There’s a good reason why U.S. and foreign security regulators require publicly traded companies to include warnings with all their public statements explaining that there are inherent risks in investing and that there are no guarantees that investors won’t lose money.

And maybe in the case of airline companies the regulators should consider requiring them to hire Garrett Morris. For those not old enough to remember the original 1975 cast of Saturday Night Live, Morris was the fellow who frequently appeared as “The headmaster of the New York School for the Hard of Hearing” who helped Chevy Chase wrap up SNL’s ground-breaking parody “news” segment, Weekend Update, by shouting, line-for-line, the summary headlines Chase had just read in a normal tone of voice. 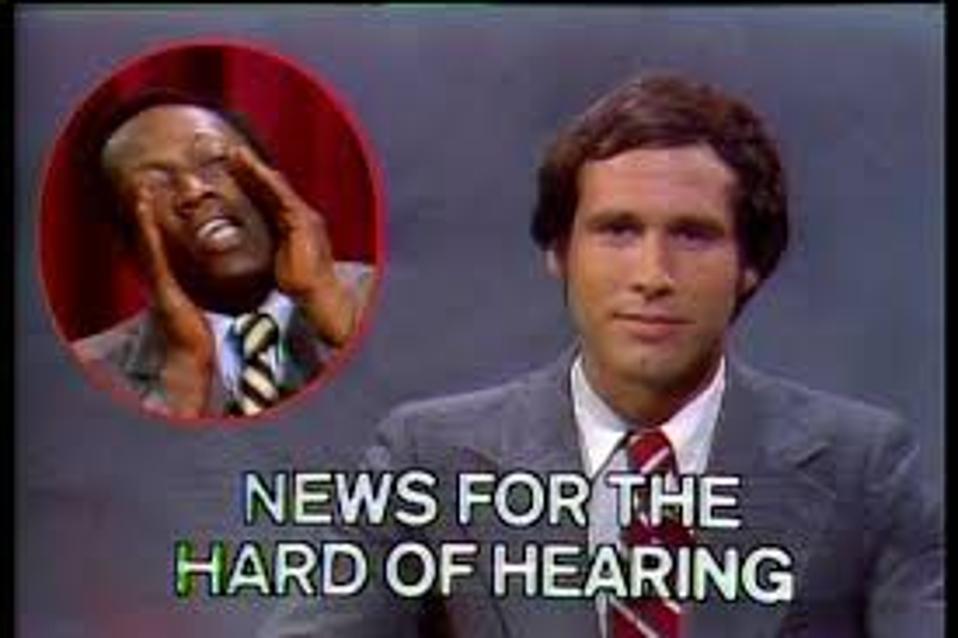 Garrett Morris shouting the News over Chevy Chase’s shoulder from a Weekend Update segment on … [+] Saturday Night Live in 1975.

That’s because investors need to be reminded, sometimes very loudly, that investing in airline shares always has been a great way to lose money. And money can be lost in airline stocks very, very quickly when anything unexpected happens in the world – like the current outbreak of the coronavirus, classified by scientists as COVID-19.

To Doug Parker, CEO at American Airlines, which of late has slipped from its long-term perch as the world’s biggest airline, that may be a surprising revelation. Just 29 months ago Parker told a group of Wall Street analysts gathered at American’s headquarters in Fort Worth that “I don’t think we’re ever going to lose money again. We have an industry that’s going to be profitable in good and bad times.”

It was a fate-tempting thing to say. Yes, thanks mostly to drastic consolidation achieved through multiple rounds of bankruptcies, U.S. carriers had by 2017 mostly resolved the chronic overcapacity, hyper-competition and huge debt loads that had made them arguably some of the world’s worst investment vehicles over the previous 75 years. But no matter how much better operated and better funded they were by 2017, airlines remained subject to incredibly high fixed costs and breathtakingly sensitive big (and even not-so-big) global economic upheavals.

And they still are subject to such upheavals, like the one now taking place as a result of COVID-19’s rapid and panic-inducing spread.  To be fair to Parker, it currently does not appear that COVID-19 and its extended economic impact will cause American itself to lose money in 2020, though its revenues and therefore its profits will shrink this year. But if the market impacts of the virus extend significantly longer than in previous global health scares an outright loss could, in fact, happen.

Still, in any case it is clear that lots and lots of investors will take a huge bath in the short term as a result of their having been holding shares of airline stock – and not just American’s stock but the stock of virtually any carrier in the world – when the word “coronavirus” first began appearing in headlines.

For all the assurances offered by Parker – and again to be fair, lots of others inside the industry – owning airline shares remains a risky proposition, albeit not quite as risky as it used to be. Indeed, for over a decade respected JPMorgan airline analyst Jamie Baker has included in nearly all his published reports the humorous but serious phrase “WARNING: Investing in airline stocks can be hazardous to your wealth.”

So now, after airline shares have spent a week way out in front of the rest of the investment world in terms of losing market value in response to the COVID-19 outbreak and economic panic, what should any investors stuck with deeply underwater airline shares do?

Theirs is a dilemma. One they might should have considered more carefully when they bought those shares, but a real dilemma in any case.

Historically, airlines always have been a leading indicator of an economic decline. That’s because the discretionary element of even business travel means that when companies begin to sense a downturn, either from their close monitoring of demand and sales data for their own products or services, or from broader market indicators or news events, they quickly begin cutting discretionary spending. And corporate air travel – the lifeblood of airlines’ cash flow and eventual profits – is among the first things cut.

Conversely, airlines historically have been a trailing indicator of a recovery. That’s because at the other end of the economic cycle, when things begin to improve, and when companies carefully and slowly begin increasing their spending again, air travel is among the last things on which they will bump up their budgets.

That’s illustrated from previous global market scares over the past 40 years – from the Chernobyl nuclear disaster in 1986 to the eruption of Iceland’s Eyjafjallajökull volcano in 2010, and from the SARS outbreak in 2003 to the global Ebola scare in 2014. In each case, airlines around the world saw dramatic reductions in passenger demand, either globally or in the immediately impacted regions around the globe. But, thankfully, in each case, the crisis passed quickly and travelers got over their fears almost as quickly. Within 90 to 270 days, in each case, investors who held onto their airline shares had recovered pretty much all their value. Their only cost, after adjusting for other economic conditions unrelated to the dramatic event itself: a slower return on their investment than they’d expected.

And, if the current COVID-19 outbreak and accompanying economic scare follow the same course, airline shareholders who keep their shares should be sitting down for Christmas dinner this year with their fears relieved.

There is, however, no way of knowing now whether the COVID-19 outbreak and economic scare will follow that same course. And that’s a great argument for why regulators need to order that extra loud warnings be added to airline shares BEFORE they’re bought by, shall we say, ill-informed investors.

Such shares may not be nearly as volatile as they used to be. But they remain plenty volatile, as illustrated in recent days when airline stocks have lost, in percentage terms, two-and-a-half times more of their value than average value lost by the stocks that make up the Dow Jones Average Index. The ARCA Airline Index is off about 25% from Feb. 19 while the Dow is off about only 10%.

Or, they could hold on to their airline shares in the belief that the COVID-19 outbreak and economic scare will follow roughly the same course as all those other disease- and global event-driven events over the past 40 years. If that happens, sometime within the next 12 months their airline investments should be back to at least even. Certainly, they will have lost the time value of their invested money, but at least they’ll be whole.

But what if they sell their airline stock now, at what may be the trough of the COVID-19 decline? Could airline shareholders find other stocks in which they could invest their money and then earn large enough returns over the next nine to 12 months to get all the way back to even? Theoretically it’s possible, but probably not without taking on at least as much risk with their new shares as they currently have in their airline holdings.

That doesn’t sound too appealing, unless of course, airline stocks this time don’t follow the quick recovery path they followed in other disease scare cases of the past.

So those currently stuck holding airline shares should probably go online to find a clip of Morris shouting Chase’s headlines from an episode of SNL’s Weekend Update back in 1975. They’ll get the joke, no doubt, even as they recognize that it’s really on them this time. Any way you look at it investing in airlines stocks still can be hazardous to one’s wealth.

Coronavirus: Can We Embrace Remote Working As The Future Of Work?