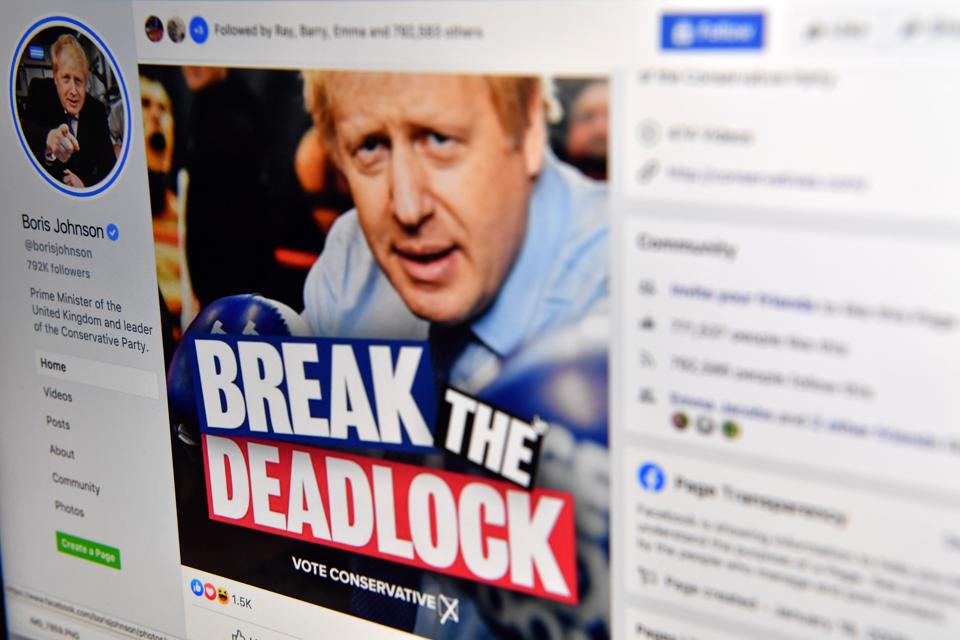 The Conservative Party spent millions on Facebook ads during the UK general election. (Photo by BEN … [+] STANSALL/AFP via Getty Images)

At the end of October, Twitter announced that it was banning political advertisements. The announcement came after its bigger rival Facebook ruled out the possibility of banning political ads on its own social network. But not only did Facebook refuse to ban political ads, but it also refused to subject such ads to fact-checking, something which critics said was necessary in view of the often deceptive nature of posts from political sources.

Well, this controversial policy appears to have had the desired effect, as the incumbent Conservative government celebrated a “crushing” victory in Thursday’s UK general election. It gained 365 seats in Parliament compared to the Labour Party’s 203, and while Prime Minister Boris claimed that the result gave his administration a “stonking mandate” for Brexit, the victory may not simply have been a result of the electorate’s desire for a swift exit from the EU.

According to research from fact-checking non-profit First Draft, 88% of the Facebook ads the Conservatives posted in the first four days of December were deemed misleading by Full Fact, one of the UK’s biggest fact-checking organisations. By contrast, First Draft said that none of the Facebook ads posted by Labour over the same four-day period contained misleading claims.

In particular, First Draft noted that 5,000 of the 6,749 ads paid for by the Conservatives contained references to the construction of 40 new hospitals. This figure was disputed by Full Fact, given that it not been costed and given that the Conservatives’ spending plans for the next Parliament had allocated funding only for six hospitals to be upgraded by 2025.

Not only that, but false claims about the cost of Labour’s spending plans to the average tax payer made an appearance in more than 4,000 Facebook ads paid for by the Conservatives, while 500 promoted the widely refuted claim that the Tories will create jobs for 50,000 more nurses, even though the promise actually includes simply retaining 18,500 nurses already on the job.

In other words, the Conservatives’ social media election strategy involved subjecting hundreds of thousands, if not millions, of voters to false ad after false ad. Perhaps voters were swayed more by the desire to progress with Brexit when casting their votes, but the simple fact that the Conservatives paid for these ‘post-truth’ ads indicates that the party believed they would have a tangible effect. If not, then why pay for them?

Yet putting aside the question of the ethics of the Conservative Party’s conduct here, much of the scrutiny must reside with Facebook and its founder, Mark Zuckerberg.

Zuckerberg is on record defending his company’s political ads policy, having argued in recent weeks that “People should be able to see for themselves what politicians are saying.” At best this is a naive take on the issue, while at worst it’s downright cynical and dangerous. It’s wrong to assume or believe that people will simply look at misleading or false ads and quickly realise that they and the people who wrote them are lying.

Because once again, the fact that certain political parties pay for thousands of untruthful ads indicates that such parties truly believe that much of the public will believe the lies said ads peddle. They do not think, “Let’s allow people to see what misleading statements and lies we’re propagating.” No, they think, “Let’s lie to the public and hope our lies convince the public to vote for us.”

If Mark Zuckerberg is an intelligent person (and there’s no reason to think he isn’t), he will be well aware of this. And the fact that he doesn’t change Facebook’s policy to prevent political misinformation suggests that he’s happy with his social network being used – on an industrial scale – to disseminate such misinformation.

As the First Draft report indicates, it’s a right-wing party that has spread much more misinformation than its centrist and left-wing rivals. Similar studies suggest that right-wing parties are more likely to use Facebook to spread untruths and outright lies (cf. Brazil’s 2018 presidential election), and it’s arguable that this is a trend Zuckerberg is happy to profit from and facilitate.

That’s because it’s left-wing parties, candidates and intellectuals that are threatening to regulate Facebook, tax it, break it up, or even nationalize it. Indeed, secret recordings leaked in October reveal that, in response to Elizabeth Warren’s threats to regulate and break up Facebook, Mark Zuckerberg is gearing up for a ‘fight’ with any organization or government that might attempt to restrict its cancerous growth.

“But look, at the end of the day, if someone’s going to try to threaten something that existential, you go to the mat and fight,” he said, in a speech to Facebook employees that also saw him indicate that he’d be prepared to sue the US government, should it attempt to follow through with any policies such as Warren’s.

It gets worse, because (also in October) Politico revealed that the Facebook CEO had been holding meetings with conservative journalists, commentators and even a Republican lawmaker. These meetings related to issues of ‘free speech’, and appeared to be an attempt by Zuckerberg to woo elements of the right, and to assure the right that Facebook would support its efforts to the use the social network to communicate with the public.

“The White House is looking for meaningful steps from Facebook on a number of fronts,” a senior Trump administration official told Politico, clarifying that these fronts included “competition, free speech for everybody including conservatives, and privacy.”

This is potentially ominous, because in conjunction with Zuckerberg’s apparent opposition to attempts to regulate or tame Facebook, they appear to indicate that the social network’s political allegiances are shifting to the right, at a time when far-right governments are in the ascendence internationally.

But regardless of how true this is, the fact that Facebook refuses to fact-check political ads does not reflect well on the social network. Because combined with the fact that the Conservative Party has just used thousands of misleading Facebook ads to help it win another UK election, it reveals that in strictly functional terms, Facebook is indistinguishable from a social network that is avowedly and openly in favor of right-wing governments and politics.

Female Footballers Are One Step Closer To Professional Status In Italy

REIT Credit Profiles Are Stronger Than Ever, According To Fitch

Eager For The Results Of The Nevada Caucus?...