Breaking
No, There Isn’t A Black Hole At The...
The Fed Could Be Repeating This Key Mistake...
Japanese Lawmaker Becomes Billionaire By Selling E-Signature Services...
4 Tips For Attracting Your First ‘Dream Client’...
Want To Generate More Sales This Holiday Season?...
Your ‘Harvest Moon’ Moment Is An Illusion: Why...
Google Meet’s Unlimited Calling Will Continue To Be...
The Need For Speed-Is Quantum Computing A Good...
Stock Market Crash: The End Game Approaches
Best Video Conferencing Software
House Democrats Debate Bill To Allow Student Loan...
For These Indigenous Artists “Land Back” Is Both...
The Current Tech Stock “Bubble” Reflects Pessimism, Not...
A Look At What’s Inside House Democrats’ New...
Page Authority 2.0: An Update on Testing and...
How Public Health Experts Are Harnessing The Power...
Home Business Three Areas The Arizona Cardinals Need To Address In Free Agency
Business 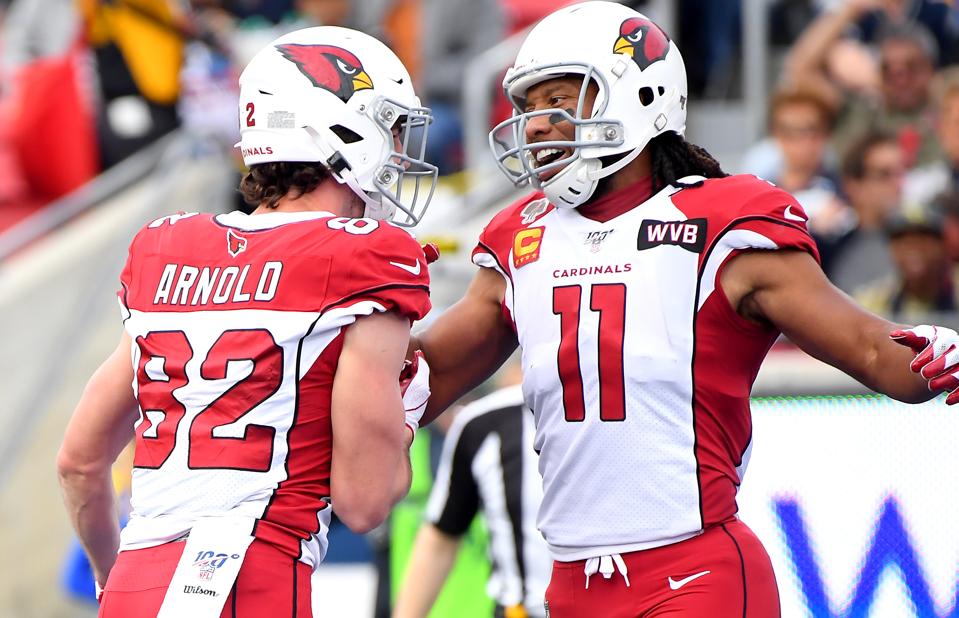 LOS ANGELES, CA – DECEMBER 29: Wide receiver Larry Fitzgerald #11 celebrates with tight end Dan … [+] Arnold #82 of the Arizona Cardinals after a touchdown in the game against the Los Angeles Rams at the Los Angeles Memorial Coliseum on December 29, 2019 in Los Angeles, California. (Photo by Jayne Kamin-Oncea/Getty Images)

The Arizona Cardinals had an interesting 2019-2020 season to say the least. The team barely improved their win totals from last year (three wins to five) but look a lot more competitive in nearly every game. The team rallied and won two of their last three games, led by the brilliant, albeit slightly inconsistent, play of offensive rookie of the year quarterback Kyler Murray. Now, with plenty of cap space according to Spotrac and plenty of holes to fill, the Cardinals have every reason to build a contender this offseason.

Other than wide receiver Larry Fitzgerald and Christian Kirk, the team needs another consistent playmaker. Even though the Cardinals spent plenty of draft capital last year on offensive players, Murray was the only one to stand out from the rest. The young players they drafted could shine this upcoming season but at this moment, the team needs to provide Murray with more offensive talent.

David Johnson was supposed to be that dual threat playmaker but he underperformed with the team and Arizona traded for Miami running back Kenyan Drake to provide help. Drake is a free agent this season and could be resigned by the team but after this tweet from Drake, his future in Arizona a bit more hazy. The team could go after running backs like Melvin Gordon, Jordan Howard, or Carlos Hyde but each could cost more than Drake.

There’s plenty of options available for Arizona. Cowboys wide receiver Amari Cooper is expected to hit the open market as Dallas looks to keep him and quarterback Dak Prescott. He’ll be on the top of a lot of team’s prized focus due to his potential, age and skill. Vikings receiver Stefon Diggs was recently seen wearing Cardinals gear as he worked out. It’s a bit of a stretch to say that’s means he only wants to go to Arizona but it might be enough to warrant a call. Tight end Austin Hooper has been on and off for the Altanta Falcons but given the lack of talent Arizona has at that position, he might be another target.

The Cardinals offensive line is one of the worst in the league and a big factor to the inconsistent play of Murray and the running game. The team struggled to keep pressure away from Murray and forced him to run for his life so often. While he’s an elite runner and can make plays on his feet, placing him in that situation can lead to an injury. The failure of the running game also forced more pressure on Murray. The team failed to open up holes and struggled to get to the next level consistently.

Titans offensive tackle Jack Conklin is perhaps the best offensive linemen in free agency this year and with Derrick Henry and Ryan Tannehill set to be free agents, he could be the odd man out. He had a strong 2019 season and is still in the middle of his prime. If Conklin isn’t the best offensive lineman available, then Redskins guard Brandon Scherff fills that spot. The 28-year old is set to be a free agent, barring a franchise tag from Washington. He’s a mauler and played well each season. Him and Conklin could help revamp the Cardinals offensive line should the team play aggressive this offseason.

Chandler Jones is one of, if not the best pass rusher in the league. He’s been consistently providing pressure on quarterbacks and forcing them to make bad decisions or eat a sack. However, the team has struggled to provide him with support on his opposite side.

The big problem with this position is how each team is quick to not let their pass rushers hit the market, especially if they’re in their primes. One player who will hit free agency is Seahawks Jadeveon Clowney. The former number one overall pick has all the potential in the world and can be a game changing threat off the edge. His long injury history could deter some teams and most likely played a role in Houston and Seattle not signing him to a long term deal but Arizona might be willing to risk it.

One player who had a terrific season that’s set to be a free agent is Buccaneers Shaquil Barrett. He had 19.5 sacks his first season with the Buccaneers after signing a one-year deal. He’s a risky player due to this being the first year he’s had this level of success but he can easily fit the role Arizona needs to fill. There are other players available like Leonard Williams and Vic Beasley Jr. but each aren’t coming off the same success like Barrett.

These are the biggest concerns that the team needs to fill up this offseason. There’s other holes the team needs to address like secondary help, linebacker play and interior run defense. However, these three positions will be the ones that’ll command the biggest cap space. With free agency and the draft coming up, the Cardinals have plenty of chances to add some immediate impact players and turn their fortunes around for the 2020-21 season.

Using Or Driving Rideshare During The Coronavirus? Stay Safe With These Tips