Three Industries That Are Being Decimated By The Coronavirus

Three of the hardest hit industries from the coronavirus are the airlines, hotels and restaurants. They have all seen dramatic drops in their revenue and no amount of planning or financial reserves can shield them from what is occurring. Which means the business hardship will lead to a huge number of layoffs.

Besides the current challenges, even when this pandemic is under control it will probably take months if not a year or two for business to get back to the level it was before. For the airline industry The Harris Poll found, “only one in six (15%) Americans saying they’ll fly within a month after the government signals that COVID-19 is abating. Another 16 percent (31% combined) say they’ll fly within three months. Worryingly, only about half of Americans (49%) think they’ll be ready to fly at the six-month point.”

Time needed to return to an activity

In 2019 U.S. Delta, American, United, Southwest, Alaska, JetBlue, Hawaiian, Spirit, and Allegiant generated $184 billion in revenue and about $20 billion in profit, up from $175 billion in revenue and $17 billion in profit for 2018 per Skift. However, 2020 is going to be a very different year for the airlines. One data point showing the magnitude of the drop off is the number of airport travelers the TSA screens. On Thursday, March 26, there were over 90% fewer screenings done than a year ago. 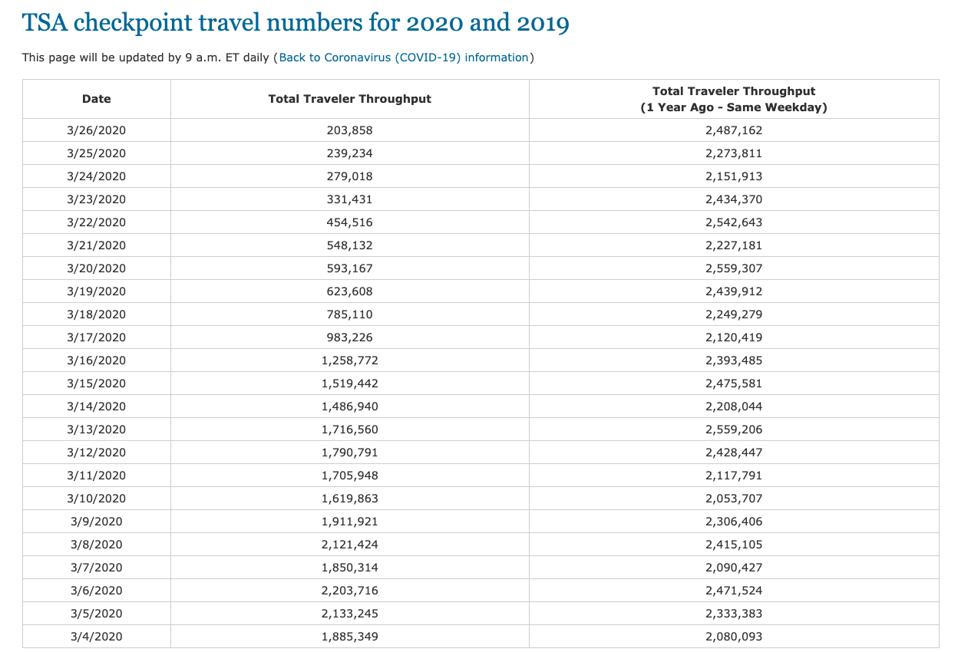 Another segment of the airline industry that will pull back are the airports. Per Skift the country’s top 50 airports have budgeted about $35 billion in capital spending this year. Since airport‘s revenue is dependent on the number of travelers and flights, this amount will certainty fall. 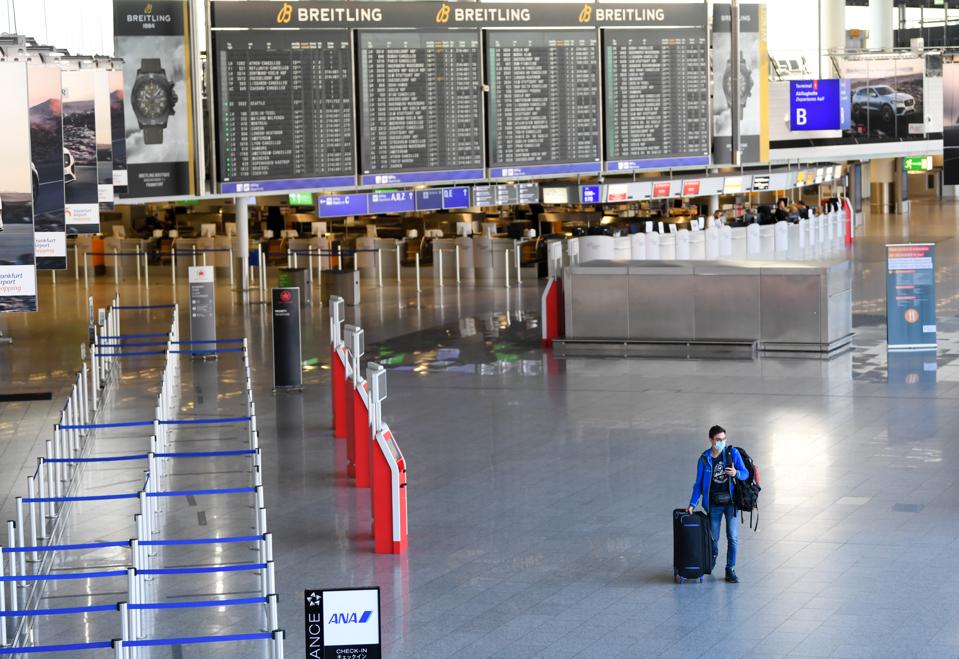 At Frankfurt Airport, a passenger walks through the empty departure. (Photo by Arne Dedert/picture … [+] alliance via Getty Images)

The International Air Transport Association or IATA is estimating that there will be 1.1 million flight cancellations by June 30 and a loss in passenger revenue of $252 billion for the year, down 44% for worldwide airlines. The hit to North American airlines (U.S. and Canada) is forecast to be $50 billion.

What is especially frightening is the low amount of cash the airlines had on hand before the pandemic hit. With a median amount of two months or less to fund their operations, the airlines will quickly burn through it without government help.

Number of months airlines have cash

The pandemic is another blow to Boeing after having two of its 737 MAX planes crash. As can be seen in the graph below (through September 2019) it had more cancellations than orders last year and is probably on track for a similar or worse outcome this year. 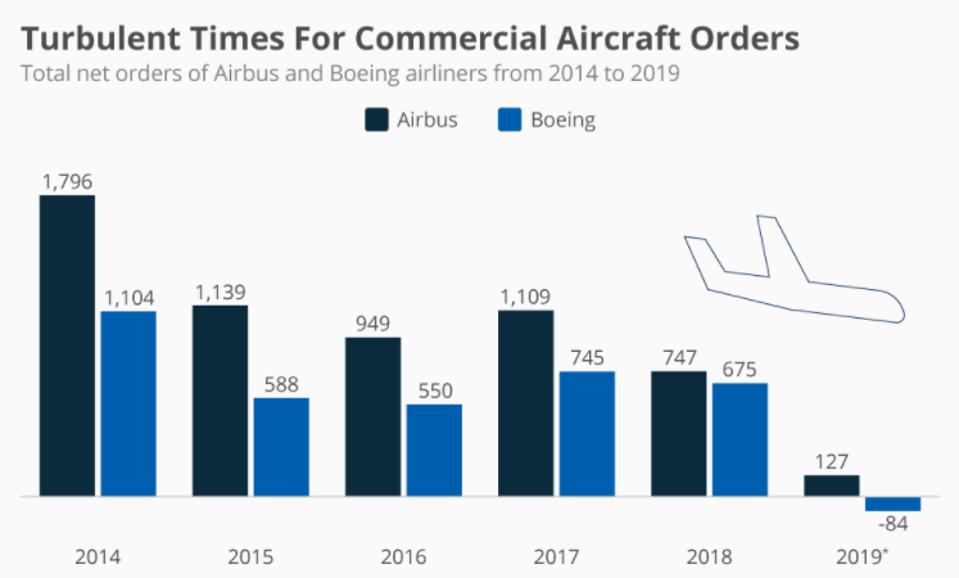 Hotels have millions of empty rooms

The hotel industry employs 2.5 million people directly and 8.3 million in total. It has 3.5 million room nights every night and contributes over $650 billion in yearly GDP per the American Hotel & Lodging Association and Oxford Economics. To get a feeling on the coronavirus’ impact below is a comparison to the recessions from 9/11 and 2001 and the Great Recession. In both of those occupancy rates fell to 59% and 54%, respectively, with job losses of 400,000 and 470,000, respectively.

COVID-19 is a whole different story. In a press release on March 18 Marriott announced, “While occupancy levels in Greater China are still under 15 percent today, this is an improvement, and trend lines are pointing in the right direction.” It added, “North America and Europe have seen occupancy levels below 25 percent over the last few days, compared to around 70 percent a year ago.” Other hotels are seeing similar if not larger declines in occupancy.

Restaurants have already laid off over 3 million people

Forty-two of fifty states have banned dine-in service, which is a huge hit to the restaurant industry. Many are trying to generate some revenue by increasing take out service, but this still falls far short of the revenue they had been generating. 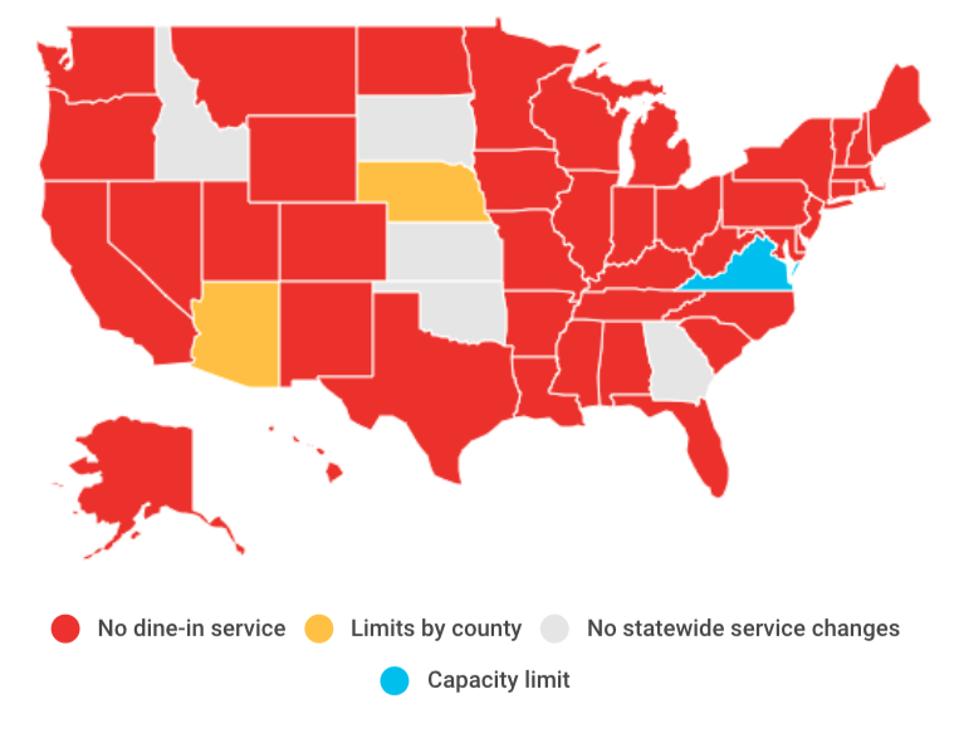 The National Restaurant Association surveyed 4,000 of its members and found:

Hudson Riehle, the Association’s senior vice president of research, said, “Association research found that 54% of operators made the switch to all off-premises services; 44% have had to temporarily close down. This is uncharted territory.” He added, “The industry has never experienced anything like this before.”

Based on the survey results, the National Restaurant Association estimates that during the first 22 days of March, the restaurant industry lost an estimated $25 billion in sales and more than 3 million jobs.

Another indication of the collapse of restaurants’ business is the graph from Statista showing OpenTable’s reservations at its almost 60,000 partners. From March 1 to March 21 there has been a nearly 100% decline in diners making reservations through the app. The 3 million that have already been laid off may wind up being a small percentage of the eventual total. 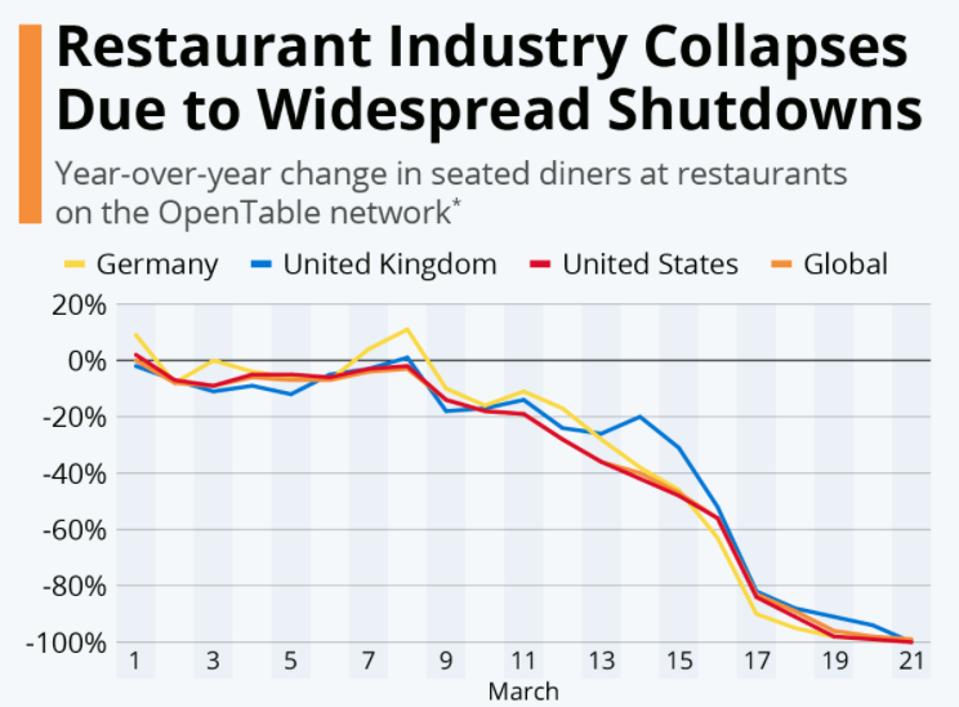 There Will Be No ‘Messiah’ Season 2 On Netflix, No Resolution For Its Cliffhangers

How To Pay Your Student Loans During Coronavirus

Where Have All The Stock Market Bears Gone?