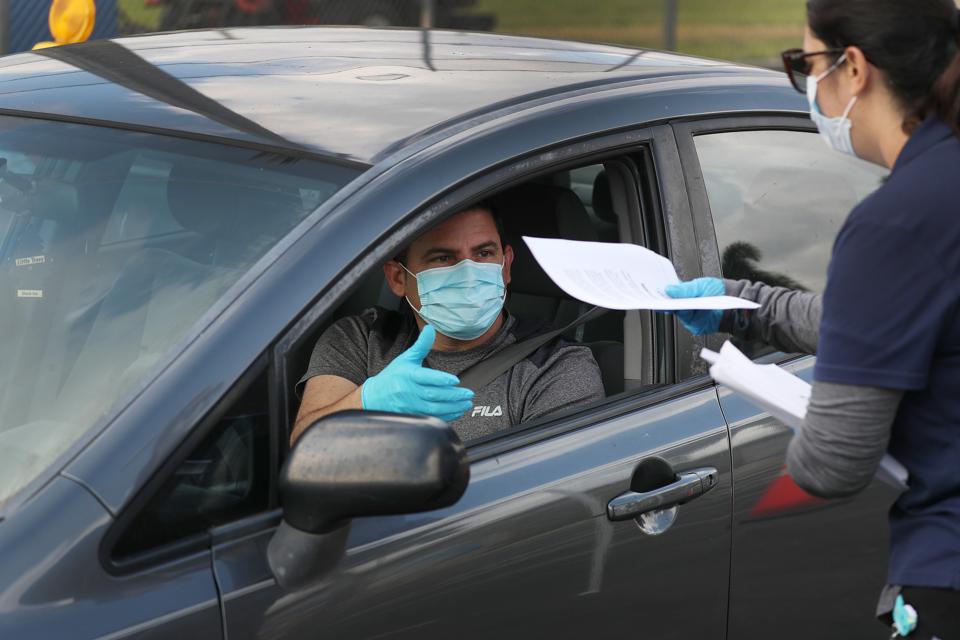 A person in his car is handed an unemployment application being given out by City of Hialeah … [+] employees in front of the John F. Kennedy Library on April 8, 2020, in Hialeah, Florida.

As the coronavirus crisis drags on in the United States, with nearly 500,000 cases now confirmed, nonessential businesses like retailers and restaurants are shutting their doors, and workers are losing their jobs at an unprecedented rate. Under the $2 trillion emergency rescue legislation signed into law by President Trump, workers who have been laid off are eligible for enhanced unemployment benefits and $600 extra each week for the first four months.

As workers are laid off by the millions, states have become overwhelmed by the volume of requests. On Wednesday, when Florida’s online and phone unemployment systems crashed due to high demand, hundreds of people waited in line in person to fill out paper forms. And New York is getting help from Google to overhaul its benefits system, which couldn’t handle the crush of new applications either. Analysts are predicting that job losses will continue to accelerate in the coming weeks.

Here are three numbers that sum up the unemployment crisis:

Over the last three weeks, more than 16.7 million people have filed for temporary unemployment benefits, according to the Labor Department. That number is likely low, since certain states like Florida and Texas have only recently closed nonessential businesses and many workers are still struggling to file claims to state unemployment offices that are overwhelmed by demand. In the last week alone, a revised 6.9 million people filed claims. For some perspective, the most weekly claims ever recorded was 695,000 in 1982. In March 2009, during the height of the financial crisis, claims reached 665,000. Between 2007 and 2009, over a period of 18 months, the Great Recession wiped out 15 million jobs.

The unemployment rate in March ticked up to 4.4% from 3.5% in February, as employers cut 701,000 workers from their payrolls (the first payroll decline since 2010), but that data doesn’t yet reflect the full magnitude of the millions of job losses the United States has seen over the last three weeks. Since the survey for the March report was conducted in the middle of the month, April’s numbers will be more indicative of the true scope of job losses. Analysts expect that number to be somewhere in the teens.

The coronavirus outbreak could cost 47 million jobs this quarter, according to estimates by the Federal Reserve Bank of St. Louis. That would translate to an unemployment rate of 32.1%, well above the 24.9% rate during the Great Depression. Moody’s analysts are forecasting that 45 million jobs could be at risk, including three quarters of workers in the hospitality and construction industries, the New York Times reports.

Business Resiliency In The Time Of Coronavirus, Part 2

The Time Is Now To Lower The Medicare Age To 50