TIME’S UP Reacts To Harvey Weinstein Verdict: ‘This Marks A New Era Of Justice’ 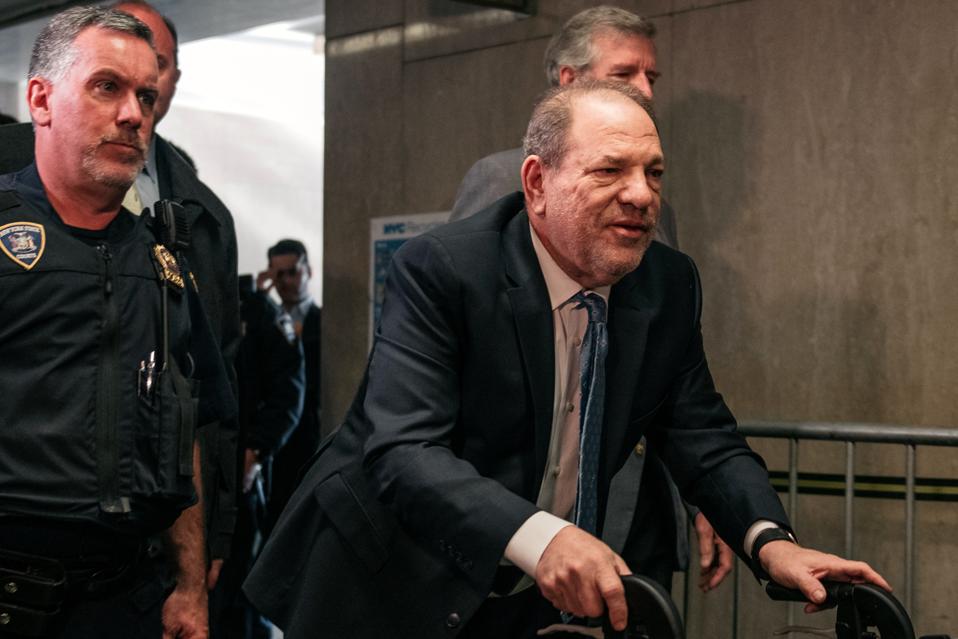 Victims of any type of sexual abuse or misconduct were rattled this morning when the news of a verdict in the Harvey Weinstein case broke after little more than four solid days of deliberations.

Of the five charges, Weinstein was found guilty of two: Criminal Sexual Act Assault and Rape in the Third Degree.

He was found not guilty of three of the charges: two counts of Predatory Sexual Assault, which were the most severe charges and a unanimous verdict was needed to convict, as well as Rape in the First Degree.

Early on in the deliberations, the jury had several questions for the judge and seemed to be at an impasse on certain charges and their meanings. However, today’s verdict still sends a very clear message.

The TIME’s UP Foundation had a swift reaction, saying that the “Weinstein guilty verdict marks a new era of justice.” And, despite the three charges of which Weinstein acquitted, today’s verdict did pave a path towards positive change as the disgraced movie mogul was found guilty of a criminal sex act in the first degree and on rape in the third degree and he still faces charges in an upcoming Los Angeles case.

“This trial — and the jury’s decision today — marks a new era of justice, not just for the Silence Breakers, who spoke out at great personal risk, but for all survivors of harassment, abuse, and assault at work,” said Tina Tchen, president and CEO of the TIME’S UP Foundation. “We owe a debt of gratitude to Mimi Haleyi, Jessica Mann, Annabella Sciorra, Dawn Dunning, Tarale Wulff and Lauren Young and all the Silence Breakers for their bravery and resolve as they faced this man in court. We continue to believe them — all of them — and continue to be in solidarity with them.”

Tchen continued to add just how strong a message this jury sent with its findings. “The jury’s verdict sends a powerful message to the world of just how much progress has been made since the Weinstein Silence Breakers ignited an unstoppable movement. In two short years, TIME’S UP helped pass new laws to help survivors achieve justice, helped thousands of individuals take on harassers and abusers in court, and changed the game when it comes to how matters of safety and equity in the workplace are understood.”

Though today marks a step in the right direction, there is still much more work to be done. “While we celebrate this historic moment, our fight to fix the broken system that has allowed serial abusers like Harvey Weinstein to abuse women in the first place continues,” adds Tchen. “Abusers everywhere and the powerful forces that protect them should be on notice: There’s no going back.”

In its statement, TIME’s Up included statistics from a CBS News poll released in January 2020 that found the majority of U.S. adults feel the TIME’s UP and #MeToo movements are changing how men and women view, talk about and respond to incidents of sexual misconduct.

According to the poll, more than half (52%) of young men 18-29 say these movements have made them rethink how men behave toward women and 29% of working women say they’re more likely to report sexual harassment in the workplace than they were before.

Tragically, the vast majority of sexual assaults are never reported to authorities in the first place and only a fraction of those that are reported result in conviction. RAINN estimates that out of every 1,000 sexual assault cases, 995 perpetrators will walk free.

The New York case was hindered by the state’s previously short statute of limitations laws, which shielded many Weinstein cases from prosecution. Alongside other advocates, TIME’S UP and successfully worked with state lawmakers to lengthen the statute of limitations for rape in the third degree in 2019. However, the change is not retroactive, so New York State prosecutors were limited in the number of charges they could file.

Overall, between 80 and 90 women have accused Weinstein of sexual harassment or assault, yet prosecutors were only able to bring charges in a couple of cases due to New York State’s extremely short, five-year statute of limitations on Rape in the Third Degree (sex without consent).

Many victims of sexual assault suffer from shame and fears of retaliation and thus, it can take years to even process the trauma that has occurred, yet alone go to the authorities for help. Hopefully, at some point in time, when we speak of a statute of limitations, we will refer to them as something of the past.

Looking Ahead: Building Around Luka Doncic And Kristaps Porzingis

What Is Really In Your Food? TeakOrigin Guide...

How And When To See The ‘Super Flower...

Classic Reading For our Quarantined Times

Booker T. Jones On Looking Back With New...

Using The EITC To Help Fight An Economic...