Breaking
Channel Your Impact With a Self-Directed IRA
How To Reach Your Customers This Holiday Season
TikTok Will Limit And Label Videos Prematurely Claiming...
How A British Graphic Novel Publisher Is Leading...
Dow Plunges 600 Points On Third Day Of...
According To A New Study, Patients Are Texting,...
How To Keep Your Digital Media Assets Secure
Be Better At Building Your Team
Saying No In Order To Grow
Sherwin-Williams Stock Is Unlikely To Sustain Its Current...
How Successful Entrepreneurs Use The Law Of Attraction
Elon Musk’s Economics 101 Course For Japan
Raoul Pal: Gold Investors “Will Flip To BTC”...
Dating Site Takes On Social Media Dangers Of...
Trump Campaign Website Hacked In Cryptocurrency Scam
How To Reduce The Stress Of Loneliness–9 Tips
Home Technology To Colonize or Not to Colonize – That is the Question (For All of Us)
Technology 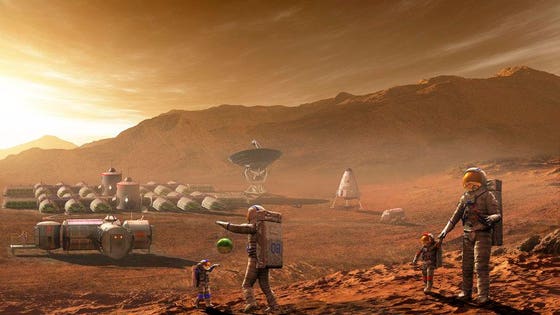 It’s time to ask ourselves the big question: Should we try to colonize our solar system, or not?  I’ll readily admit I’m for it, and I suspect a large portion of the space community would stand with me – but this isn’t the space community’s decision, or in fact, any single nation’s decision. A broad consensus of commercial, civil, defense, and international parties will be essential to an undertaking of this magnitude and complexity. Think of it – we’re considering moving large numbers of humans off their home planet, potentially not only for the rest of their lives, but for the lives of their descendants.

It’s important to distinguish between colonize and explore. Exploration already enjoys broad approval here in America. In June 2019, 77% of U.S. respondents told Gallup pollsters that NASA’s budget should either be maintained or increased – undeniable evidence of support for the American space program(as it’s currently constituted). By any measure, we’ve done an admirable job of surveying the solar system over the past sixty years – an essential first step in any comprehensive program of exploration. Unmanned probes developed and launched by theUnited States and the Soviet Union conducted flybys of the Moon and the terrestrial planets not long after we reached Earth orbit, and since then, we’ve flown by the outer planets. Multiple nations have placed increasingly sophisticated robotic emissaries on the surfaces of the Moon, Mars, Venus, and Saturn’s largest moon, Titan.

Most stunningly, in a tour de force of technology and Cold War chutzpah, the U.S. dispatched humans to set foot on another world, just fifty years and a few months ago. But after only six such visits, we never returned.  Moon habitats in lava tubes, crops under glass domes, ice mining at the south pole? No. NASA’s Artemis program may place a man and a woman on the Moon again in 2024. But that’s hardly colonization. For perspective, let’s look closer to home.

Sailors from an American vessel may have landed on Antarcticaas early as 1821 – the claim is unverified – but no scientific expeditions “wintered” there for another 75 years. The first two of these, one Belgian and one British, endured extreme cold and privation – one inadvertently, the other by design. And yet, 200 years after the first explorer set foot on the continent, there are no permanent settlements (partially as a result of a political consensus reached in the late 1950s, but in no small part due to the difficulty of extracting resources such as ore or fossil fuels through kilometers of ice). Less than 5,000 international researchers and support staff comprise the “summer population” at the bottom of the world. That number dwindles to just 1,100during the harsh Antarctic winter, requiring millions of tons of supplies and fuel to be delivered every year – none of which can be produced locally. To suggest that Antarctica is colonized would be far overstating the sustainability of human presence there.

If Antarctica is hard, the Moon, Mars, asteroids, and interplanetary space will be punishingly difficult.  Writing in Gizmodo this past July, George Dvorsky describes the challenges to a human colony posed by low gravity, radiation, lack of air and water, and the psychological effects of long-term confinement and isolation inside artificial structures, in space or on planetary surfaces.  Add to this the economic uncertainties of such a venture – where the modern analog of a Dutch or British East India Company would face enormous skepticism from investors regarding the profitability of shipping any good or finished product between colonial ports of call – and it becomes clear why nation states and mega-corporations alike have so far resisted the temptation to set up camp beyond geosynchronous orbit.  Perhaps, many argue, we should focus our limited resources on unresolved problems here at home?

Yet a wave of interest in pursuing solar system colonization is building, whether its initial focus is the Moon, Mars, or O’Neill-style space habitats.  Jeff Bezos has argued eloquently for moving heavy industry off the home planet, preserving Earth as a nature reserve, and building the space-based infrastructure that will lower barriers and create opportunities for vast economic and cultural growth (similar to how the Internet and a revolution in microelectronics has allowed Amazon and numerous other companies to achieve spectacular wealth). Elon Musk and Stephen Hawking both suggested the need for a “hedge” population of humans on Mars to allow human civilization to re-boot itself in the event of a catastrophe on Earth – an eggs-in-several-baskets approach which actually complements the arguments made by Bezos. And while both are valid reasons for pursuing colonization, there’s a stronger, overarching rationale that clinches it.

I’ll assert that a fundamental truth – repeatedly borne out by history – is that expanding, outwardly-focused civilizations arefar less likely to turn on themselves, and far more likely to expend their fecundity on growing habitations, conducting important research, and creating wealth for their citizens.  A civilization that turns away from discovery and growth stagnates – a point made by NASA’s Chief Historian Steven Dick as well as Mars exploration advocate Robert Zubrin.

As a species, we have yet to resolve problems of extreme political polarization (both internal to nation states as well as among them), inequalities in wealth distribution, deficiencies in civil liberties, environmental depredations, and war. Forgoing opportunities to expand our presence into the cosmos to achieve better outcomes here at home hasn’t eliminated these scourges. What’s more, the “cabin fever” often decried by opponents of colonization (when applied to small, isolated outposts far from Earth) turns out to be a potential problem for our own planet. Without a relief valve for ideological pilgrims or staunch individualists who might just prefer to be on their own despite the inevitable hardships, we may well run the risk ofexacerbating the polarization and internecine strife we strive so hard to quell.  Focusing humanity’s attention and imagination on a grand project may well give us the running room we need to address these problems. But the decision cannot be made by one country, or one company, or one segment of the human population. If we do this, it will of necessity be a truly international endeavor, a cross-sector endeavor (with all commercial, civil, and defense interests engaged and cooperating).

The good news: Critical technologies such as propulsion and power generation systems will improve over time.  Transit durations between celestial destinations will shorten (in the same way sailing vessels gave way to steam ships and then to airlinersand perhaps, one day, to point-to-point ballistic reusable rockets). Methods for obtaining critical resources on other planets will be refined and enhanced. Genetic engineering may be used to better adapt humans, their crops, and other biota to life in space or on other planetary surfaces – to withstand the effects of low or micro-gravity, radiation, and the psychological effects of long-duration spaceflight.

As nation after nation lands their inaugural exploratory vessels on our Earth’s moon, and as billionaire space enthusiasts race to launch passengers, satellites, and other cargo into orbit, it’s clearly time for us to sit down as a species and debate whether our future will be one highlighted primarily by growth and discovery, opening the solar system to settlement and economic development, or one that eschews outward expansion forconservation and preservation. Doing so would allow us to focus our attentions on this planet, leaving the solar system in its natural state, a celestial Antarctica stretching beyond Neptune.

I vote for growth. But one person, or one company, one community, one nation, isn’t a plurality here. This debate – postponed for more than fifty years – is one worth having. Humanity’s future will be decided by its outcome.

The Apprentice Final: How To Pitch Your Business Like A Winner