Breaking
Florida Supreme Court Tells The American Bar Association...
How to Write Perfect Paid Social Media Marketing...
How To Boost Productivity In Your Small IT...
How Restaurants Can Design a More Sustainable Food...
Expenses That Small Business Owners Need to Be...
How You Can Make Saying Goodbye To The...
Biden To Meet Royal Family At Cornwall’s Eden...
It’s Going To Be Emotional — Going International...
Peer Mentoring For Students: STEM & Buds
7 PR Trends in 2021: The Story So...
Google Plans Radical New Google Pixel Smartphone Upgrade
Where Did COVID Come From?
Ride To Growth With A Business Vehicle
C3.ai’s Tom Siebel: How To Scale AI
Moz Acquired by iContact Marketing Corp
10 Examples of Brands Using TikTok Stitch and...
Home Business Today Should Be Wanamaker Organ Day 2020, But Macy’s Is Still Closed
Business

Today Should Be Wanamaker Organ Day 2020, But Macy’s Is Still Closed 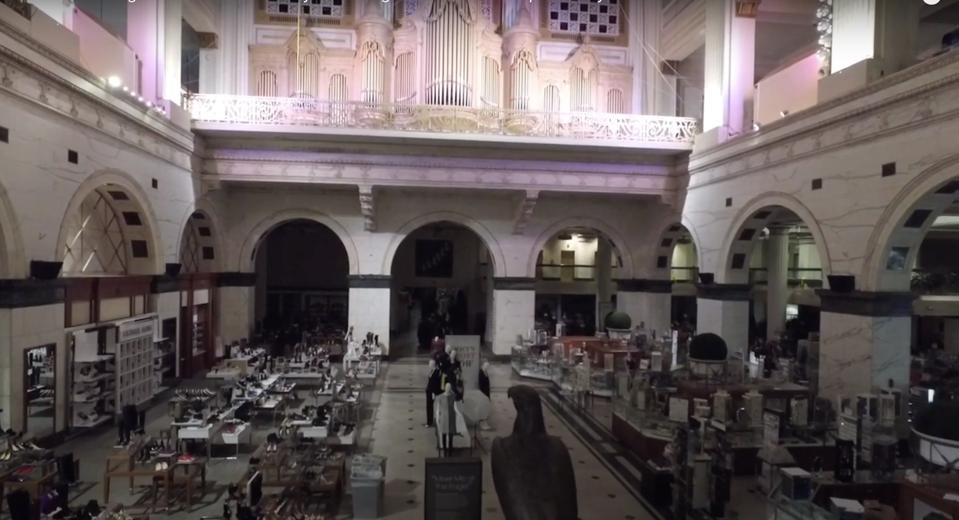 A drone image, taken in 2015, shows the Wanamaker Organ and the Grand Court after business hours. … [+] The Wanamaker Organ is located in the Center City Philadelphia Macy’s. The store closed on March 17, 2020 due to COVID-19.

Friends of the Wanamaker Organ

It is eerily quiet inside the Center City Philadelphia Macy’s M store, home of one of the world’s largest pipe organs. Today is supposed to be the 27th Wanamaker Organ Day. But since Macy’s is closed due to COVID-19, the annual event was cancelled.

The Wanamaker Organ, with over 28,000 pipes, is one of Philadelphia’s beloved landmarks. It towers over the store’s famous Grand Court, which also houses a 2500-pound bronze eagle. The popular Christmas Light Show, held in the Grand Court, has been a cherished holiday tradition since 1956. The twice-daily organ recital concerts, have been held continuously since the building opened in 1911.

Wanamaker Organ Day is traditionally held on the first Saturday after Memorial Day. When the store was forced to close in Mid March, today’s program had not been finalized. Past Wanamaker Organ Day celebrations have included organ recitals throughout the day, often performed with guest artists and supplemented by local musical organizations. An afternoon silent movie, performed with live organ accompaniment, has often been shown in the store’s Greek Hall auditorium. Behind-the-scenes tours of the Organ Shop, pipe chambers, and console have played roles in past activities. 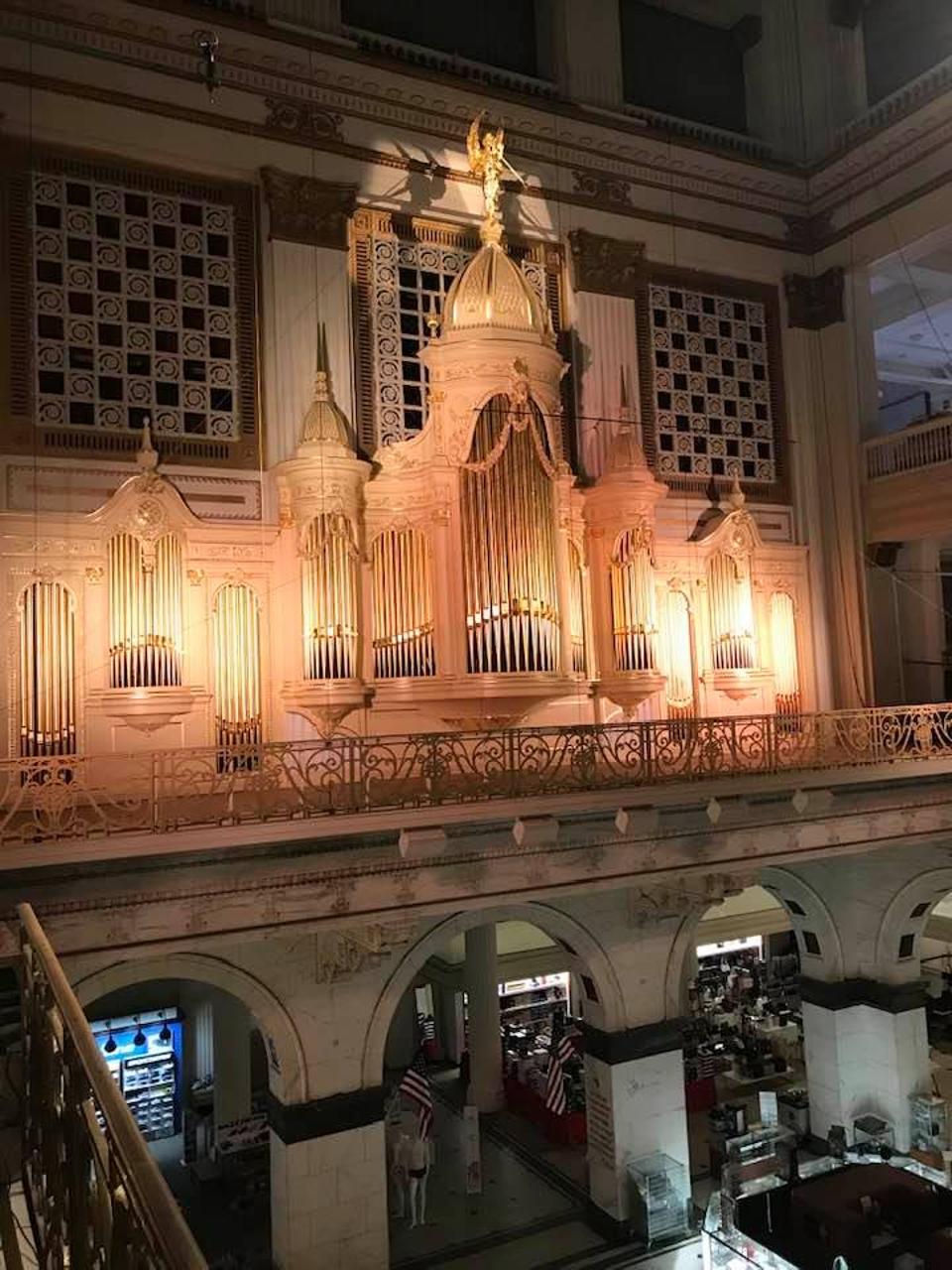 The Wanamaker Organ sits silently in an image taken on March 24, 2020, one week after the Center … [+] City Philadelphia Macy’s quickly closed due to COVID-19. The organ overlooks the store’s main selling floor.

As per Governor Tom Wolf’s orders, the Center City Philadelphia Macy’s closed for business on March 17. Unlike big-box retailers, department stores were not deemed “essential” by the governor’s mandate. The department store’s closure was sudden. Senior store management rushed to clean selling spaces and unload merchandise from delivery trucks. Within just a few hours of the governor’s order, the Center City Macy’s was locked and its alarms were set.

On March 24, Organ Curator Curt Mangel was allowed access to the closed department store and retrieved a set of keys from the store’s Organ Shop. Mangel also removed some organ materials that could be restored offsite. In addition, he went to the store’s closed-for-the-season Dickens Christmas Village exhibit and retrieved large quantities of hand sanitizer and plastic gloves and subsequently donated them to the nearby Jefferson Hospital. Mangel has been the only staff member to see the organ during the past ten weeks. This year’s Wanamaker Organ Day festivities included a retirement dinner for Mangel.

Although the Wanamaker Organ has been silent for ten weeks, it is not a historical first. There have been a handful of instances when the instrument was quiet during periods of restoration or store construction projects. 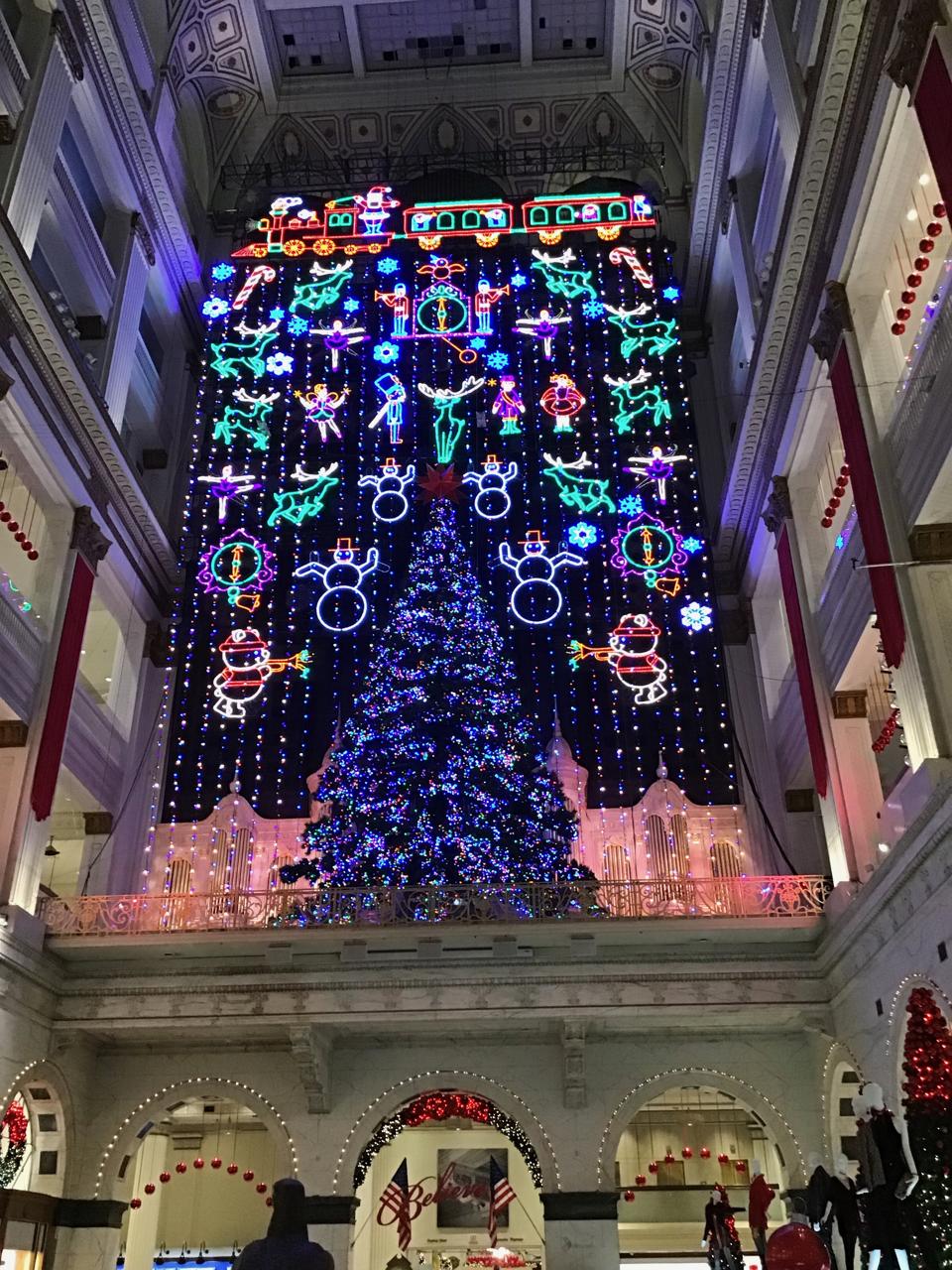 The Christmas Light Show at the Philadelphia Macy’s is shown on December 10, 2019. The Wanamaker … [+] Organ can be seen just above the balcony level. The building’s famed architect, Daniel Burnham, also designed the ornate organ case.

The Center City Macy’s was originally home to the John Wanamaker flagship department store. Designed by famed architect Daniel Burnham, it operated under the Wanamaker nameplate from 1911 up until 1995. After the department store was sold, the business became Hecht’s, followed briefly as a second Center City Strawbridge’s store. A 1997 transition to a Lord & Taylor store reduced selling space to only three floors. Macy’s took over in 2006 and has remained committed to the Wanamaker Organ. The department store maintains an onsite Organ Shop and funds the daily recital series. 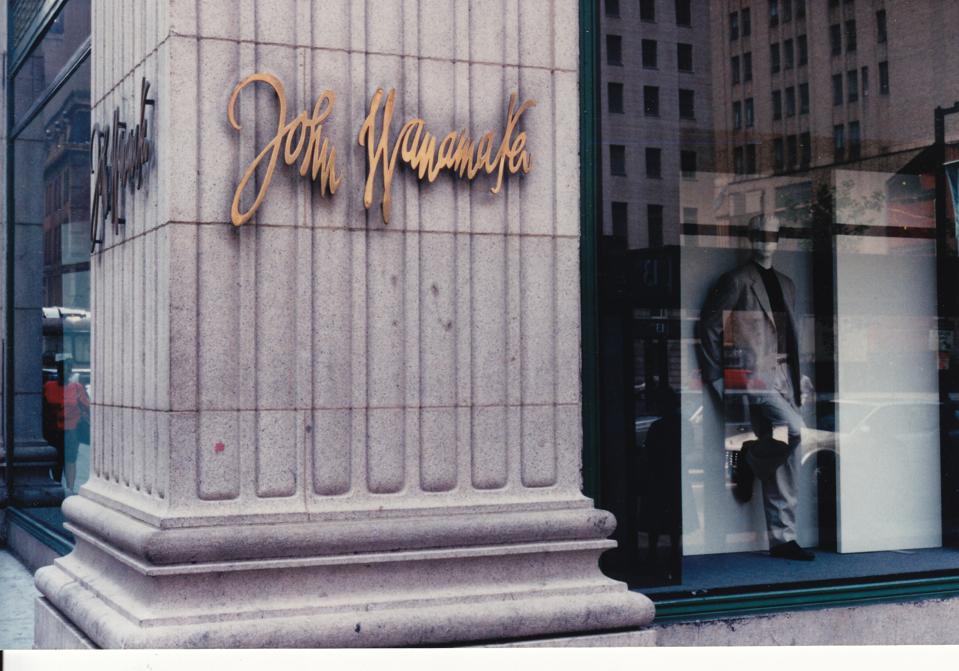 Ray Biswanger, Executive Director of the Friends support group, doubts that there has been any damage to the instrument during the store’s closure. “Sometimes when you first start playing, the silver contacts are tarnished but sparks fix that,” says Biswanger.

The Wanamaker Organ made its first appearance at the 1904 St. Louis World’s Fair. Cost overruns from the instrument’s massive size forced the demise of its builder, the Los Angeles Art Organ Company. After the exhibition, the organ sat in storage but eventually caught Wanamaker’s attention. John Wanamaker wanted to fill his Grand Court with music and in 1909 thirteen railroad cars brought the organ to Philadelphia.

Wanamaker was never fully satisfied with the instrument’s sound. As he craved more volume, the Organ Shop staff continually added to the organ. Between 1911 and 1930, the organ grew from 10,000 to over 28,000 pipes. “[The Organ] has the tonal resources of three symphony orchestras,” states Biswanger. 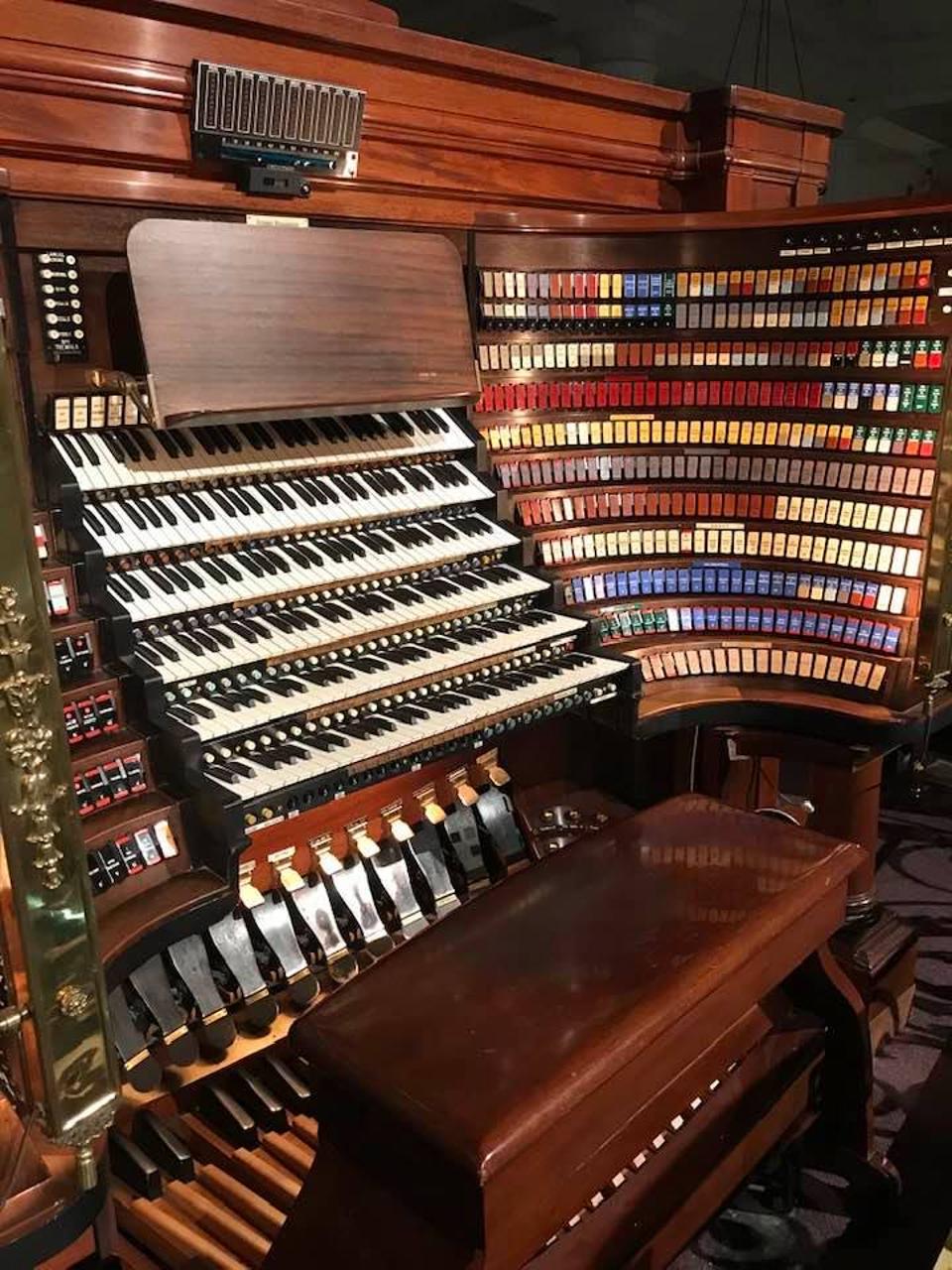 The Wanamaker Organ console, with its six keyboards or manuals, is shown on March 24, 2020. The … [+] Center City Philadelphia Macy’s, home to the organ and the Grand Court, was closed due to COVID-19 on March 17.

Despite this year’s festival cancellation, Biswanger hopes that a smaller event can occur later in 2020. “I just want the daily organ concerts to start up quietly so they are not singled out as an attractive safety hazard,” says Biswanger.

Philadelphia has been severely impacted by COVID-19. However, Governor Wolf has stated that quarantine restrictions in the Philadelphia area will be relaxed on June 5. This will help lead the way to Macy’s reopening, although no particular date has been openly discussed. As one of Philadelphia’s most popular meeting places, the Grand Court will likely have new provisions that address social distancing needs. The space invites crowds. But once the store and its organ return, a bit of everyday life in Philadelphia will be restored.