Breaking
FIFA 21 Next-Gen Details Revealed For PS5 And...
Being Right At Being Wrong
Biden’s Stock Market Is Off To A Faster...
How To Avoid Social Media Misinformation Ahead Of...
The True Cost Of Losing An RFP
When Cause And Effect Converged With Humanity
Exxon Mobil Breaks Above 200-Day Moving Average –...
This Small Business Is Looking To Make America’s...
6 Questions To Practice Gratitude This Thanksgiving
Report: Facebook Tweaked News Feed After Election Day...
End The Month Strong With These Top Value...
From Maths Failure To Global Educator: How Knowledgehook...
What Will Customer Service Look Like In The...
‘Call Of Duty: Modern Warfare’ And ‘Warzone’ Season...
3 Lessons Startups Can Learn From Quibi’s Failure
You Aren’t An Imposter, No Matter What Your...
Home Business Top Of The World: Liverpool Wins Club World Cup Against Classy Flamengo
Business 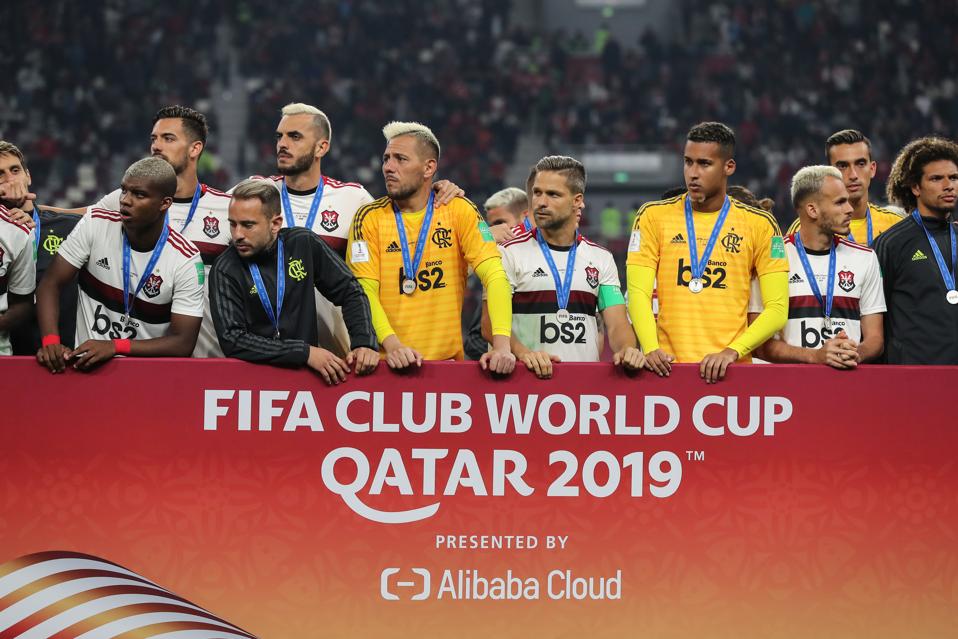 In the end, it was heartbreak for Flamengo in the final it had so longed and craved for against the opponent of its dreams. On Saturday, in Doha’s glitz of glass skyscrapers and rising World Cup venues, European champion Liverpool triumphed with an overtime strike from attacker Roberto Firmino after slick transitioning through Jordan Henderson and Sadio Mane in a move that summed up Liverpool’s attacking prowess.

At times, Liverpool ran circles around Flamengo. At other times, Flamengo ran circles around Liverpool in a marvelous box-to-box game that delivered on its promise of a fascinating intercontinental encounter. It was arguably the best Club World Cup final in recent memory, but there was to be no reenactment of Flamengo’s greatest moment in history in 1981 when the Rio giant and Zico breezed past the English club 3-0 in the Intercontinental Cup.

In the first five minutes Liverpool had three chances in quick succession. The European champion identified the opposing defense’s high line as a weakness, but Firmino, after 30 seconds, as well as midfielder Naby Keita failed to exploit the space and freedom they were both given.

Against River Plate and Al-Hilal, Flamengo struggled to ignite in the first half, but on Saturday it encountered a team with a set of characteristics that the Brazilian team would struggle against: a high press, a lot of mobility, and quick transitions, all executed at frightening speed and buttressed by the towering physicality of Virgil Van Dijk and Sadio Mane. The Rio club is not accustomed to play elite football at Liverpool’s searing pace.

Flamengo’s philosophy differs from other Brazilian clubs, which tend to sit deep and protect narrow leads. It doesn’t defend in numbers, but prefers to dictate the play, fielding a high line. That is where the danger would always lurk against Liverpool. Jesus tweaked his team to stifle Liverpool’s whirlwind onslaught early on: Bruno Henrique played out wide on the left and stymied Trent Alexander-Arnold from storming forward. Gabigol kept Liverpool’s own high line in check.

The Brazilian club recovered, posing questions of Liverpool and pinning the English team back in its own half. Flamengo played on its own terms: European-styled possession soccer. The Rio club is the best team to come out of South America, not merely for winning the Brazilian league with a record haul of 90 points and the Copa Libertadores final in a stirring epic for the ages, but, more importantly, for the manner and ethos with which they swept past opponents. The team’ s unbound proactive soccer is a rarity in the conservative environment of the Brazilian game.

But there was always a danger that Flamengo would fall short against the European champion, whose economic resources far surpass the record 200 million euros revenue Flamengo generated in 2019. The Rio giant has struggled in the few games that it played against non-Brazilian opposition. As the first half progressed, Flamengo topped 60% of possession and Henrique proved to be a terrifying scourge for Alexander-Arnold.

Rodrigo Caio, Everton Ribeiro and Jorge Jesus had all said that Flamengo’s style would not change against Liverpool. It was a bold statement in the given circumstances: Jesus has been Flamengo coach for just six months and the team played 74 games in the calendar year, an astonishing number and a reflection of the grueling nature of Brazil’s domestic league.

Indeed, after the 70th minute, Flamengo fatigued and the introduction of Vitinho for Giorgian de Arrascaeta backfired. The nifty winger contributed little to Flamengo’s game. The influence of Diego, veteran statesman and match winner against both River Plate and Al-Hilal, remained limited as well. Everton Ribeiro and De Arrascaeta had been outlets for Flamengo and Liverpool took command of the midfield.

In a bizarre decision Qatari referee Abdulrahman Al-Jassim overturned his decision to award Liverpool an injury-time penalty, but the end, with Flamengo physically on its knees, was inevitable. Liverpool’s 99th-minute winning goal extinguished Flamengo’s dream of the world crown, but ultimately that was perhaps of secondary importance.

Flamengo and Jesus have restored the club’s DNA from the 80’s. The board, the players and the fans have all bought into Portuguese coach’s idea of modern, compact soccer. That, more than anything else, is Flamengo’s biggest victory yet. Even against the best club in the world, it imposed its own philosophy and thrived.

Miami Stays Dominant When They Should To Maintain Success