Breaking
How To Get Your Startup Business Off The...
How To Create A COVID Safe Construction Site
How to Make a Good First Impression at...
Volkswagen’s Truck Unit Ties Up With TuSimple On...
3 Lucrative Hidden Benefits Of Podcasting
U.S. Tax Court Affirms Most Penalties In Patel...
Your Stargazing Guide To Fall: One ‘Halloween Blue...
Mnuchin: White House Still Supports Direct Payments For...
How To Retain Your First Startup Product Users
China Shipments To The U.S. Are 7 Times...
Reviewing ‘The iPhone Of Air Conditioners’
The 8 Best CRO Companies of 2020
AARP BrandVoice: The Doctor Will See You Now,...
ThoughtSpot’s New Cloud-Based Tool Aims At Boosting Growth...
10 Ways Service-Based Businesses Can Generate Positive Word-Of-Mouth...
A Customer-Centric Culture Starts By Embracing This One...
Report: Struggling Black-Owned Businesses Need More Government Grants
Microsoft Races Ahead On RPA (Robotic Process Automation)
Why The Fed’s Outlook Paints A Sobering Picture...
Home Technology Tradeoff Between Public Health Measures Targeting Covid-19 And Restarting The Economy Is A False Dichotomy
Technology 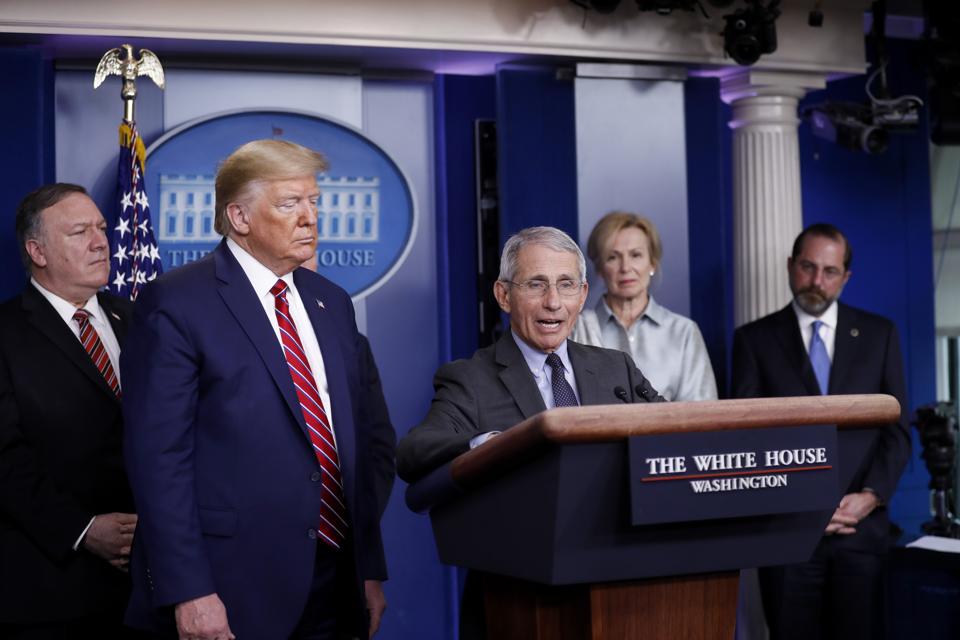 Anthony Fauci, director of the National Institute of Allergy and Infectious Diseases, center, speaks … [+] as President Donald Trump, second left, listens during a Coronavirus Task Force news conference in the briefing room of the White House in Washington, D.C., U.S., on Friday, March 20, 2020. Americans will have to practice social distancing for at least several more weeks to mitigate U.S. cases of Covid-19, Anthony S. Fauci of the National Institutes of Health said today. Photographer: Al Drago/Bloomberg

Even as the daily numbers of new Covid-19 infections and deaths in the U.S. jumped again yesterday to new highs of 13,355 and 247, respectively, some are itching to “get back to work” and urge a quick reopening of the nation for business.

Referencing the need to for America’s economy to be up and running again, President Trump took to Twitter on Monday: “We cannot let the cure be worse than the problem itself. At the end of the 15-day period, we will make a decision as to which way we want to go.” And, a day later he followed up by saying the country will be “raring to go” by Easter with people “packed in churches.”

And, it’s not just Trump and other American officials who are eager to restart. Several European government officials have expressed concern that lockdowns cannot go on too long or the “consequences of economic meltdown could be even more deadly than the disease.”

Business leaders, like Lloyd Blankfein, former chairman of Goldman Sachs, have also weighed in: “Extreme measures to flatten the virus curve are sensible for a time to stretch out the strain on health infrastructure. But crushing the economy, jobs and morale is also a health issue-and beyond.”

One can question whether there’s even been a systematic, nationwide shutdown in the U.S. The degree to which most social distancing measures have been implemented has varied enormously and been determined at the local level, by states and counties. But, the point some, including the president, are making is that it’s almost time to relax restrictions.

Undoubtedly, the U.S. economy is experiencing a substantial exogenous shock, which is severely curtailing economic activity and temporarily putting many out of work. This morning’s record numbers of jobless claims point to the carnage wrought by the Covid-19 black swan. And so, a natural impulse is to revert to normalcy as soon as possible.

However, what the pronouncements above appear to imply is a tradeoff between public health and the economy, rather than an interdependency.

Globally, the challenge is invariably finding a balance between three objectives. First, the need to effectively combat the coronavirus. Second, provision of substantial financial support to the millions of displaced workers, as well as small and large businesses. Third, restart the economy.

With respect to public health measures targeting Covid-19 and restarting the economy it’s not one or the other. The two need to work in tandem, with a sustained economic recovery predicated on a sensible public health approach to tackling the virus. A premature return to business as usual normal could reignite infections and expand Covid-19 hotspots to where there are none currently, which could inflict more severe, longer-term damage to the economy. Resolving an unfolding coronavirus public health crisis and ensuring sustained economic recovery may require maintenance of strict social distancing measures and restrictions on economic activity for at least three to four more weeks. This would allow for time to roll out a more expansive testing program while equipping medical personnel with proper protective equipment.

Let’s suppose the economy is restarted too soon, fueling another, even more widespread outbreak, meaning expansion from current epicenters to places that at present have relatively few confirmed cases of coronavirus. In turn, this could very well force another lockdown, a much stricter one, and produce more uncertainty in the economy, among businesses as well as investors. A stop-start-stop policy may be more detrimental to the economy than maintaining a systematic pause for a defined period of time that public health officials agree to, followed by a carefully thought out transitional phase in which state and federal public health authorities coordinate their actions with respect to loosening social distancing measures.

Public health experts Aaron Carroll and Ashish Jha acknowledge that the temporary economic burdens of a lockdown are huge. But, the costs of a haphazard, stop-start-stop policy may be larger. Public health and the economy are mutually interdependent. Getting back on track with an uninterrupted economic restoration is contingent on having won the battle against the virus. The nation hasn’t done that yet.

3 Easy Ways To Earn More Rewards On Takeout And Delivery