In 2018, I reviewed a Timberline 850 Wood Pellet Grill from Traeger. Why would a guy with a focus on consumer technology be reviewing a grill? Because Traeger went all-in on technology. And I like grilling and barbecue… The Timberline 850 turned out to be a revolutionary grilling experience. It checked all the boxes, with that wonderful wood fire smell and flavor, the ability to cook at temperatures ranging from low and slow up to 500-degrees, and a whopping 850 square inches of capacity. It was built like a tank. But the high tech angle was Traeger’s then-new WiFIRE controller. With Wi-Fi connectivity, everything could be monitored and controlled with a smartphone app. Everything except fuel levels. But Traeger now offers a pellet sensor, so even fuel levels can be checked remotely.

The Traeger Pellet Sensor sells for $79.99 and can be retrofitted to the company’s Pro 575 & 780, and Ironwood 650 & 885 grills. It’s also now included as a standard feature with new Ironwood and Timberline series grills. And the addition of the pellet sensor makes what was already the best wood-fired grilling experience I’ve ever had, even better.

To test the Traeger Pellet Sensor, I added one to a Traeger Pro 575 grill. It was a two minute process, with a big payoff. 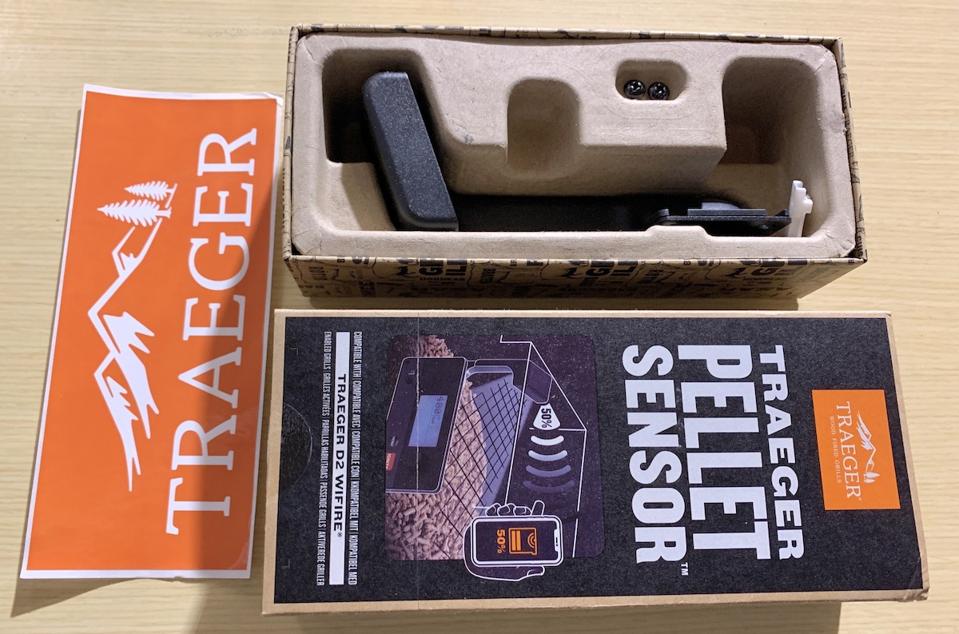 The Traeger pellet sensor looks something like an upright LED garden light fixture. Installation was a breeze. On the Pro 575 grill, this involved pulling out the pellet hopper safety grate, then removing a plug and two screws on the wall of the hopper. The plug covers a connector mounted to a short wire. That plugs into a mate attached to a wire near the bottom of the pellet sensor. At this point, you line up two pre-drilled holes on the pellet sensor to the spot where the two screws were removed, then replace the screws. The pellet sensor is now firmly in place. Then the hopper safety grate is set back in place. It shouldn’t take more than a few minutes and the only tool required is a Phillips screwdriver.

When I powered up the grill, the pellet sensor automatically integrated itself with WiFIRE — there was no manual connection required. 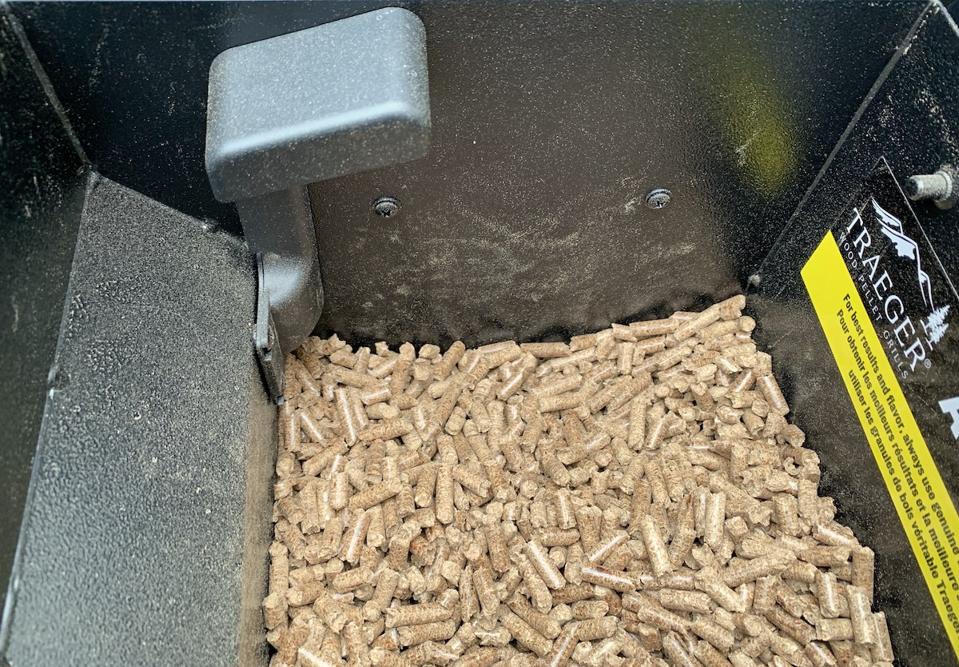 There is a process on the grill’s control panel to calibrate the sensor to ensure accuracy. The control panel walks you through step-by-step, but it basically involves pushing a button to indicate when the hopper is empty, then covering the pellet sensor with your hand and pushing the button a second time. That’s it — sensor calibrated.

The functionality of the Traeger Pellet Sensor is pretty straightforward: it tracks how full the pellet hopper is. You can see it on an indicator on the grill’s control panel. That’s handy, but the real magic is the integration with Traeger’s WiFIRE feature. That means you’ll be able to check the pellet levels and even receive a notification if the pellets are running low, on your smartphone. No matter where you are. 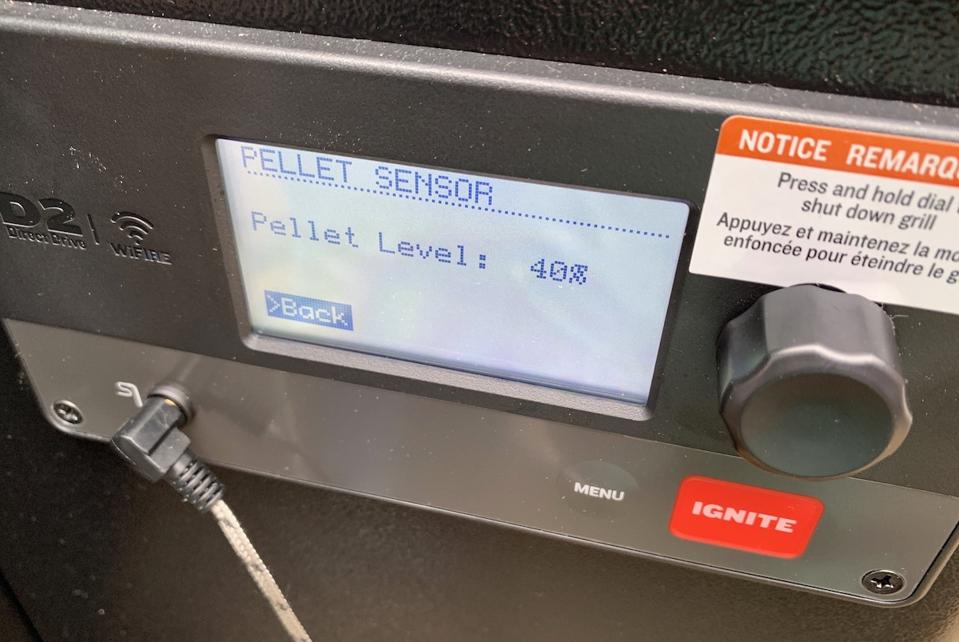 Traeger pellet sensor shows the hopper fill level on the grill display as well as on the mobile app.

When I reviewed that Traeger Timberline 850 grill, WiFIRE truly was a killer feature. Wi-Fi connectivity on a grill sounds a bit like technology run amok, but it makes a huge difference. I was accustomed to running out to the back yard and checking my grill every 30 minutes or so, for hours at a time when smoking meat. Sometimes I would have to stand there for 20 minutes and babysit the grill, adjusting the temperature to make sure nothing burned, or that the fire didn’t go too low. That’s fine in nice weather — a great excuse to crack a beer and enjoy the outdoors — but not so fun in rain, or in the winter. And it meant not being able to leave the house.

With Traeger’s WiFire feature, the app on my smartphone put me in complete control. I could monitor the temperature of the meat and the grill. I could adjust the temperature, set alerts, and on the Timberline 850 there was even a “Super Smoke” button feature. In testing, I left the house for hours at a time, monitoring and adjusting the grilling while walking the dogs or grocery shopping. There are even automated recipes in the app that take the manual guesswork out of cooking popular dishes.

Worry about running out of pellets may not have been a huge concern — after all, the hopper on a Traeger grill holds a lot. But if you are running an errand and can’t remember if you filled it up before leaving, or you’re concerned that a high cooking temperature may be burning through pellets faster than expected, having the pellet levels available as a live stat on the Traeger app eliminates second guessing and any fuel level anxiety.

A Word About The Traeger Pro 575

This review is primarily about Traeger’s new pellet sensor. However, it’s worth saying a few words about the Traeger Pro 575 grill used to test it.

At $799.99, the Pro 575 is the most affordable of the company’s connected grills. It has WiFIRE, but you do need to buy the pellet sensor separately. It may be at the entry level of Traeger’s 2019 series, but this is still very much a premium wood pellet grill. The build is solid and the assembly straightforward. I appreciated the humor in the assembly instructions — which indicated not only the specific hardware and bits required for each step, but the recommended beer consumption. 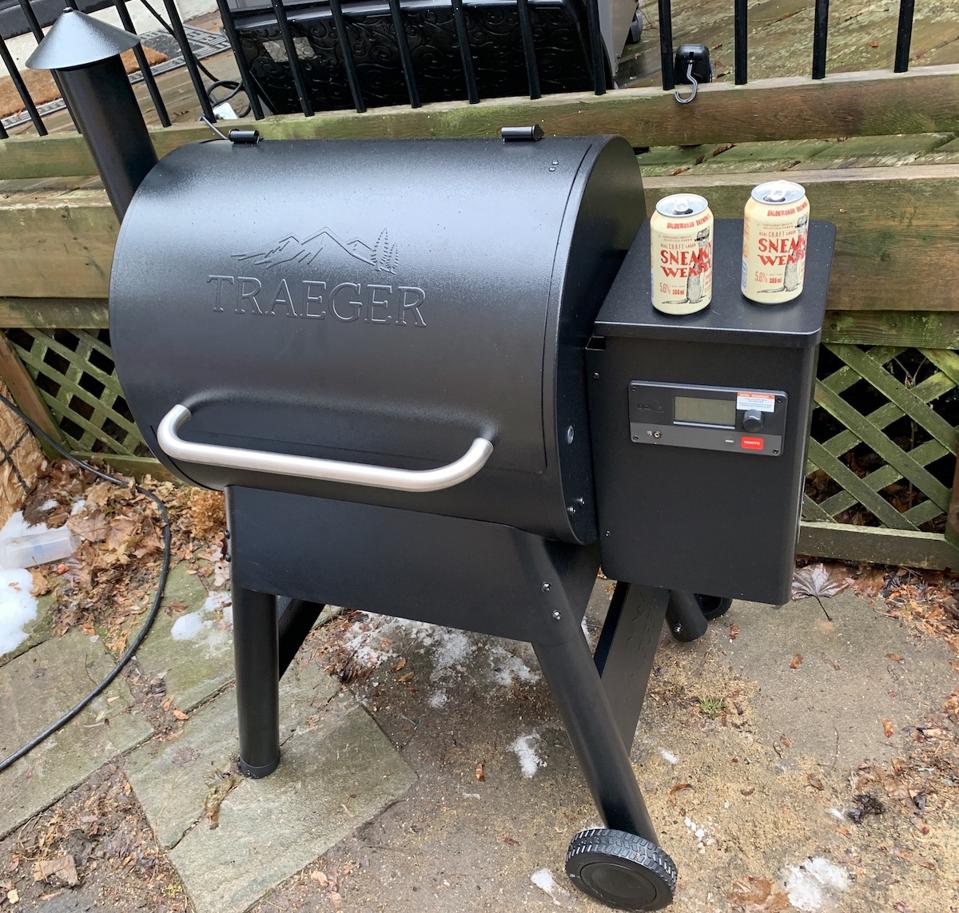 The Traeger Pro 575 grill assembled and ready to start grilling.

We ran into a slight hiccup connecting the grill to Wi-Fi, but that turned out to be an issue with the local ISP’s outdoor equipment. A service call discovered a damaged and water-logged component that was causing internet service to the house to drop out repeatedly. Once that was fixed, all was well and everything was up on the Traeger app — grill temperature, meat temperature, and pellet levels. That mean dinner could cook while we went to a local pub for a few pints, safe in the knowledge we could watch all the vitals from our table, adjust the temperature if needed, and even time time our arrival for when the roast was done. 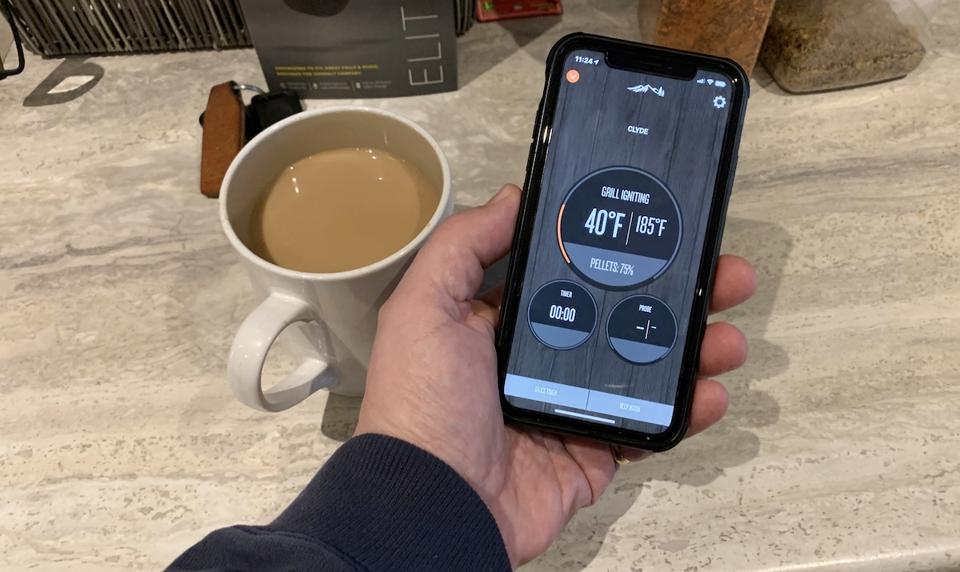 As the grill begins to warm up, you can see on the Traeger app that the pellet level is at 75%.

It’s worth mentioning as part of this experience, that Wi-Fi connectivity is not required for this grill to function. Wi-Fi gets you the remote access and control, but the grill remains fully operational without it.

The Traeger Pro 575 is about 41-inches wide, it has two grills with a total cooking surface area of 572 square inches (enough for 24 burgers), and a maximum temperature of 450-degrees. While it lacked the “Super Smoke” button of the Timberline 850, it still delivered wonderfully smokey flavor. During testing, it ran through pellets faster than usual, but it was set up outdoors in the Canadian winter and had to fight the freezing temperatures to keep that grill hot. Note: If you regularly grill in freezing temperatures, Traeger sells insulated blankets for some models. 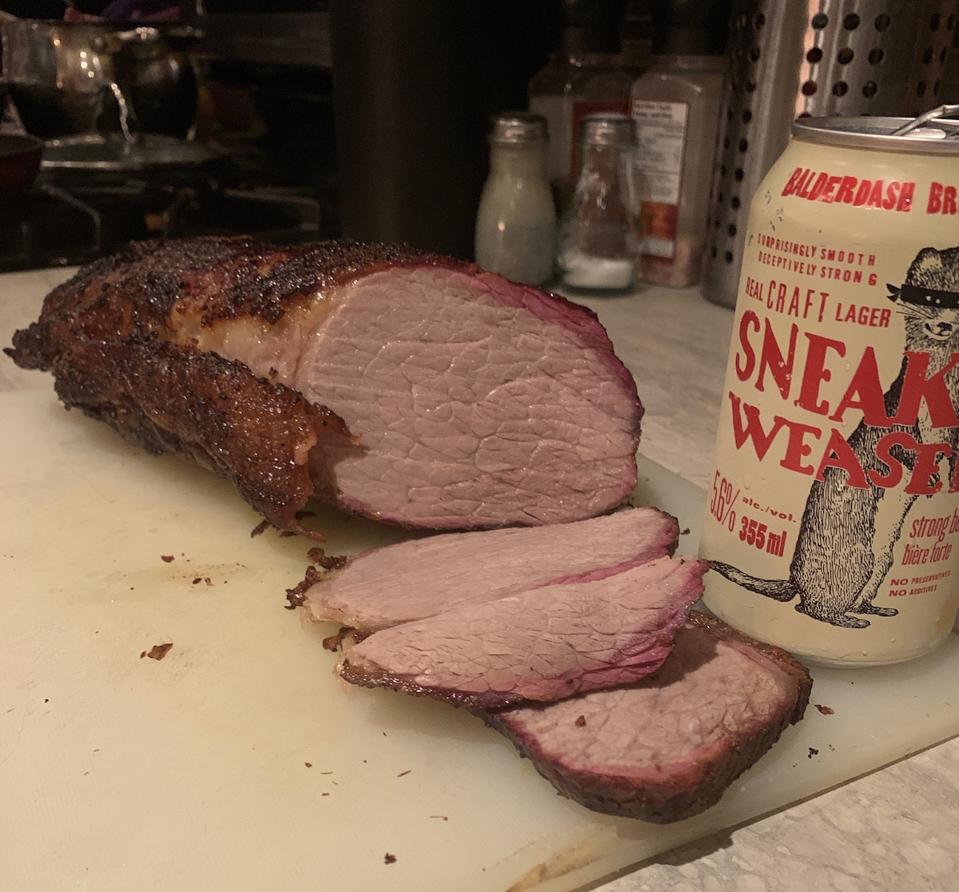 The roast cooked on the Traeger Pro 575

If you want to experience a Traeger connected grill, this is the most affordable, and most compact, way to get in on the action.

If you currently own a Traeger Timberline series grill, unfortunately the pellet sensor isn’t compatible. Buy, hey, you still have a fantastic wood-pellet grill with complete remote-control of cooking functions.

If you own a Traeger Pro 575/780, or Ironwood 650/885 grill, the $79.99 for the Traeger Pellet Sensor is money well spent. Two minutes of installation and you can say goodbye to fuel anxiety. And if you’re in the market for a new Ironwood or Timberline series grill, you have another reason to go with Traeger. With an included pellet sensor, these high-tech, Wi-Fi connected wood pellet grills just got even better…

Disclosure: Traeger provided a grill and pellet sensor for evaluation but had no input into this review.

How I Would Spend Jeff Bezos’ $10 Billion For Climate Change