Transparency International Fails On Solutions: If You Want To Defeat Corruption, Push For Economic Freedom

Although I was born and raised in a country where corruption, especially petty corruption, had become part of many aspects of life, I only began studying the issue more thoroughly when corruption measurements were published. The first of these was that of Transparency International, which released the Corruption Perceptions Index (CPI) in 1995. The annual index continues to be expanded and improved, and the 2019 ranking was released last week. It covers 180 countries and territories around the world.

The launching of the first indices of corruption coincided with another first, the release of measurements of economic freedom. The Fraser Institute in Canada was the first to begin to study how to measure economic liberties. Soon after, the Heritage Foundation began to produce a competing index. Thanks in part to this healthy competition among think-tanks, both indices have improved in rigor and user-friendliness, and have led to the elaboration of other indices and countless studies. In 1997, Eugenio Guzmán, then a recent graduate of the London School of Economics and today the dean of the school of government at the Universidad del Desarrollo in Chile, and I conducted the first study correlating economic freedom with corruption data from Transparency International.

The study, which shows that there is a strong and significant correlation between higher economic-freedom scores and lower corruption scores, was preceded by an analysis of the theories and studies of corruption which had been conducted until then. Since that first effort in 1997, I have conducted studies and correlated the data on a regular basis, and the basic conclusion and insights remain the same: Economic freedom is a major deterrent to corruption.

The 2019 Corruption Perceptions Index and the 2019 Heritage Index of Economic Freedom are no exception. As the chart shows, more economically free countries are also less corrupt. The opposite also holds: countries with the most corrupt leaders and institutions show dismal scores in respect for economic freedom. 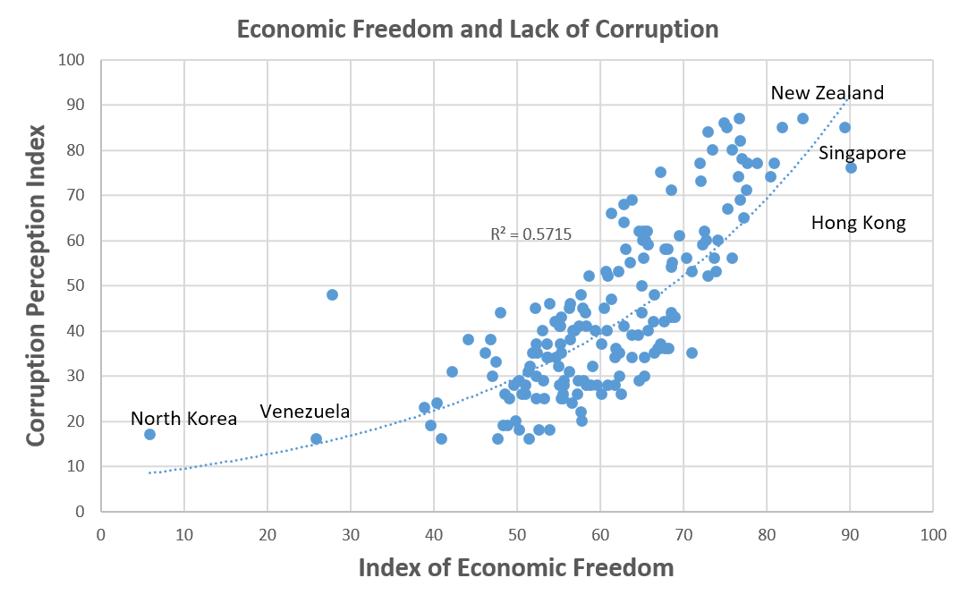 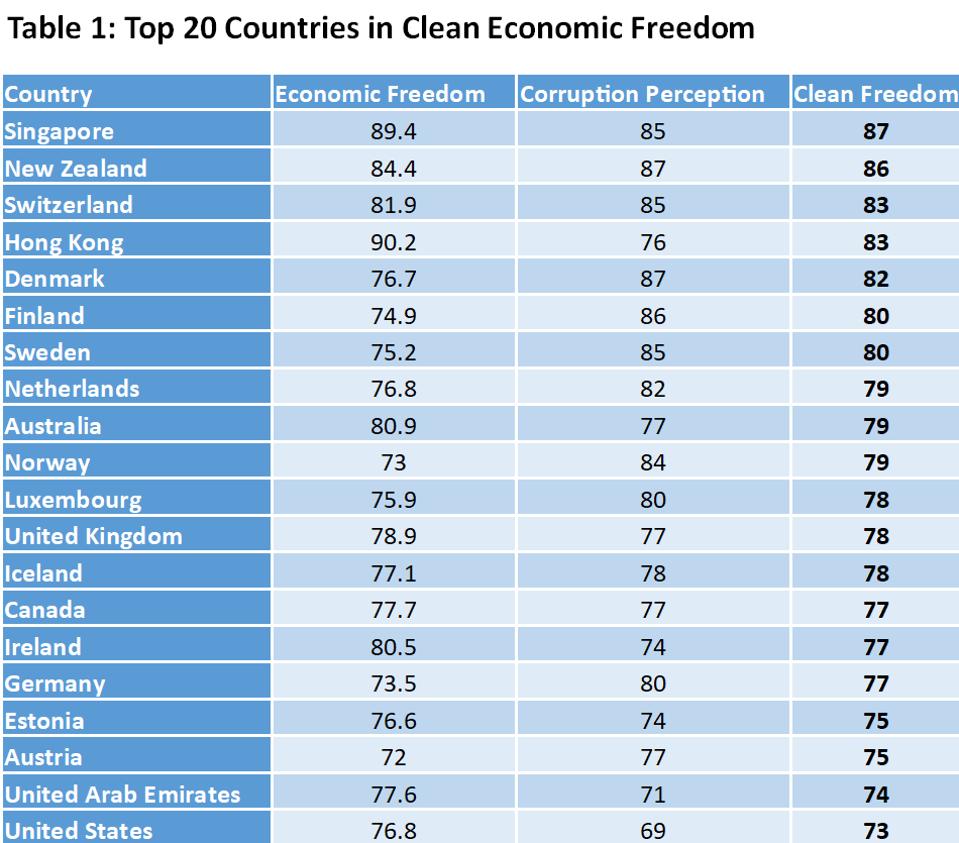 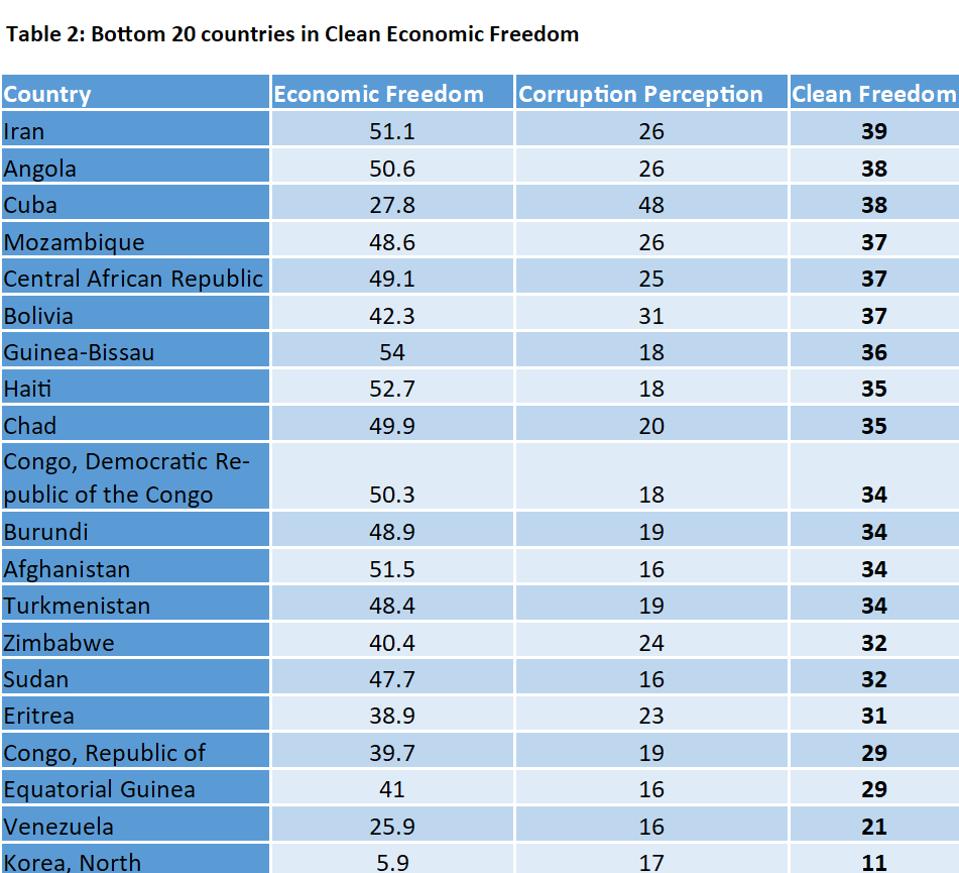 Focus on companies that pay bribes; another black eye for Sweden

As we say in Argentina, my native country, it takes two to tango. When speaking of corruption, those of us in the free-market camp point fingers at government officials and cronies who receive bribes. Those on the other side of the political equation, who favor more statist policies, point to the private-sector companies who pay the bribes.

Several years ago, Swedish construction company Skanska was involved in a major corruption scandal in Argentina. Then-congressman and current Senator Esteban Bullrich denounced the company, which acknowledged paying bribes to win contracts for infrastructure projects from the state gas company, Energas. Skanska sacked all its Argentine managers and paid back the several million dollars it had saved in taxes due to the bribes. There were other companies, 16 in total, involved in the corruption scheme, but to my knowledge only Skanska returned the money.

In the 2019 CPI, Transparency International presents the case of another Swedish company, telecommunications giant Ericsson. According to the report, Ericsson “agreed to pay over US $1 billion to settle a foreign bribery case over its 16-year cash-for-contracts campaign in China (41), Djibouti (30), Kuwait (40), Indonesia (40) and Vietnam (37). This is the second largest fine paid to US authorities.” (The numbers in parentheses show the respective countries’ CPI scores.)

The pervasive problem of cronyism or quasi-corruption

Analyzing the problem of corruption gets more complicated when we incorporate the phenomenon of quasi-corruption: cronyism. Given some of the efforts to combat corruption through stricter regulations and enforcement – especially the United States’ Foreign Corrupt Practices Act, which can impact all companies who do business in the United States – the buying and selling of privileges has become more sophisticated. They can be disguised in many ways and are usually justified by authorities in the name of urgent need.

A powerful businessman, for example, can promise to speak well of the president of his country and “coincidentally” receive a lucrative no-bid contract. Newspapers and media outlets receive abundant government-paid advertising and “coincidentally” become advocates for government policies. Relatives of senior government officials can get lucrative speaking fees, large donations to foundations they control, and even senior positions in private companies. A new book by Peter Schweizer, Profiles in Corruption, focuses on the exchange of favors by leading “progressives” of the Democratic Party, from Senator Elizabeth Warren to former Vice President Joe Biden. None of the six politicians covered in the book has been formally condemned for corrupt activities, so the book could have been called Profiles in Cronyism. In the book one sees countless subterfuges used to disguise corrupt activities. In Extortion, a 2013 work that I have mentioned in a previous column, Schweizer also pointed at some leading Republicans of that time. He has been a balanced and courageous investigative writer.

Unfortunately, there are very few academic articles about cronyism. For example, the various editions of the Concise Encyclopedia of Economics, a 600-page volume published by Liberty Fund with the collaboration of many of today’s most prominent economists, devote several pages to corruption. But there is no entry for cronyism.

The example of U.S. corruption in the Concise Encyclopedia describes how former President Lyndon B. Johnson earned half of his fortune. His wife purchased the license for a radio station in Austin, Texas, at “a very low price and then applied for permission to operate the radio station twenty-four hours a day and on a much better part of the AM band. The Federal Communications Commission granted her permission within one month. In return, Johnson helped save the FCC from budget cuts. Here is a case of corruption that was probably completely legal. The key to corruption is the combination of power and discretion in the hands of government officials.” In a very good article about inequality in Reason magazine, the author of the encyclopedia entry, Dr. David Henderson, describes the Johnson case in great detail. However, the scheme looks more like the quasi-corruption described in Profiles in Corruption than corruption that can be legally prosecuted.

Although I have always praised Transparency International’s efforts to measure corruption, the analyses that accompany its index could be much better, especially in their recommendations. They completely ignore economic factors. They focus on campaign finance regulations and similar measures, saying that countries that enforce them will have an average transparency score of 70. But economic freedom is a better indicator: countries which score as “economically free” in Heritage’s Index of Economic Freedom, for example, get an 80.7 transparency score on average. If we include countries classified as “mostly free,” the average transparency score is still 70.5. Transparency International’s apparent blindness to the benefits of economic freedom is apparent in a massive study (more than 600 pages long) that the organization conducted in Brazil in conjunction with the Getulio Vargas Foundation. This study also failed to mention economic freedom as a factor or a solution. At the same time that polls show President Jair Bolsonaro’s approval ratings improving, in part for his fight against corruption, Transparency International’s new CPI offers a snide remark about President Bolsonaro as a threat to anticorruption efforts. On the contrary, I expect that once Brazilian economic liberalization laws are implemented, Brazil’s transparency score will show great improvement.

Based on the study results over the last 25 years, I feel confident concluding that leaders who fight corruption with more regulations rather than with true economic freedom are comparable to those who want to fight fires with gasoline: purposefully ignorant or willful accomplices. Transparency International should know better.

Why Trump’s War On European Wine Is Bad...

Cody Bellinger Could Be Baseball’s Next Record-Breaking Extension

‘Scoob,’ ‘Antebellum’ And ‘Greyhound’ All Get New Trailers

The Power Of Honesty In Growing Tech Startups...