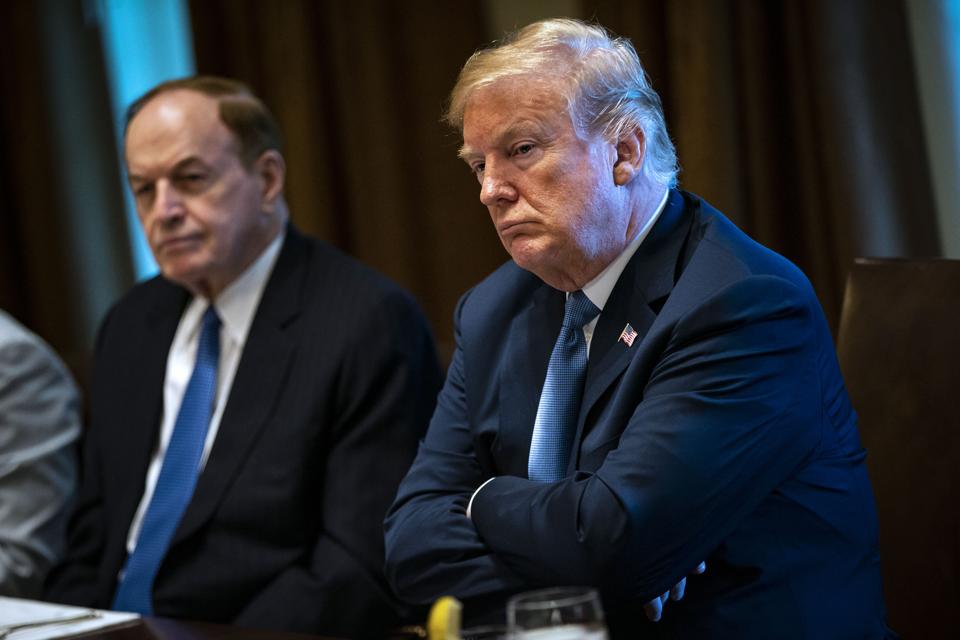 Donald Trump attends a lunch meeting in the Cabinet Room at the White House on June 26, 2018, and … [+] called the Supreme Court’s 5-4 ruling in favor of the administration’s travel ban a “tremendous victory.” (Photo by Al Drago-Pool/Getty Images)

Immigration travel bans are directed against people, particularly American citizens, not against foreign countries. Just like tariffs are taxes on Americans who want to buy foreign-made products, “travel bans” are against U.S. citizens who want to live in America with foreign-born individuals they care about, such as a spouse or child. This distinction takes on renewed importance as the Trump administration expands the policy it instituted by proclamation in 2017 that prohibits, with limited waivers, nationals of five majority-Muslim countries from visiting or immigrating to the United States.

“The Trump administration is planning to add seven countries – Belarus, Eritrea, Kyrgyzstan, Myanmar, Nigeria, Sudan and Tanzania – to its travel ban list, U.S. media reports said on Tuesday,” according to Reuters. “Some countries will face bans only on some visa categories, the Wall Street Journal reported. The list of countries was not final and could yet change, website Politico said.”

Calling something by its correct name is vital, particularly with government policies that affect the lives of many people. George Mason University economics professor Donald J. Boudreaux made this point in a recent letter to the Wall Street Journal. “May I suggest that you change your policy to always refer to tariffs as being imposed on people rather than on goods and services,” wrote Boudreaux. “Automobiles, sugar, and other imports – being inanimate – pay nothing. Tariffs are paid only by people, and especially by citizens of the government that imposes them.”

The phrase “actual victims” is even more appropriate in immigration policy. The Trump administration’s policies did not inflict emotional pain on the entities known as “Iran” or “Yemen” when it barred nationals of Iran and Yemen from joining their spouses in the United States.

“One of my clients affected by the travel ban is an American technology researcher with several innovations to his credit,” said William Stock, a founding member of Klasko Immigration Law Partners, in an interview. “He has been working with his employer to be transferred to the firm’s Canadian office because his wife, an Iranian healthcare provider, was denied the green card he sponsored her for because of the travel ban. America is losing two highly successful people – one an American – because of this policy.”

Stock notes the personal toll on the couple. “They have had to put her career on hold, spend thousands of dollars traveling to third countries where they can be together, and pay for her immigration to Canada to keep their marriage together for the three years since the travel ban was announced.”

The Washington Post’s Jason Rezaian produced a poignant short film about American citizens separated from their Iranian-born spouses because of the travel ban. Rezaian was unlawfully imprisoned by the Iranian government for more than a year and understands the people harmed by the travel ban are Americans and average Iranians, not the leaders of Iran’s government or “Iran” more generally.

The administration’s travel ban caused the number of Immediate Relatives of U.S. Citizens – the spouses, children and parents of Americans – who received permanent residence in America from the five majority-Muslim countries (Yemen, Iran, Libya, Somalia and Syria) to decline by 69% between FY 2016 and FY 2018, according to a National Foundation for American Policy analysis. (See Table 1.) In all, 10,544 fewer spouses, children and parents of U.S. citizens from these five countries were admitted to America in FY 2018, after the ban went into effect, compared to FY 2016.

The story is similar for Americans wishing to sponsor an adult child or sibling, or a lawful permanent resident sponsoring a spouse, child or unmarried adult child, from the five countries. Between FY 2016 and FY 2018, immigrants in family-sponsored preference categories decreased by 3,703, or 91%, from Yemen, by 72% from Iran, by 35% from Libya, by 37% from Somalia, and by 62% from Syria. (See Table 2.)

Everyone in America wants the country to be safe. However, objectively, the administration has not presented evidence that preventing American citizens from living with a spouse, child or other close relative improves safety in America. Given the limited legal justification required, the administration will expand the ban soon and may do so again. When it does, we should remember that travel bans are used against people, including Americans, not countries.

Corruption Is Easing In Some Unlikely Corners Of The Middle East, Says Report On Global Graft