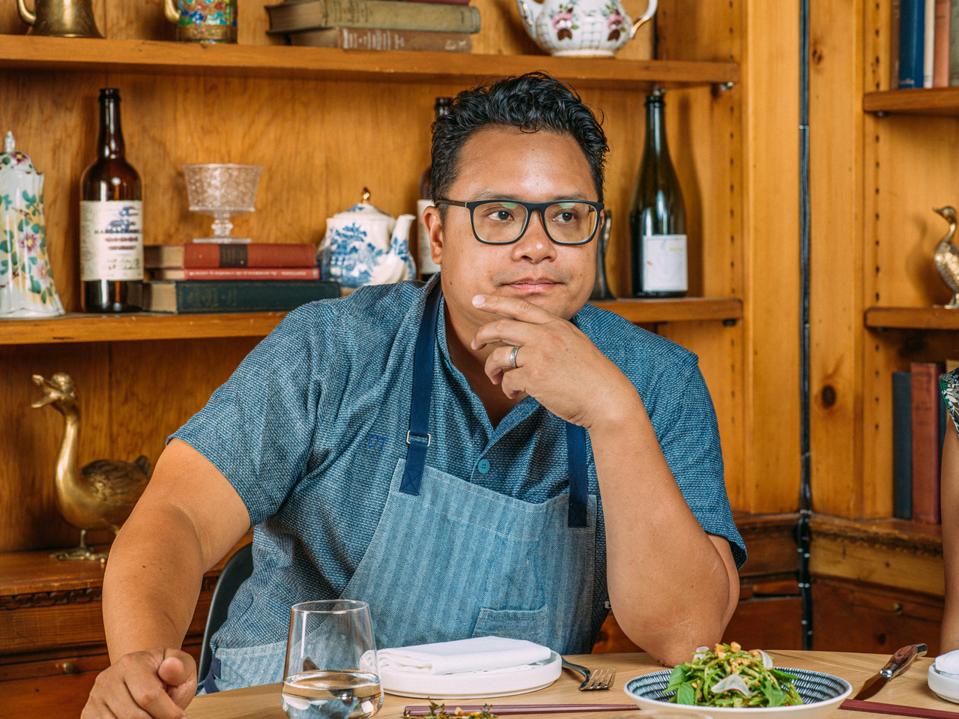 Celebrity Chef Dale Talde, a native of Chicago, first learned to cook beside his mother, a first-generation Filipino-American. His creative cuisine reflects the unique blend of his upbringing and experiences straddling both American and Asian cultures.

After formal training at the Culinary Institute of America, Chef Talde went on to open (and close) a string of business ventures he operated with partners: These included three popular namesake restaurants, TALDE, in Park Slope, Brooklyn; Miami, Florida and Jersey City, New Jersey. (Before its closure seven years after opening, Zagat ranked the Park Slope eatery second on its list of the best new restaurants in New York City.) He also opened two restaurants in Manhattan, Massoni at the Arlo NoMad Hotel and Rice & Gold at Hotel 50 Bowery.

Yet, the chef is probably best known for his many appearances on food reality television. He was a three-time contestant and fan favorite on Bravo’s Top Chef, and also competed and served as a judge on Chopped, Iron Chef America, Knife Flight and Beat Bobby Flay.

Located in a storied Georgian-style mansion on the grounds of the Tarrytown House Estate on the Hudson, the Westchester County restaurant is about 30 miles north of New York City. Since its opening, it has drawn a steady flow of food-enthusiasts from north, south and across the Hudson River. The whimsical decor of the dining rooms and the restaurant’s innovative menu reflect not only the Chef’s background but also his energetic and playful persona. 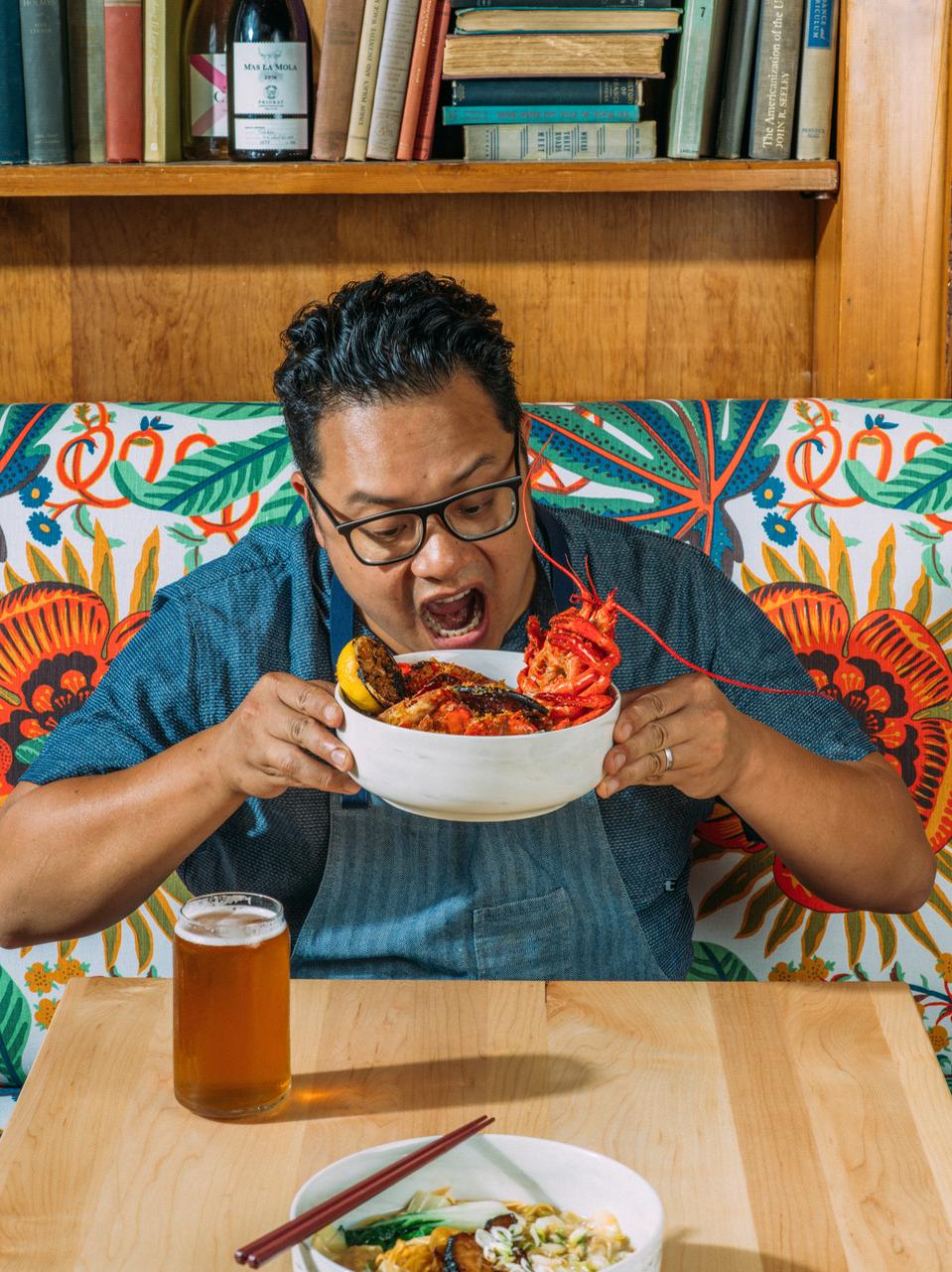 Forbes.com spoke with Chef Talde to find out how his experiences and travels have inspired his cooking:

How has your ethnic background and upbringing influenced your cooking?

Chef Dale Talde: They have been the single most important influence in my cooking—besides my education at the Culinary Institute of America. They have inspired my point of view as an Asian-American, allowing me to embrace that cross of culture and the idea of fusion. They have made me who I am.

In a recent article in Eater, you talk about diaspora food? What is that?

DT: It’s the cooking of displaced cultures in a new country, like the Filipinos in Chicago. We’ve had to approximate what might be called authentic Filipino food with the resources available to us.

What was the first trip you took as a child?

DT: The first trip I remember taking is one I took to the Philippines. My grandfather had a stroke and as a family, we all took a trip to this foreign, super hot island. It was shocking to an 8-year-old—the food, the smells, the heat. We stayed in the house my mother grew up in with an open-air kitchen with mosquito nets and no air conditioning. Looking back, it was so foreign that I wasn’t super comfortable but it really helped give me a perspective on how my parents lived, how they ate and how they were raised.

What has been your favorite travel destination?

DT: I took my wife to San Sebastián, Spain and it’s was such a magical place. The pintxo food culture (Basque-style tapas) is amazing as was the bounty of fresh seafood because of the town’s coastal location on the Bay of Biscay. 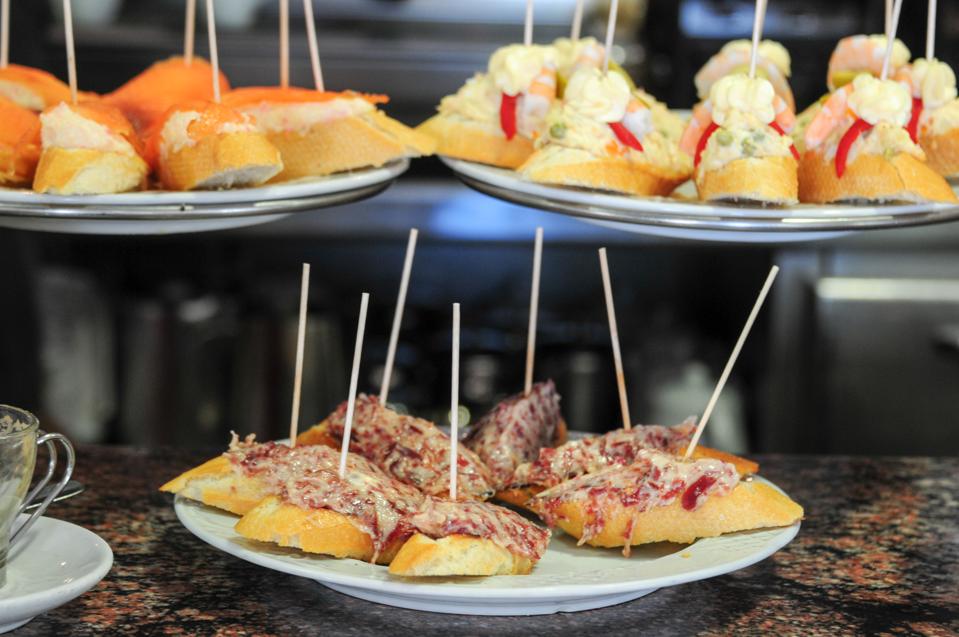 Pinchos on a counter in San Sebastián, Spain. A typical snack of the Basque Country, pinchos are … [+] made of slices of bread topped by various ingredients held in place with a toothpick, which gives the food its name “pincho”, meaning spike.

Anytime you travel and eat outside your country, it helps you think about food in a different light. The simplicity of some of the pintxo dishes and the way seafood was prepared made me think about ways to simplify my cuisine and make ingredients the priority.

What was the best meal ever?

DT: Choosing one best meal is always hard but I would say Sushi Sawada in Ginza, Tokyo, I took my now wife, Agnes, to Tokyo for her birthday. Our last high-end sushi meal was here and it was at an amazing six-seat sushi bar. The rice was the star in every piece, the fish was impeccable and the atmosphere was fun and lively—not super sterile and cold. A really perfect meal.

How would you describe the cuisine and setting of your new restaurant, Goosefeather?

DT: The cuisine at Goosefeather is modern, seasonal Cantonese cooking with a focus on Hong Kong and its traditions of noodles, Cantonese barbeque and dim sum.

Housed in a 180-year old mansion with views of the Hudson River, its interior decor is an eclectic mix of old and new.

What role have your TV appearances played in your career?

DT: That’s a fun question I think they have had a very positive effect. It has been a great way to gain notoriety and buzz for the restaurant. It also makes people feel a certain way about you: They are often skeptical about your presence and wonder if you can really cook. I’ll shoulder the burden and take the shots but I’ll also ask people to check the resume. I’ve been cooking since ‘98 and take what I do very seriously

What is your pet peeve when dining at a new-to-you restaurant?

DT: My biggest pet peeve is when a server tells you how to eat something. I find that extremely annoying.

What advice would you offer on how to find good places to eat when traveling?

What do you always take with you when traveling?

DT: I always take my Chrome backpack because it fits everything, is waterproof, and is lightweight.

Note: This conversation has been lightly edited and condensed for clarity.