Asked by reporters what he thought of former Vice President Joe Biden’s economic plan, the first part of which was released Thursday as part of Biden’s 2020 presidential campaign, President Trump said the proposal was “plagiarized” from his own economic policies—though he did not elaborate on which aspects of the sweeping “Build Back Better” plan he believes were lifted. 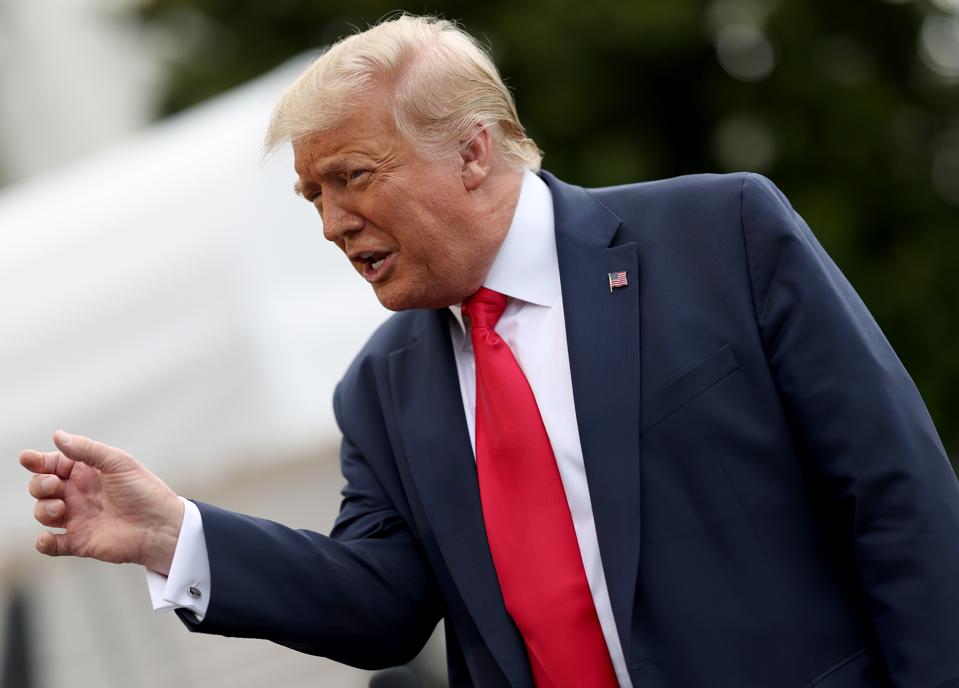 U.S. President Donald Trump speaks to reporters before departing from the White House on Marine One, … [+] on July 10, 2020 in Washington. DC.

Biden’s economic proposal is focused on protecting American industry, promising to bring back the jobs that were lost due to Covid-19, create 5 million new jobs in manufacturing and innovation, and spend $700 billion on American products and research.

While the “buy American” messaging in Biden’s plan, with its focus on struggling American workers and industries, resembles the “America First” rhetoric Trump has espoused since 2015, Politico notes that the new proposal differs “significantly” in the details from Trump’s policies.

Trump has focused on trade policy—he’s raised tariffs on Chinese goods to prop up American producers and renegotiated NAFTA—while Biden’s plan is centered around investment in American manufacturing and jobs.

Biden’s plan also includes assistance in the form of capital for businesses that are struggling as a result of the coronavirus pandemic, as well as provisions that could require federal agencies to purchase pharmaceuticals and medical supplies produced in the United States.

Trump has been working on his own “America First” policy that would require certain essential drugs to be produced in the United States, though that executive order has been delayed, the Washington Post reported Thursday, and could face serious pushback from China.

Biden’s campaign told Politico in a statement that the “Build Back Better” plan is the opposite of Trump’s policies, which have “sent the strong economy he inherited from the Obama-Biden Administration into a full-on meltdown.”

“He plagiarized from me,” Trump said, “but he can never pull it off. He likes plagiarizing. It’s a plan that is very radical left, but he said the right things because he’s copying what I’ve done.” White House counselor Kellyanne Conway also repeated the plagiarism accusations on Fox on Friday.

The accusations seem designed to hark back to a cloud that has hovered over Biden since 1987, during his first presidential campaign, when he was faced with allegations that he had plagiarized remarks from a British politician during a debate. He also acknowledged he had plagiarized a paper in law school but that the plagiarism was not “malevolent,” the New York Times reported at the time. Biden ended his first bid for the presidency amid the controversy. Just last week, Biden’s 2020 campaign acknowledged that it had lifted language word-for-word for its education and climate proposals, the Washington Post reported. Trump has not been immune to plagiarism issues in his short political career, either: First Lady Melania Trump earned widespread condemnation after a speech she gave at the 2016 Republican National Convention borrowed from a speech former First Lady Michelle Obama gave in 2008, and a 2017 White House press release contained language copied verbatim from an ExxonMobil announcement.

Amid A Severe Recession, Trump’s Edge Over Biden On The Economy Has Evaporated (Forbes)

Trump: ‘We Have No Place Left To Store...