Breaking
How To Get Your Startup Business Off The...
How To Create A COVID Safe Construction Site
How to Make a Good First Impression at...
Plan To Buy An Electric Car? Is A...
Covid-19 Death Toll In U.S. Passes 200,000
Apple iOS 14 Has 25 Great Secret Features
5 Decisions That Will Increase Your Chances Of...
Coronavirus Is Shaping Up To Be Very Bad...
TikTok: Why Is Everyone In A Tizzy?
Is It Time For A Bank For Women?
As Israel Locks Down, Its Health Tech Sector...
California Increases Homestead Exemption In New Legislation
Buying The Bulge Is Dangerous
5 Strange Things Happening Right Now In The...
The Best Blogging Platforms (In-Depth Review)
How Will The Coronavirus Impact Your Finances?
How Xbox Series X Will Attempt To Avoid...
Virgin Orbit Seeking Over $100 Million As ‘Jaw...
How To Develop The Confidence To Launch A...
Home Business Trump Administration ‘Certainly Looking At’ Banning TikTok In The U.S., Pompeo Says
Business

Secretary of State Mike Pompeo said in a Fox News interview on Monday that the U.S. is “certainly looking at” restricting TikTok and other Chinese social media apps, reviving national security and privacy concerns about China’s tech giants, and stoking one front in the Trump administration’s trade war with Beijing. 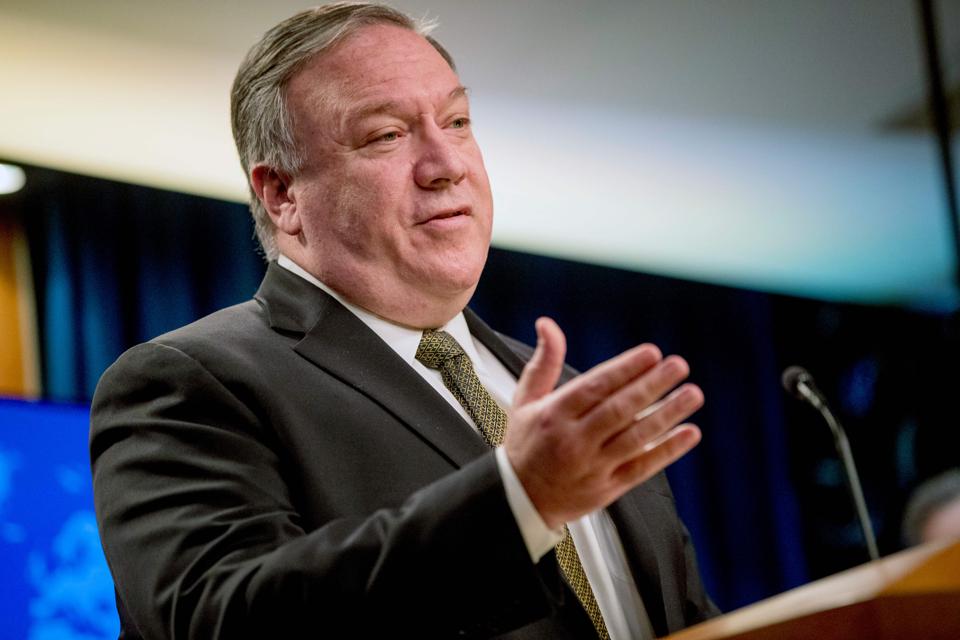 Secretary of State Mike Pompeo said the Trump administration is “looking” at banning TikTok in the … [+] U.S.

Pompeo said the administration has “worked on this issue for a very long time,” adding that Americans should only download the popular video-sharing app “if you want your private information in the hands of the Chinese Communist Party.”

Pompeo’s remarks follow months of concern from Senators, both Republican and Democrat, who consider TikTok among the most high-profile Chinese tech firms to be a threat to U.S. national security.

TikTok has steadily denied claims of data sharing with Beijing and censorship and made big moves to try and allay U.S lawmakers’ security concerns, including recently hiring Disney executive Kevin Mayer as TikTok CEO and COO of ByteDance, and vowing that international users’ date won’t be stored on servers in China.

Pompeo told Fox News: “Whether it was the problems of having Huawei technology in your infrastructure we’ve gone all over the world and we’re making real progress getting that out. We declared ZTE a danger to American national security. With respect to Chinese apps on peoples’ cellphones, the United States will get this one right too.”

45 million. That’s how many TikTok users are based in the U.S., according to Statista.

TikTok is quitting operations in Hong Kong after Beijing imposed a controversial national security law that critics warn will stifle the limited freedoms, including freedom of speech, promised during the handover of the former British colony. The new law gives Beijing sweeping powers to crack down on what it views as subversion, and could have implications on data security, critics say.

ByteDance is one of the dazzling star of China’s tech ecosystem and proof that home-grown companies can compete with Silicon Valley’s giants on an international stage. That success has made it a target as part of the trade war between the United States and China.

Pompeo’s comments are the latest in a long line of national security threat claims levelled at breakout Chinese tech firms. Smartphone maker Huawei has been another high-profile target of the Trump administration, which claims the firm is one of 20 firms operating in the U.S. which are owned and controlled by the Chinese military. Trump has severely curtailed U.S. trade with the world’s second-largest smartphone maker, amid a simmering trade war with China. The administration has also tried to convince intelligence allies to exclude Huawei and telecoms equipment firm ZTE from their 5G networks.

Pompeo warns of potential restriction of Chinese TikTok app; US users may be ceding info to ‘Chinese Communists’ (Fox News)

Could Black Holes Be The Dark Matter Our Universe Needs?