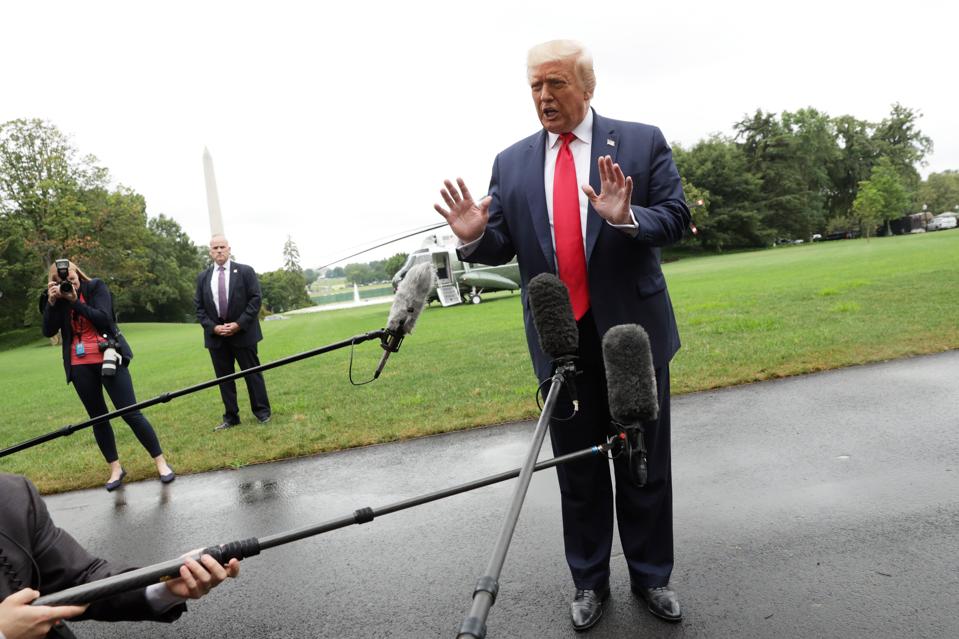 President Donald Trump’s reelection campaign is temporarily shelving its television and radio commercials as it overhauls its media strategy in the wake of the demotion of Campaign Manager Brad Parscale and its weak position in the polls, according to NBC News.

Data from Advertising Analytics cited  by NBC shows that the Trump Campaign spent “virtually nothing” buying time on television and radio stations and networks on Wednesday and Thursday and has “effectively booked nothing through August.”

The Trump Campaign told NBC that Parscale’s replacement Bill Stepien was “fine-tuning the campaign’s strategy” and pledged to ‘“be back on the air shortly even more forcefully exposing Joe Biden as a puppet of the radical left-wing.” A spokesperson for the Trump Campaign didn’t respond to an email seeking comment for this story.

“It’s not uncommon, but tells us three things: something in Trump’s current campaign spots may have been imminently detrimental to them; a new set of information or a new opportunity arose suddenly (and) they weren’t prepared and needed a few days to respond,” said Gordon Borrell, a marketing and advertising analyst, in an interview.. “It also foretells that whatever happened was dramatic and very recent, like within the past two or three days.

The Trump campaign has come under fire from the media for making misleading advertising claims, such as that his Democratic rival Joe Biden supports defunding the police. That’s the theme of a Trump commercial featuring an older woman calling for help from an attacker poised to break-in to her home. Advertising Analytics estimates that the campaign spent $17 million airing that spot on cable and broadcast networks in July, NBC says.

Independent Pro-Trump groups such as America First Action and Restoration PAC are continuing to advertise. As so-called Super PACs, they can’t coordinate their activities with the campaigns they back. Earlier this month, America First Action unveiled a $25 million ad buy in four key battleground states Pennsylvania, Wisconsin, Arizona, and North Carolina that will run through Labor Day. Restoration recently announced that it was spending $2 million to air what climbed to be a “devastating” anti-Biden ad showing the former Vice President exaggerating his academic background.

Though the coronavirus pandemic has killed more than 150,000 Americans and pushed the U.S. economy into a record decline of nearly 33 percent decline in the second quarter, it doesn’t seem to be hurting political ad spending, which shows no signs of weakness.

Advertising Analytics and Cross Screen Media raised their forecast for 2020 political speeding in May by 12 percent to $6.7 billion. They expect $2.18 billion to be spent on the presidential general elections on top of the $1.17 billion spent on the primaries. According to the report, candidates for House and Senate races will shell out $1 billion each on their campaigns.

“This is due to historic levels of primary spending, record-breaking fundraising, the lack of face-to-face campaigning driving higher shares of budgets to paid media, and increased levels of insight into digital video spending,” according to a report released by the companies.

Battleground states such as Pennsylvania, Georgia, and Arizona are going to be bombarded with political ads, as they are every four years. The Advertising Analytics and Cross Screen report expects more than a dozen markets to generate more than $100 million in ad revenue, including Philadelphia, Atlanta, and Phoenix.

This Mother-Daughter Team Was Building A Thriving Bakery That Served Corporate Events When The Pandemic Hit. Here’s How They’re Pivoting Successfully.

Walmart Amazing Decision Not To Open On Thanksgiving...

Federal Coronavirus Aid May Come Too Late for...

Don Toliver And ‘No Idea’—Houston To TikTok To...