Breaking
How To Get Your Startup Business Off The...
How To Create A COVID Safe Construction Site
How to Make a Good First Impression at...
Covid-19 Death Toll In U.S. Passes 200,000
5 Decisions That Will Increase Your Chances Of...
Coronavirus Is Shaping Up To Be Very Bad...
Is It Time For A Bank For Women?
As Israel Locks Down, Its Health Tech Sector...
Buying The Bulge Is Dangerous
5 Strange Things Happening Right Now In The...
The Best Blogging Platforms (In-Depth Review)
How Will The Coronavirus Impact Your Finances?
How Xbox Series X Will Attempt To Avoid...
Virgin Orbit Seeking Over $100 Million As ‘Jaw...
How To Develop The Confidence To Launch A...
USPS Covid-19 Coronavirus Plan To Send Every Household...
Android Circuit: Mysterious Samsung Galaxy, Google’s Next Pixel...
Snowflake: Valuable Lessons For Entrepreneurs
After Man Shoots Fiancee’s Parents, Bloody Footprints Lead...
Home Business Trump Campaign Says ‘Tear Gas’ Wasn’t Used To Clear Protesters. CDC Guidelines Say Otherwise.
Business

After a storm of criticism, the Trump campaign on Tuesday argued that police officers didn’t use tear gas on a group of protesters the day before in Lafayette Square before the president appeared for a photo-op—but that appears to not be false: police did admit to using a pepper irritant, which the U.S. Centers for Disease Control classifies as a type of tear gas. 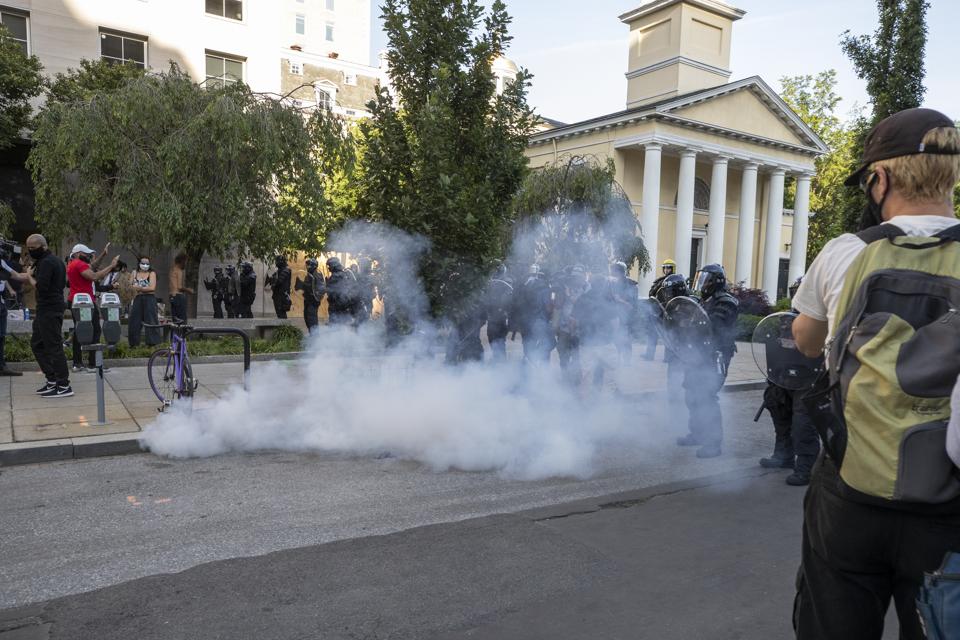 Arlington County Police officers, with St. John’s Church behind them, use gas to move demonstrators … [+] back after they gathered to protest the death of George Floyd, Monday, June 1, 2020, near the White House in Washington. Floyd died after being restrained by Minneapolis police officers.

A Trump campaign spokesman asked media outlets, including Forbes, to retract stories stating that tear gas was used to clear a group of protesters so President Donald Trump could participate in a photo-op in front of a church Monday.

The spokesman pointed to a statement from the U.S. Parks Police, which said officers did not use tear gas and instead deployed “smoke canisters and pepper balls” on a group of “combative” protesters after they “continued to throw projectiles, and attempted to grab officers’ weapons.”

According to a fact sheet from the CDC, “tear gas” can be used as an umbrella term for various non-lethal riot control agents, including pepper spray.

According to multiple reports, the protests were largely peaceful until police officers used flash grenades and irritants to clear the group.

The conservative website The Federalist published a story Tuesday declaring the media “falsely claimed” tear gas was used against protesters—which Trump then retweeted—but no major media outlet has issued a retraction.

Neither the Trump campaign nor the Parks Police immediately responded to a request for comment from Forbes.

Trump faced a flurry of bad press after media outlets reported police used tear gas on a group of peaceful protesters so he could walk to St. John’s Episcopal Church, which was set on fire the night prior, for a photo-op. According to CNN, the New York Times and the Washington Post, Trump had been enraged by stories that reported he had retreated to an underground bunker as riots raged near the White House Friday night, and wanted to be seen outside the White House gates. The Washington Post reported that Attorney General William Barr personal ordered the removal of the protesters near the White House.

“Suddenly, around 6:30, there was more tear gas, more concussion grenades, and I think I saw someone hit by a rubber bullet—he was grasping his stomach and there was a mark on his shirt. The police in their riot gear were literally walking onto the St. John’s, Lafayette Square patio with these metal shields, pushing people off the patio and driving them back,” Rev. Gini Gerbasi, the rector of St. John’s Church in Georgetown, wrote in a Facebook post describing the events as she saw them unfold.

Sega’s Celebrating A Big Anniversary With A Tiny Game Gear