Breaking
Looking To Improve Efficiency In Your Business? Here’s...
AI and machine learning for business
How Social Media Changed the World
Shopify: The Pros and Cons
Should your business go green?
Expanding Your Business Into Spain: What You Need...
Essentials For Your Office Coming Out Of COVID-19
What Can Marketers Learn From Digital Cults?
Why NASA’s James Webb Space Telescope Will Never...
Increasing HR Effectivity and Efficiency through Software Solutions
The Difference Between Building A Startup In Bull...
Fluor Corp Ranked Among Today’s Top Shorts
Common Pitfalls to Look Out for When Buying...
Will the Olympics go ahead this year?
Pack Up the Big Top: Insights from MozCon...
Best WordPress Themes for Blogs
Home Technology Trump Condemns California Wind Farm As Decrepit Eagle Killer
Technology

Thousands of turbines generate 1,600 megawatthours a year near Palm Springs.

The trip reminded the president of his antipathy toward one of Palm Springs’ most notable landmarks — the collection of several thousand turbines that since the 1980s have been catching the winds blowing through the San Gorgonio Pass. At his campaign rally in Colorado Springs on Thursday night, the president lambasted the Palm Springs turbines — some of which have been sitting still for years — as decrepit bird killers.

“They are closed, they’re rotting, they look like hell” and they’re killing bald eagles. “Blow wind please; please keep the birds away from those windmills, please,” he said. “You know if you shoot a bald eagle they put you in jail for a long time. But the windmills knock them out like crazy. It’s true.”

Bald eagles are not known to live in the San Gorgonio Pass; government scientists in 2015 study found evidence of only two golden eagle killings by turbines near Palm Springs.

The turbines, said Trump, “get tired, they get old, they get rusty.” Kind of like some of his political rivals. “Crazy Bernie is not big into natural gas and oil and the things that keep our great factories and plants going.” Referring of course to Bernie Sanders. 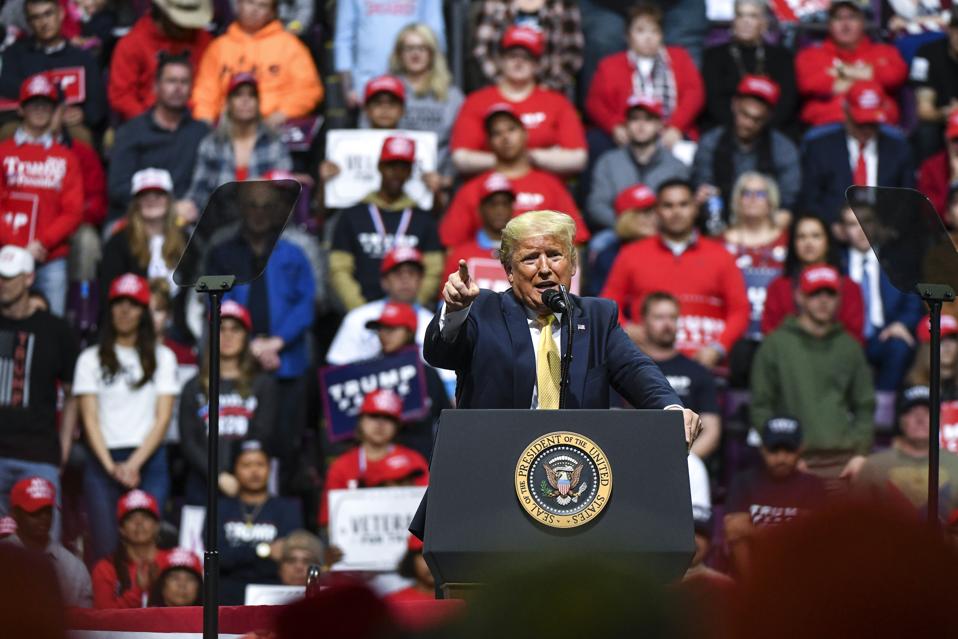 At Thursday’s rally in Colorado Springs.

Naturally, the wind turbines have some fans. Palm Springs Mayor Geoff Kors reportedly took issue with Trump’s criticisms. “I find our windmills and the impact they are having on the environment to be especially beautiful,” responded Kors in a statement. “Palm Springs is proud of the 100% renewable and carbon free energy produced by the windmills.”

The San Gorgonio wind farms generate about 1,600 megawatthours of power each year, according to the California Energy Commission.

This isn’t the first time Trump has dissed the Gorgonio Pass wind farms. Back in 2012 he tweeted that Palm Springs “has been destroyed — absolutely destroyed — by the world’s ugliest wind farm at the Gateway on interstate 10. Very very sad!”

The Talent War: Walmart And Amazon Compete For A Better Workplace