Breaking
What You Need To Know About Your Startup...
Governor Signs Landmark Student Loan Borrower Protection Bill...
Reddit Co-Founder Alexis Ohanian Plans $150 Million Investment...
This Week In XR: Enterprise Adoption And Financing...
The Disadvantages Of Aging In Place
How Advances In Customer Service Can Take Telehealth...
5 Reasons Why Your Startup Needs To Be...
Beyond-Professional: What Is The New Workplace Normal?
After 75% Rally, Johnson Controls Stock Looks Fully...
The Future Is Now: This Start-Up Offers Carbon-Free...
Eight Boxes To Check If You Want To...
Where Have All The Entrepreneurs Gone? A Conversation...
Seven Lessons On Raising Funds During A Seed...
Nintendo Just Stealth Released ‘Kirby Fighters 2’ For...
Will Christmas Come Early For Retailers This Year?
Two New Bills In Congress Offer Clarity For...
Home Business Trump Faces Another Blow In Tuesday’s Missouri Medicaid Expansion Vote
BusinessTechnology 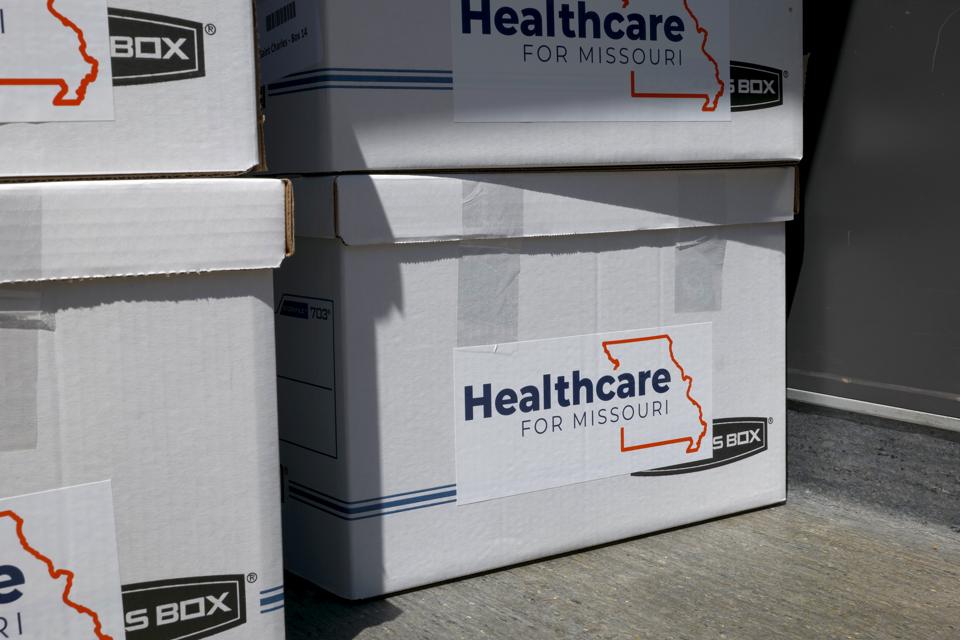 Boxed up signed petitions are headed to the Missouri Secretary of State’s office earlier this year, … [+] setting the stage for this Tuesday’s Aug. 4 election to decide whether to expand Medicaid to more than 200,000 in the state.

Missouri voters Tuesday will decide whether to expand Medicaid via ballot initiative in what could be yet another blow to the Trump administration and its anti-Obamacare health policy.

A vote this week in Missouri to expand Medicaid under the Affordable Care Act would be seen as a huge blow to the Trump administration, which has made repealing the law a signature part of its first three years in office. And Republican-leaning Missouri is poised to be the sixth successful ballot campaign – and second this year – to expand Medicaid to hundreds of thousands of Americans since Trump took office in 2017.

“For a second time this summer, health care is on the ballot in a state that Trump won by double digits in 2016, and once again, red-state voters have the chance to send a strong message that they want more health care, not less,” said Jonathan Schleifer, executive director of The Fairness Project, which is working with the ballot initiative’s supporters in Missouri and has helped several other states win Medicaid expansion. The Fairness Project is working with the group “Yes on 2: Healthcare for Missouri,” which sponsored the ballot initiative.

The Trump White House and Republicans that include Missouri Gov. Mike Parson are opposed to the ACA and the ballot measure, which would expand Medicaid to more than 200,000 in the state. Earlier this summer, the Trump administration took more steps to once again try to repeal the ACA, which is now 10 years old and has expanded health coverage to more than 22 million Americans.

“I don’t think it’s the time to be expanding anything in the state of Missouri right now,” Parson told reporters in Missouri last week. “There’s absolutely not going to be any extra money whatsoever.”

But supporters of Medicaid expansion argue it’s a good deal for Missouri and they are on a role after the successful vote in Oklahoma just a month ago to expand health coverage in that deep red state.

Medicaid expansion has wide bipartisan support that includes the business community via the Missouri Chamber of Commerce. Trump’s opponent, former vice president Joe Biden, supports Medicaid expansion in the states and is gaining support in Missouri.

From 2014 through 2016, the ACA’s Medicaid expansion population was funded 100% with federal dollars. The federal government still picks up 90% or more of Medicaid expansion. It’s a better deal than before the ACA, when Medicaid programs were funded via a much less generous split between state and federal tax dollars.

The Oklahoma effort to become the 37th state to expand Medicaid was just the latest momentum in Republican-leaning states where lawmakers and governors blocked efforts to expand health insurance coverage to more poor Americans under the ACA before voters took matters into their own hands in ballot issues.

The Oklahoma campaign followed successful 2018 ballot initiatives in Nebraska, Idaho and Utah. Those states, like Maine in 2017, bypassed Republican governors and legislatures to expand Medicaid by public referendum.

Supporters of Medicaid expansion in Missouri believe the spread of the coronavirus strain Covid-19 and lack of healthcare access during the pandemic should help win support for the ballot initiative. “In the midst of this pandemic, Missourians want to know that their neighbors have access to health care that isn’t dependent on how much money is in their bank account and we expect that message to come through loud and clear on Tuesday,” said the Fairness Project’s Schleifer.

Remote Education Is A Covid-19 Retiree Opportunity For You