Axios reported Friday that President Trump may “stop appearing daily and make shorter appearances” at the White House’s daily coronavirus briefings, with staffers believing them to be the catalyst for poor public trust in the administration’s coronavirus response and former Vice President Joe Biden’s lead in key battleground states. 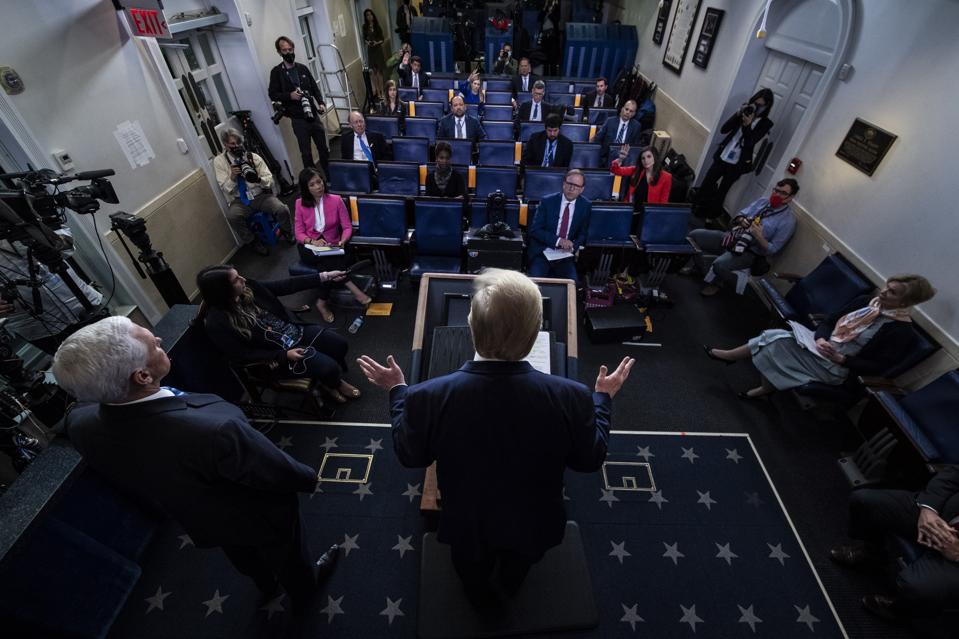 The report came soon after an uncommonly abrupt 21 minute briefing, which followed a flurry of criticism over Trump’s suggestion on Thursday that injecting disinfectant could be an effective treatment for coronavirus, which he called “sarcastic” the next day.

Axios reported that White House staffers told the President his overexposure from the briefings, which rarely introduce novel information, “are part of the reason polls aren’t looking good for him right now against Joe Biden.”

Friday marked the end of a week in which Biden led or tied Trump in every single poll, in some cases by as much as 8 points, nationally and in crucial swing states like Michigan, Pennsylvania and Florida.

Polls have also found that Trump is one of the least trusted public figures when it comes to dispensing information about coronavirus, typically trailing governors, local officials, Biden and even his own health officials, like Dr. Anthony Fauci.

A Morning Consult poll released Friday found that while 64 percent of Americans tune into the briefings, the words most commonly used to describe them are “frustrating,” “misleading,” “counterproductive” and “childish,” while the least common descriptions include “comforting,” “productive” and “presidential.”

In Pennsylvania, a Fox43/Susquehanna poll found that just 20% of voters in the crucial swing state say the White House briefings are their most trusted source of coronavirus information, with most relying on a variety of news outlets to stay up to date.

While Democrats have been consistent in their criticism of the briefings, even some Republican lawmakers have expressed dissatisfaction with them. The New York Times NYT reported earlier this month that Lindsey Graham, at times one of Trump’s fiercest defenders, said his performances at briefings “sometimes drown out his own message,” and that reducing the briefings to once-a-week could convey it better.

The Times quoted other GOP lawmakers as suggesting that Trump “summon a broader range of the country’s leaders, including former Presidents George W. Bush and Barack Obama,” and yield more to experts and his more outwardly empathetic Vice President Mike Pence.

This week wasn’t the first time the president used the briefings as an opportunity to promote an unproven treatment for coronavirus. In late March, he drew criticism from experts for recommending malaria drugs chloroquine and hydroxychloroquine, which the FDA now warns could pose serious, even fatal risks.

What to look out for

Whether Trump actually skips the meetings, as he and his administration have a penchant for sending mixed and often conflicting messages.

The most recent example of this came when Trump walked back his seemingly serious comments on using disinfectant to combat coronavirus by saying they were “sarcastic,” a defense which CNN’s Jake Tapper slammed as a “bald-faced lie.”  The sarcasm claim was even contradicted by new White House Press Secretary Kayleigh McEnany, who defended the president’s disinfectant remarks as serious and said the media took them “out of context”

The Dark Side Of Deepfake Artificial Intelligence And...

Andre Drummond Being Sought Most By Hornets, Celtics,...

Impact Of The Coronavirus On Business