The city of Jacksonville, Florida, issued a mask mandate on Monday, ahead of the Republican National Convention in August, which was relocated from Charlotte, North Carolina, in large part to avoid social distancing and mask requirements. 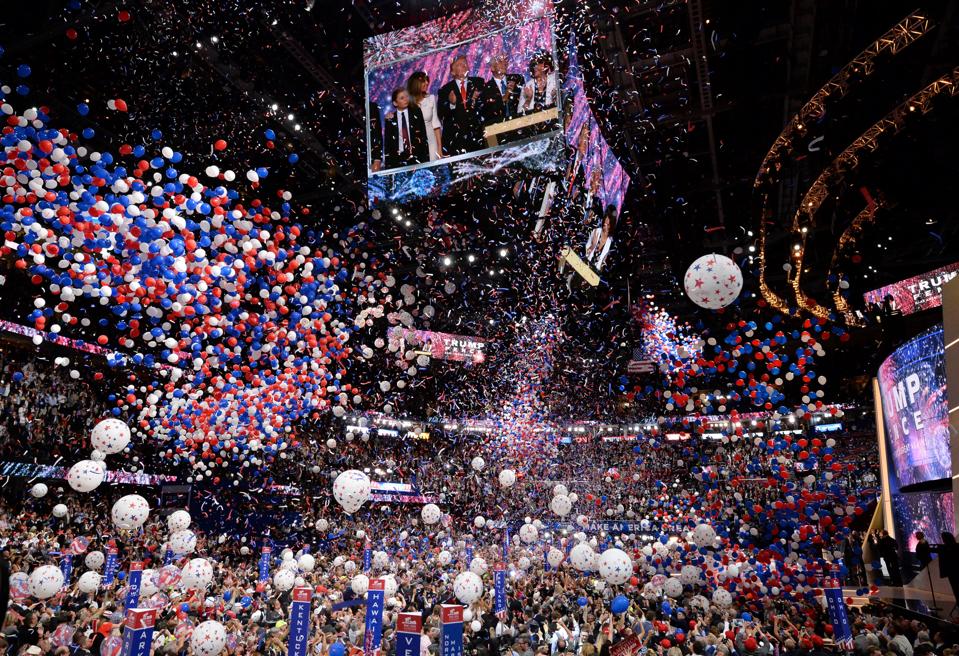 Donald Trump accepts the nomination at the Republican National Convention on July 21, 2016 at the … [+] Quicken Loans Arena in Cleveland, Ohio.

“At 5 p.m. today, the City of Jacksonville will be adopting a mandatory mask requirement for public & indoor locations, and in other situations where individuals cannot socially distance,” the City announced on Twitter.

Jacksonville Mayor Lenny Curry, who was not present for the announcement on Monday, had said two weeks earlier that a mask mandate wouldn’t be a “prudent action to take” because “we do not need to have law enforcement out in public enforcing this” and “it’s not an efficient use of resources”

But Jordan Elsbury, Curry’s chief of staff, said Monday, “we have conversations with hospital providers and CDOs and other members of our community and we felt that it was time to take this step,” though the city’s public affairs director, Nikki Kimbleton, said the city would struggle to enforce the mandate and urged people to “exercise that personal responsibility and wear those masks.”

Elsbury said Curry came to the decision after a conference call with hospitals and after the Navy and the Coast Guard, both of which have bases in Jacksonville, required mask-wearing indoors.

The move comes as a blow to President Trump, who chose to relocate the main events of the convention from Charlotte earlier this month after North Carolina Gov. Roy Cooper rejected his plan to not require masks or social distancing at the event.

Asked how the mandate would be enforced at the convention, Duval County Sheriff Mike Williams said, “we’ll continue to work on that and have a detailed plan, what that may look like.”

Jacksonville is far from alone in issuing a mask mandate. Most major cities in Florida now require masks in public.

Curry, a Republican, took significant criticism for allowing the convention to relocate its marquee events to Jacksonville. A letter signed by nearly 200 Florida doctors argued “allowing this number of people to descend on Jacksonville is unequivocally provocative of disease, predictably harmful, and medically disrespectful to the citizens of this city, much less the rest of the country.”

40,000. In the letter, the doctors claimed “it is estimated that more than 40,000 people, including the press and protestors, will attend from all over the U.S.,” which they said is “extremely dangerous.”

As cases surge in the South and West, Jacksonville’s mask mandate comes as the latest indication that Trump will not be able to keep up a facade of pre-pandemic normalcy amid a worsening outbreak. His rally in Tulsa, at which there was little social distancing or mask wearing, in part because the Trump campaign took deliberate steps to reduce social distancing, has led to campaign manager Brad Parscale, other campaign staff and dozens of secret service agents who worked the rally having to self-quarantine.

You Should Probably Be Watching ‘DC’s Legends Of Tomorrow’