Breaking
How To Get Your Startup Business Off The...
How To Create A COVID Safe Construction Site
How to Make a Good First Impression at...
Covid-19 Death Toll In U.S. Passes 200,000
5 Decisions That Will Increase Your Chances Of...
Coronavirus Is Shaping Up To Be Very Bad...
Is It Time For A Bank For Women?
As Israel Locks Down, Its Health Tech Sector...
Buying The Bulge Is Dangerous
5 Strange Things Happening Right Now In The...
The Best Blogging Platforms (In-Depth Review)
How Will The Coronavirus Impact Your Finances?
How Xbox Series X Will Attempt To Avoid...
Virgin Orbit Seeking Over $100 Million As ‘Jaw...
How To Develop The Confidence To Launch A...
USPS Covid-19 Coronavirus Plan To Send Every Household...
Android Circuit: Mysterious Samsung Galaxy, Google’s Next Pixel...
Snowflake: Valuable Lessons For Entrepreneurs
After Man Shoots Fiancee’s Parents, Bloody Footprints Lead...
Home Technology Trump On Healthcare Workers: ‘They’re Running Into Death Just Like Soldiers Run Into Bullets’
Technology

During his visit to a medical equipment distribution facility in Allentown, PA, on Thursday, President Trump announced an expansion of the Strategic National Stockpile to include a 90-day supply of testing equipment and critical care drugs after exhausting it earlier during the COVID-19 coronavirus pandemic. 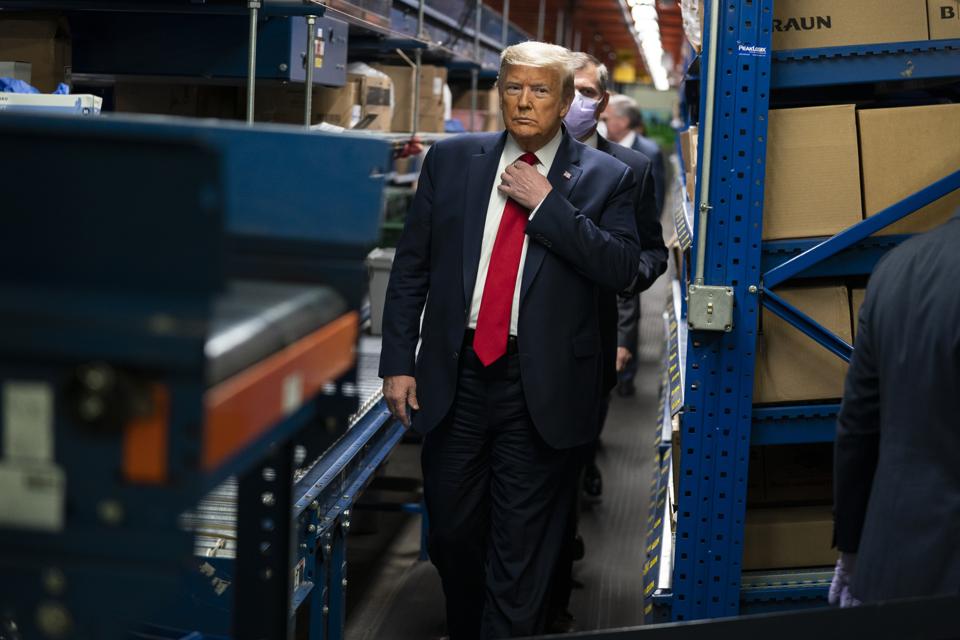 Speaking to workers at Owens & Minor, Inc. Distribution Center—where once again he did not wear a mask—Trump wavered between announcing the new initiatives and ad libbing criticisms as he does during his campaign rallies.

According to Trump, the stockpile will integrate with distributors and hospitals to better monitor the procurement and delivery of supplies and will “manage and rotate inventory” that can last 90 days.

Additionally, Trump announced he was invoking the Defense Production Act to direct the U.S. International Development Finance Corporation (DFC)—an agency he signed into being in 2018 that invests in economic development programs in developing countries—to finance domestic companies.

While detailing these during an official speech, Trump called former Vice President Joe Biden “Sleepy Joe” and the Obama administration’s response to the H1N1 pandemic “not well-handled,” though the 12,469 U.S. deaths in a full year from the virus were lower than the estimates at the time.

Trump also railed against the state’s Democratic Governor Tom Wolf, the media—”they are a disaster”—and against “globalists” in reference to the DFC agency instituted under his administration, saying “You know what a globalist is? They want the globe to do well but they don’t care about us.”

“The moment this terrible virus reached our shores, each of you has worked relentlessly to get the vital supplies to our healthcare warriors,” Trump said before going off script. “And they are warriors aren’t they, when you see them going into those hospitals and they’re putting the stuff that you deliver, but they’re wrapping themselves, and the doors are opening, and they’re going through the doors, and they’re not even ready to go through those doors, they probably shouldn’t, but they can’t get there fast enough, and they’re running into death just like soldiers run into bullets in a true sense, I see that with the doctors and the nurses and so many of the people that go into those hospitals, it’s incredible to see, it’s a beautiful thing to see.”

The stockpile was established in 1999 to prepare for biological attacks and support state and local supplies, though its use has expanded to address natural disasters and pandemics, like the H1N1 outbreak in 2009. Former homeland security official Tara O’Toole cautioned that the stockpile is a “bridge…it’s not a replacement for the private sector.”

The U.S. leads the world in confirmed cases of the coronavirus and reported deaths with 1,411,466 and 85,489 respectively.

Dr. Rick Bright, a top vaccine doctor who was removed from his position as director of the Biomedical Advanced Research and Development Authority, testified earlier on Thursday that “lives were endangered, and I believe lives were lost” because warnings to ramp up production of medical equipment were ignored by the administration.

Michael Bowen, an executive at a surgical mask producer in Texas, also testified Thursday to the House Energy and Commerce Subcommittee, saying the Department of Health and Human Services didn’t take him up on an offer to buy masks beyond the end of the year, preventing him from expanding his current capacity. Bowen was also critical of the response and its reassignment of Bright “I’m a lifelong Republican, and I’m embarrassed by how that’s been handled,” Bowen said. “Like Rick Bright said, it’s the scientists we need to be listening to, and we’re not.”

5 Lessons To Make The Most Of Working From Home