Breaking
‘Remnant: From The Ashes’ Is Cheaper Than Ever...
Top Stocks To Buy Today As Markets Rise...
How To Sell Artisanal Ice Cream In The...
Making America’s Trumps Pay Their Fair Share
Fortnite Season 4, Week 9 Challenges Revealed And...
Yesterday You Were Just A Business; Today You...
Should Your Company Help Get Out The Vote?...
Hyperautomation And What It Means For Your Business
The Role Of The Indie Agency In Our...
Parker-Hannifin Crosses Pre-Covid Peak But Investors Set To...
6 Reasons Your Cold Messaging Efforts Fail And...
4 Analytics Categories To Track To Improve Your...
Predictions 2021: Cloud Computing Powers Pandemic Recovery
This Is Why You Need A Strategy In...
Economic Research Exposes Significant Flaws In DOL H-1B...
How Breast Cancer Turned This Entrepreneur Into A...
Home Business Trump Ordered These Companies To Make Medical Supplies Under The Defense Production Act
Business 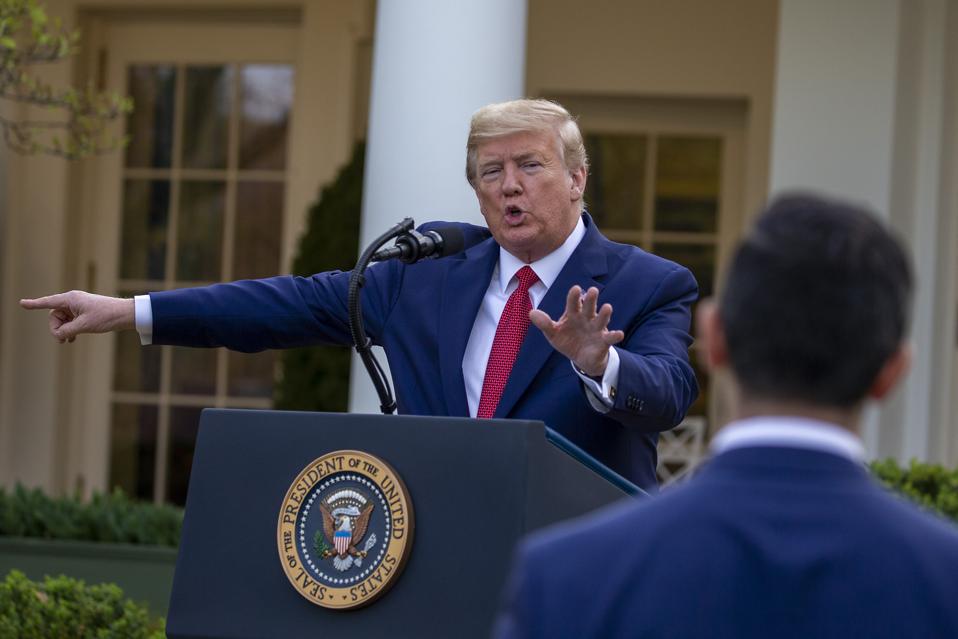 Trump—amid criticism from both sides—has thus far only used the act sparingly.

Topline: While President Trump originally signed the Defense Production Act March 18—amid mounting calls for him to compel companies to produce much-needed medical supplies—he’s been conservative with its use, invoking it on only a few occasions. Here’s a running list of times he’s used it so far:

Surprising fact: A day before using the act on GM, Trump mentioned in his briefing he had used it on “two minor occasions” without elaborating. He was possibly referring to its use to prevent price gouging and hoarding of supplies in a statement on March 23.

Key Background: The Defense Production Act of 1950 was enacted at the outset of the Korean War and allows the federal government to compel the private sector through purchase commitments and loan guarantees to produce equipment for the benefit of national defense. While Trump claimed he would invoke the act on March 18, he continued to delay its use, arguing that private companies were volunteering and that the federal government isn’t a “shipping clerk.” After using the act to compel General Motors to manufacture ventilators—something it had already been doing for over a week—Trump put his top trade adviser Peter Navarro in charge of overseeing the acts use.

Chief Critic: Governors, senators and over a hundred former national security officials from both sides of the political aisle have been urging the president to take full advantage of the Defense Production Act, not only to address widespread supply shortages, but to better coordinate where supplies get distributed across the country given governors are bidding against other states and federal agencies to procure equipment. “Look at the bizarre situation we wind up in: Every state does its own purchasing,” New York Governor Andrew Cuomo said on March 31. “It’s like being on eBay, with 50 other states bidding on a ventilator.”

Crucial Quote: Part of Trump’s hesitation to use the act appears to be his fears that it represents a nationalization of industry, though the Defense Production Act includes payment to the companies themselves. In reaction to the sentiment, Cuomo said, “Yes, it is an assertion of government power on private sector companies. But so what. This is a national emergency.”

Big Number: 960,000. That’s how many coronavirus patients may need to use a ventilator, according to an estimate from the University of Nebraska Medical Center. According to Cuomo on April 2, New York only has six days of ventilators left in its stockpile. He added, “our attitude here is we’re on our own,” because “I don’t think the federal government is in a position to provide ventilators to the extent that the nation may need them.”

No Seat At The Table For Restaurants: CARES Act Leaves Hospitality Industry Hanging