Breaking
How To Get Your Startup Business Off The...
How To Create A COVID Safe Construction Site
How to Make a Good First Impression at...
Best Legal Practices For Reopening Sports Venues During...
Why Now Is A Good Time To Start...
Here’s Why Texas Instruments’ Stock Growing Almost 2x...
LinkedIn’s 50 Best Startups To Work For In...
3 Marketing Mistakes Holding You Back From Hitting...
Is The Matter In Our Universe Fundamentally Stable...
Majority Support Covid-19 Price Controls Says New Brookings...
Reimagined Pan-Mass Challenge Approaches $41M 2020 Fundraising Goal
Is Bitcoin Poised To Bounce Back After Its...
These ‘Temporary’ COVID-19 Changes Will Become Permanent
How Will Our Mental Health Be Affected By...
Selling A Business During A Pandemic: When Talented...
Top 10 Digital Transformation Trends For 2021
Two Veteran Entrepreneurs Aspire To Clean Up America’s...
PPP Forgiveness Applications Are Opening Up. Should You...
Best Domain Registrar
Home Finance Trump Promises Executive Orders On Unemployment, Student Loans And Eviction Ban After Stimulus Talks Fail
Finance

With key benefits from the CARES Act having already expired and lawmakers unable to agree on a new coronavirus relief package, President Trump on Friday doubled down on his intention to pursue executive orders to prop up the ailing American economy if lawmakers can’t reach a deal on the next round of aid legislation. 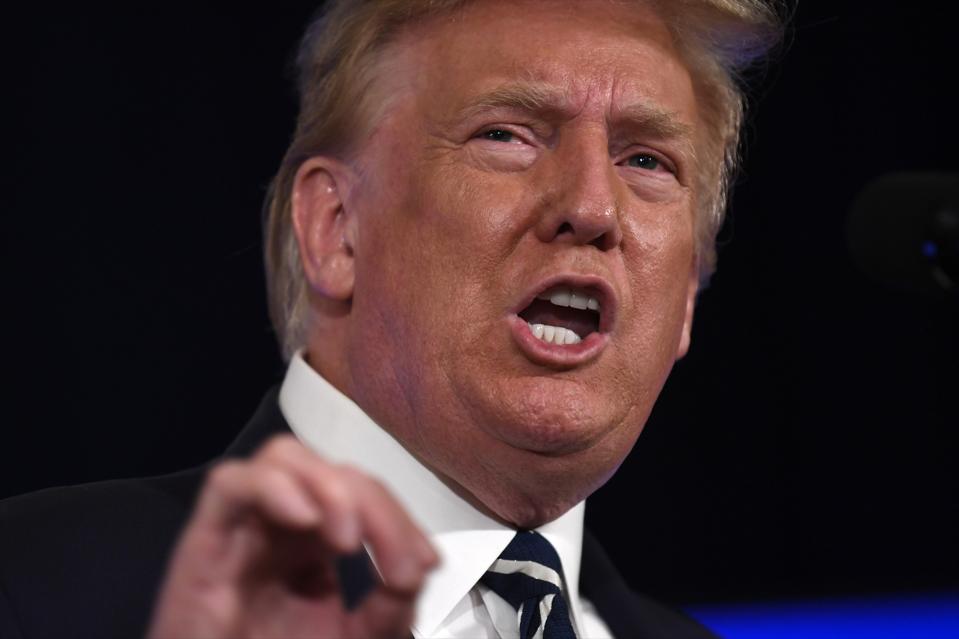 “If Democrats continue to hold this critical relief hostage, I will act under my authority as President to get Americans the relief they need,” Trump said during a press briefing.

Trump laid out a plan to use executive orders to extend enhanced unemployment benefits through the end of the year (though declined to say at what level), defer student loan payments and forgive interest “until further notice” (a policy that will likely apply only to federal loans) and extend an eviction moratorium if no deal can be reached.

Negotiations on Friday reached what could be a permanent impasse after a self-imposed deadline came and went without an agreement or any significant progress; White House chief of staff Mark Meadows and Treasury Secretary Steven Mnuchin said that they would recommend Trump move ahead with executive action after Friday’s unsuccessful meeting.

Trump also said he would use an executive order to defer the payroll tax through the end of the year, and possibly longer, with that deferment being retroactive to July 1.

The Trump administration began preparations for these actions by asking federal agencies to identify unspent funds left over from CARES Act allocations in March, the Washington Post reported Wednesday; White House economic advisor Larry Kudlow on Friday confirmed that the administration was considering repurposing those funds for new relief measures, the Post said.

When asked by a reporter about the timing of the executive orders, Trump replied that they could be signed by the end of the week, and that “they’re being drawn by the lawyers right now.” White House chief of staff Mark Meadows said that it was likely the executive actions would come over the weekend, the New York Times reported Friday.

What we don’t know

It’s not clear what power the president has to order federal spending without explicit approval from Congress. When asked if he was concerned about the potential legality of the planned executive orders, Trump replied, “no, not at all. You always get sued.”

A payroll tax cut has long been a priority for President Trump, even before the Covid-19 crisis. Trump has said that suspending or eliminating the payroll tax—which is paid by both employers and workers to fund Social Security and Medicare—will boost hiring. Critics say that a payroll tax cut would be a poorly targeted relief measure, since it won’t help the unemployed or retired and would benefit high earners more than low earners. It would also divert funds from Social Security.

Trump took to Twitter on Friday afternoon to criticize Democrats for insisting on more federal aid to states and local governments and, by extension, a more expensive relief package. “No interest,” he said. “We are going a different way!”

During Friday’s press conference, Trump again took aim at Democrats for pushing for relief provisions that he says have “nothing to do” with the coronavirus pandemic.

1.8 million. That’s how many jobs the U.S. economy added in July. It’s a more modest figure than the 4.8 million jobs that came back in June, but it’s a sign that the economy was still able to improve despite an alarming uptick in Covid-19 cases over the course of the month. That said, unemployment is still hovering at record levels. According to the Labor Department, some 31.3 million Americans are currently claiming some form of unemployment benefit.

Representatives from the White House—chief of staff Mark Meadows and Treasury Secretary Steven Mnuchin—have been meeting with top Democrats—House Speaker Nancy Pelosi (D-Calif.) and Senate Minority Leader Chuck Schumer (D-N.Y.)—for days in an attempt to come to an agreement on a new round of federal relief legislation. Amid deep divisions on a myriad of issues (from federal unemployment benefits to state and local aid to nutrition programs and to school funding, testing, and the Postal Service), the failure to agree on a new bill came down to its price tag. Republicans have been adamant that the new bill clock in at no more than $1 trillion, while the Democratic plan was three times more expensive. Democrats on Friday offered to cut their proposal to $2 trillion if the GOP would come up to meet it, but Mnuchin dismissed that offer as a “non-starter.”

Princeton Reverses Its Decision To Bring Undergraduates Back To Campus