Breaking
How To Get Your Startup Business Off The...
How To Create A COVID Safe Construction Site
How to Make a Good First Impression at...
Biden Was Right. The Hispanic Market Is Incredibly...
Plan To Buy An Electric Car? Is A...
Covid-19 Death Toll In U.S. Passes 200,000
Apple iOS 14 Has 25 Great Secret Features
5 Decisions That Will Increase Your Chances Of...
Coronavirus Is Shaping Up To Be Very Bad...
TikTok: Why Is Everyone In A Tizzy?
Is It Time For A Bank For Women?
As Israel Locks Down, Its Health Tech Sector...
California Increases Homestead Exemption In New Legislation
Buying The Bulge Is Dangerous
5 Strange Things Happening Right Now In The...
The Best Blogging Platforms (In-Depth Review)
How Will The Coronavirus Impact Your Finances?
How Xbox Series X Will Attempt To Avoid...
Virgin Orbit Seeking Over $100 Million As ‘Jaw...
Home Business Trump Rollbacks Of Energy Regulations May Not Survive A New Administration
Business

Trump Rollbacks Of Energy Regulations May Not Survive A New Administration 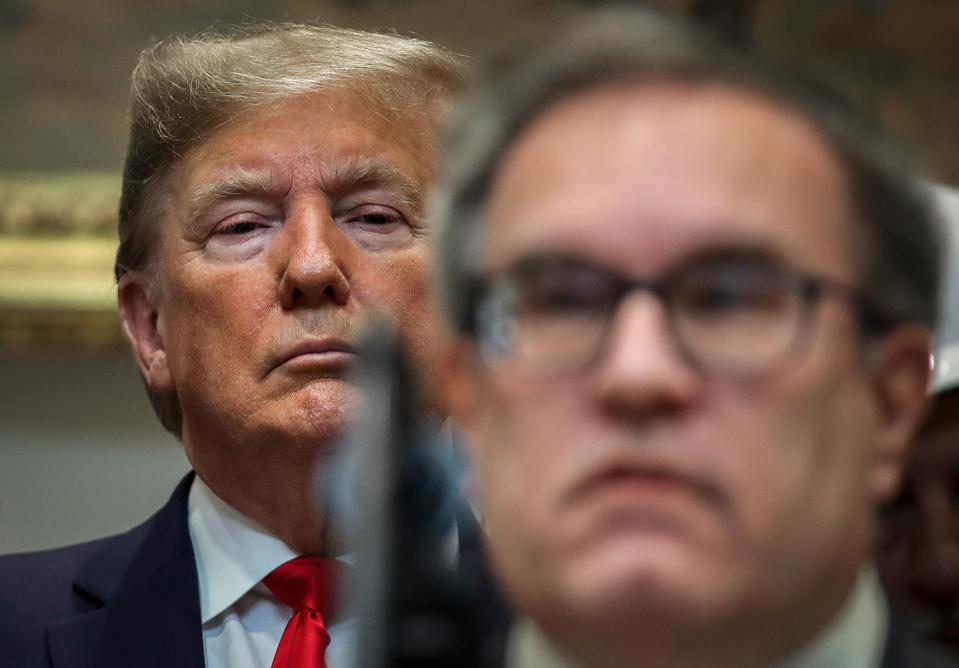 WASHINGTON, DC JANUARY 9: (L-R) U.S. President Donald Trump looks on EPA Administrator Andrew … [+] Wheeler speaks during an event to unveil significant changes to the National Environmental Policy Act, in the Roosevelt Room of the White House on January 9, 2020 in Washington, DC. The changes to the nations landmark environmental law would make it easier for federal agencies to approve infrastructure projects without considering climate change. President Trump also took several questions from reporters, including questions of Iran and impeachment. (Photo by Drew Angerer/Getty Images)

President Trump has gone to great lengths to undo the regulatory protections put in place by his predecessor, Barack Obama.  At recent count, Trump has rolled back or is in the process of unraveling some 100 Obama-era environmental and health rules, many of which were enacted by the EPA and Department of the Interior to limit pollution and climate damages from the fossil fuel industry.  In fact, Trump is betting much of his legacy on his crusade to erase Obama from the nation’s regulatory memory.

Yet the very tools that Trump has used to undo Obama-era protections could come back to haunt him, leaving his own deregulatory accomplishments equally if not more vulnerable to annulment by a future administration.  Presidential elections are tough to call, and Trump has surprised the punditry before.  But with the President currently trailing in the polls, it’s a good time to consider what a loss in November might mean for his rollbacks of signature Obama-era energy and environmental rules including the Clean Power Plan, limits on methane emissions, and car fuel economy standards.

To understand just how vulnerable the President’s regulatory agenda is, one needs first to look at the extent to which Trump has broken precedent in his three and a half years in office.

In the past, presidents relied on a relatively limited set of tools to make their predecessors’ regulatory achievements go away.  One common tool is the “stop-work” order, by which a president instructs an agency head, such as the EPA Administrator, to stop developing a particular regulation championed by the administration that came before.  Where a given regulation has been written but not yet enacted, the EPA can side with naysayers during the required public notice-and-comment period and choose not to put the rule into effect.

“Yet this idea of dismantling the policies of the prior administration has taken much more vehemence in the Trump Administration,” says Richard Revesz, director of the Institute for Policy Integrity at New York University School of Law.  Revesz and colleague Bethany Davis Noll have examined Trump’s unprecedented use of three legal and administrative tools, beyond those just mentioned, to eliminate or replace Obama-era rules.

One of those tools, the Congressional Review Act, drew lots of attention in the early days of Trump’s presidency.  The CRA allows a new administration to cancel regulations finalized in the closing months of a prior presidency.  Trump used the CRA to annul more than a dozen Obama regulations that had been completed in June, 2015 or later, including requirements that fossil fuel companies disclose payments to foreign countries, and a rule to protect streams from mining pollution.

Yet it seems that making use of the CRA requires a tradeoff that earlier presidents weren’t willing to make.  In fact, Trump’s three immediate predecessors in the White House, from Clinton through Obama, used the tool a total of once.

The CRA is powerful because it eliminates the requirement for a 60-vote majority to override a filibuster in the Senate, making it possible for rules to be rolled back with only a simple majority in the Senate (and House).  In 2016 Trump enjoyed Republican majorities in both parts of Congress.

Yet the CRA can only be used during the first 60 legislative days under a new president, so that president has a decision to make: Ask the Senate to occupy its limited band width in rolling back regulations, or instead focus on approving some of the more than 1,200 presidential appointees that require its blessing at the start of a new administration.  Trump, who arrived unprepared for the presidency and with little need for appointees to develop and implement his own policy, teamed with Mitch McConnell to pick the easy political fruit of regulatory destruction.

Theoretically, any regulation the current administration finalizes between now and January could be undone by a new president wielding the CRA, assuming he or she enjoys a friendly majority throughout Congress.  And here is where Trump, by setting a precedent for aggressive use of the CRA, may have invited a future Democratic president to do the same.

“The EPA is planning to rewrite rules that limit methane emissions at new oil and gas facilities, they’re apparently pending”, says Davis Noll, Litigation Director at the Institute for Policy Integrity.  “Any rewrites of EPA’s methane rules will be at risk.”

Obviously, Trump has targeted a much larger number of Obama-era regulations that weren’t vulnerable to the CRA.  In a number of cases where a rule had already been finalized, Trump elected to defer the rule’s compliance date or effective date, a process known as a regulatory suspension.  Where Trump has broken precedent is in suspending rules that had gone into effect.

But perhaps most dramatic has been Trump’s use of a legal process known as an abeyance, which is a request that a court stop work on a given case for a period of time.  An administration may request an abeyance when a rule that it no longer supports is undergoing legal challenge.  In theory, abeyances prevent courts from wasting time in hearing such cases, and abeyances are therefore generally requested, and granted, before the court has spent time hearing oral arguments.

The Department of Justice used an abeyance to most dramatic effect to buy time to repeal Obama’s signature climate regulation, the Clean Power Plan, and eventually replace it with a much watered-down regulation known as the Affordable Clean Energy (ACE) rule.  In fact, the Supreme Court had issued a stay of the Clean Power Plan, itself an act without precedent, until the D.C. Court of Appeals could first rule on the plan.

“For whatever reason, the court actually did grant the abeyance, and then kept the case in abeyance for years while the Trump administration tried to figure out what to do,” says Revesz.

Yet Trump’s Clean Power replacement will itself surely be challenged in court, after his first term is complete, and possibly when a new administration will have taken his place.  Other contentious Trump-era deregulatory efforts, including his replacement for Obama’s 2012 fuel efficiency standards, the delusively named SAFE Vehicles Rule, will all face the same fate.

Revesz offers a word of caution for any future administration, however, noting that Trump has been losing at a rate of 90% where his rollbacks have been challenged in court, or where the administration has pulled back when being sued, as a result of sloppy legal work.