During Wednesday’s White House briefing, President Trump said he “strongly” disagrees with Republican Georgia Governor Brian Kemp on reopening some businesses in his state, a day after praising him and less than a week after encouraging residents in Michigan, Minnesota and Virginia to “liberate” from stay-at-home orders. 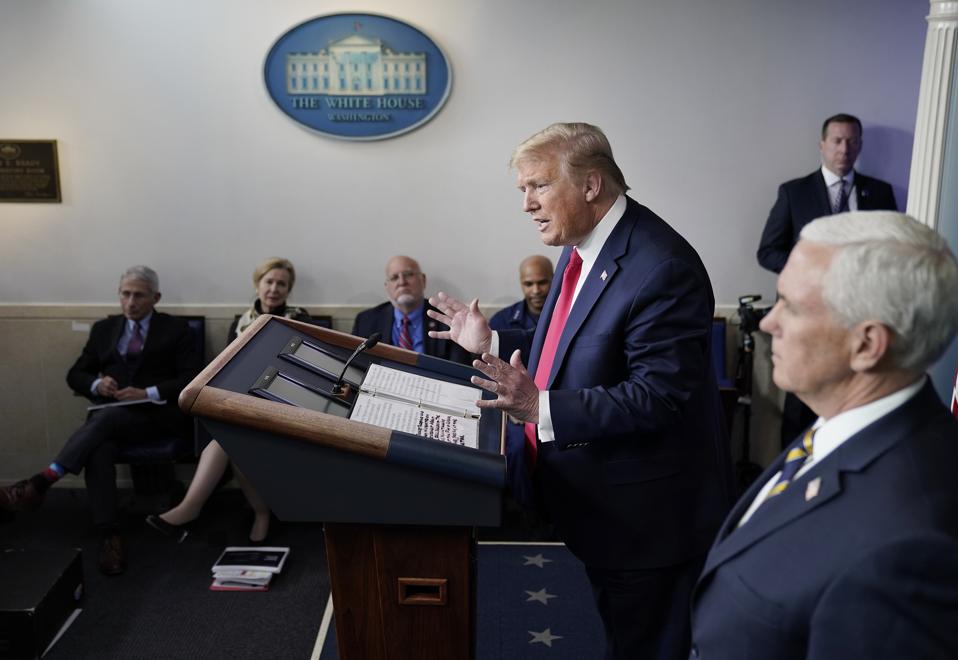 WASHINGTON, DC – APRIL 22: U.S. President Donald Trump speaks during the daily briefing of the … [+] coronavirus task force at the White House on April 22, 2020 in Washington, DC. Dr. Robert Redfield, director of the Centers for Disease Control, has said that a potential second wave of coronavirus later this year could flare up again and coincide with flu season. (Photo by Drew Angerer/Getty Images)

Georgia is set to ease restrictions on businesses like gyms, hair salons and barber shops on Friday, April 24, despite not meeting the White House’s guidelines which call for a 14-day period of declining cases and despite having the 7th-lowest testing rate among states.

“I think it’s too soon,” Trump said. “But at the same time, he must do what he thinks is right.”

Kemp responded on Twitter, saying “I appreciate his bold leadership and insight…we will continue with this approach to protect lives—and livelihoods—of all Georgians.”

On Tuesday, when asked about Kemp’s plan, Trump said “He’s a very capable man, he knows what he’s doing.”

Less than a week ago, Trump began encouraging fringe far-right gatherings protesting stay-at-home orders in three Democratic-led states despite those state’s not meeting the criteria of the guidelines either.

Dr. Anthony Fauci, the top infectious disease doctor in the country, added “I would advise him not to just turn the switch on and go because there is a danger of a rebound.”

87%. That’s how many people support existing social distancing restrictions, according to a new poll conducted by the Associated Press-NORC Center for Public Affairs Research.

Trump has been adamant about easing social distancing measures to help with the battered economy. But following the release of guidelines, governors like New York’s Andrew Cuomo requested help from the federal government to better implement testing and contact tracing in their states on the path to reopening. The stopgap stimulus plan that was passed on Tuesday in the Senate includes $25 billion for national coronavirus testing, $11 billion of which will go to states. Researchers at Harvard estimated that the number of tests performed needs to be tripled before safely reopening.

Georgia has the 12th highest cases of the coronavirus in the United States with 20,740. The U.S. leads the world in confirmed cases of coronavirus and reported deaths with 837,947 and 46,497 respectively.

No, You Won’t Lose All Of Your Social Security Benefits

Which Of The Top AI Events Is Best...