Breaking
2021 CES Consumer Storage
Senator Marco Rubio Called Out Twitter For Its...
The False Narrative Of Bitcoin’s Role In Illicit...
Leading By Example Into The New Year
Why Ethereum Has Hit An All-Time High As...
How You Leave Will Shape Your Legacy
The Next Evolution Of Digital Mental Health Support
Paizo And Pinnacle Team Up For Savage Pathfinder
Mammoth U.S. Borrowing Needs Meet Lower Foreign Participation,...
This Leader’s Work To End The Organ Donation...
SAP BrandVoice: Re-Thinking Tax Reporting And Collection In...
What ‘Backs’ The Dollar? Easy: Production
How To Create A Bulletproof Patent
Here’s The Same Financial Advice Given To Mike...
Consumer Health And Wellness Needs Bring New Challenges...
The (Not So) Secret Science Of Whiskey Value...
Home Business Trump Says He’s Pushing Blue States To Reopen, Claims They’re Delaying To Hurt Him
Business

President Trump on Tuesday said he is pushing states controlled by Democrats to reopen at a more rapid pace, claiming that they are drawing out their coronavirus lockdowns to damage him politically. 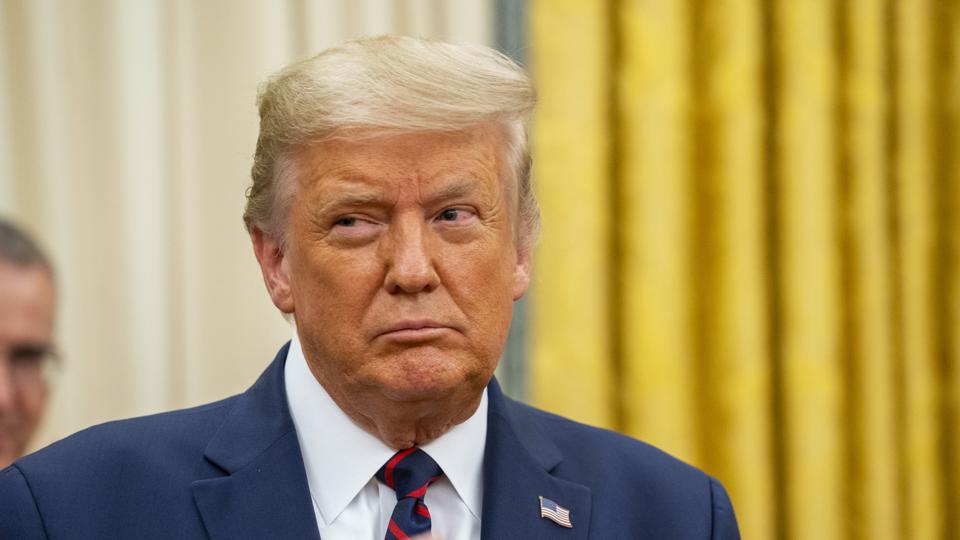 WASHINGTON, DC – AUGUST 04: U.S. President Donald Trump participates in the swearing in of General … [+] Charles Q. Brown as the incoming Chief of Staff of the Air Force, in the Oval Office of the White House, August 4, 2020 in Washington, DC. (Photo by Doug Mills-Pool/Getty Images)

In an interview with Fox Business host Lou Dobbs, Trump expressed confidence about the U.S. coronavirus response, claiming, “We understand the disease. We understand the problems with elderly, especially elderly with heart or diabetes or other problems,” and declaring “we’re not shutting down.”

“We are opening the economy very rapidly,” Trump said, adding “frankly some of the blue states we wish they’d do it and they’d do it fast. We’re asking them to do it. They like to keep it closed.”

Trump quipped that those states would draw out their lockdowns until November 4 – the date of the election – to damage him politically, a message his campaign has frequently pushed alongside the assertion that Democrats seek to keep the nation’s economy closed indefinitely.

“There’s a lot of politics involved in some of these states that are closed,” Trump added.

Though Trump altered his tone on the virus for a brief time in July, saying “it will probably get worse before it gets better,” he has since largely reversed course and shifted back to his typically optimistic outlook. When confronted by Axios reporter Jonathan Swan with the fact that 1,000 Americans were dying a day, Trump responded, “They are dying, that’s true. It is what it is,” adding “It’s under control as much as you can control it.”

60%. Most voters don’t share Trump’s urge to hastily reopen the country. In an NBC poll of over 47,000 voters released Tuesday, 60% said reopening businesses too quickly is a greater concern, while 36% said they are more worried about reopening too slowly. Some 66% of independent voters said they are more concerned about reopening too quickly but just 31% of Republican voters said the same.

Despite Trump’s suggestion that blue states are reopening slower than their Republican-leaning counterparts, there is no clear partisan pattern in how fast states are reopening. According to the New York Times, several overwhelmingly Democratic states including New York, Massachusetts and Vermont are currently in the process of reopening as of Tuesday. Kentucky and Louisiana, two of the states Trump won by the widest margins in 2016, are reversing their reopenings in the face of rising case numbers, while other deep red states like Arkansas, Mississippi and Alabama have paused their reopenings.

How to Make a Scalable SMS Chatbot Using Twilio, Python, and Google Sheets (with Free Code)

Are You Saving Too Much For Your Kids’...