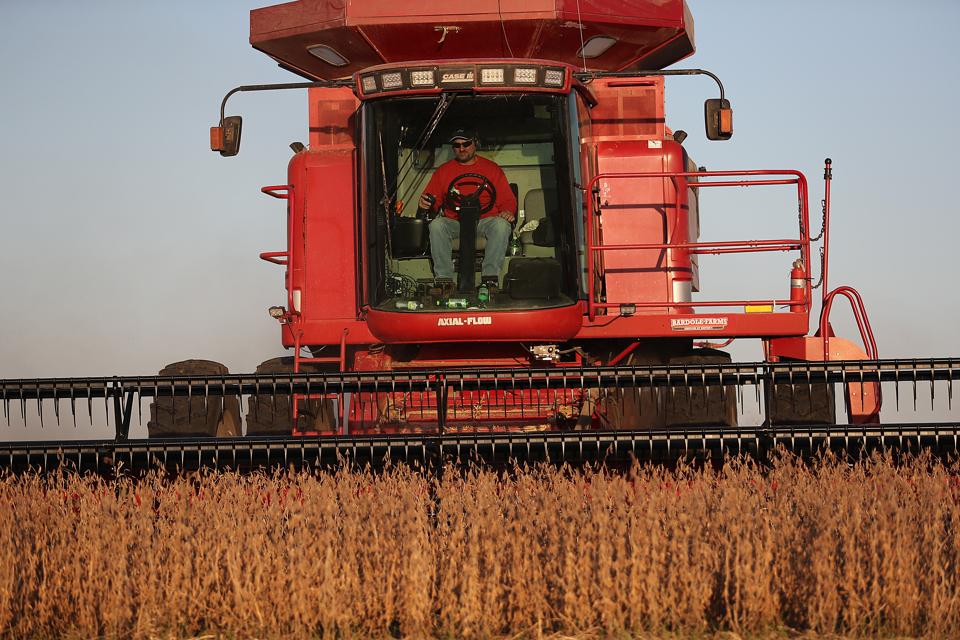 The Trump administration gave more taxpayer dollars to farmers harmed by the administration’s trade policies than the federal government spends each year building ships for the Navy or maintaining America’s nuclear arsenal, according to a new report. A National Foundation for American Policy analysis concluded the spending on farmers was also higher than the annual budgets of several government agencies. “The amount of money raises questions about the strategy of imposing tariffs and permitting the use of taxpayer money to shield policymakers from the consequences of their actions,” according to the analysis.

After a series of tariff increases on Chinese imports, the government of China retaliated against U.S. exporters, as predicted by trade analysts outside of the administration. As a result, U.S. exports, particularly of agricultural goods, dropped significantly. “Losing the world’s most populous country as an export market has been a major blow to the [U.S.] agriculture industry,” reported the New York Times in August 2019. “Total American agricultural exports to China were $24 billion in 2014 and fell to $9.1 billion last year, according to the American Farm Bureau.” In 2018, U.S. farmers’ soybean exports to China declined by 75%, according to the U.S. International Trade Commission.

To shore up political support from farmers, Donald Trump approved increasing amounts of government aid to farmers harmed by the trade policies that the Trump administration itself initiated. Trump was open about the purpose of the payments. “I sometimes see where these horrible dishonest reporters will say that ‘oh jeez, the farmers are upset,’” he told attendees of an Illinois farmer show in August 2019. “Well, they can’t be too upset, because I gave them $12 billion and I gave them $16 billion this year. . . . I hope you like me even better than you did in ’16.”

Utilizing a type of all-purpose fund to help supporters was easy to do because of the loose legal justifications required by the Department of Agriculture to spend funds authorized for the Commodity Credit Corporation (CCC). “The Charter Act . . . grants the Secretary of Agriculture broad powers and discretion in the use of the CCC,” according to a report from the Congressional Research Service. “These broad authorities that Congress has granted to CCC allow it to carry out almost any operation that is consistent with the objective of supporting U.S. agriculture. . . . Recent congressional action restoring CCC’s authority have allowed for the Trump Administration’s use of CCC to mitigate commodity price declines from retaliatory tariffs on a variety of U.S. agricultural products.”

Using the Commodity Credit Corporation to pay farmers for losses incurred by administration trade policy raised legal issues within the Trump administration. “Senior government officials, including some in the White House, privately expressed concern that the Trump administration’s nearly $30 billion bailout for farmers needed stronger legal backing,” reported the Washington Post. Two Agriculture Department officials told the newspaper they were concerned the bailouts went beyond the “original intent of the New Deal-era” Commodity Credit Corporation. Office of Management and Budget (OMB) officials “also raised questions about the scope of $16 billion in a second round of bailout funds [and] pushed the Agriculture Department to provide more legal reasoning for the effort.”

Despite these concerns, the administration has boasted about the taxpayer money given to farmers. “The Trump administration has authorized a total of $28 billion in aid for farmers who have been subjected to unfair trade practices,” stated a December 31, 2019, White House fact sheet on the president’s first three years in office.

The $28 billion the Trump administration authorized to pay farmers as a result of miscalculating that other countries would retaliate against its trade actions, thereby costing farmers billions of dollars in lost sales, is a lot of money, even by the standards of the federal government.

Below is a comparison of how the $28 billion in authorized payments to farmers compares to other federal expenditures.

The Department of Defense spent an estimated $21.8 billion in FY 2019 for “nuclear delivery systems and weapons,” including ballistic missile submarines, intercontinental ballistic missiles and bombers, as well as for command, control, communications and early-warning systems, according to the Congressional Budget Office.

The Navy estimates it would cost an average of $22 billion per year for new “new-ship construction” over the next three decades, including 247 combat ships and 57 support ships.

The federal program for children’s health insurance cost $17.3 billion in FY 2018, according to OMB.

The annual budgets in the Department of Agriculture for the Food Safety and Inspection Service ($1.3 billion), the Agricultural Research Service ($1.1 billion) and the Forest Service (0.4 billion) in FY 2018 were only spare change compared to the $28 billion paid to farmers.

The 2018 expenditures for the legislative branch and the judicial branch were $4.7 billion and $7.8 billion (respectively).

Finally, the cost of running several government departments and agencies is lower than the $28 billion authorized for farmers. The Department of State budget in FY 2018 was $26.8 billion. NASA’s budget was $19.8 billion. The Department of Commerce ($8.6 billion), the Environmental Protection Agency ($8.1 billion) and the National Science Foundation ($7.2 billion) all had relatively low 2018 budgets compared to the administration’s payments to farmers.

Did this turn out well for farmers? Experts say probably not. “Farmers would have been better off if the trade war had never started, to say nothing of the American businesses and consumers who continue to pay exorbitant tariffs, even after the ‘Phase 1’ U.S.-China trade deal,” said Bryan Riley, director of the National Taxpayers Union’s Free Trade Initiative, in an interview. “All the warnings issued by economists about the trade war, including higher costs for U.S. consumers, trade retaliation and heightened global tensions, have come true.”

While China agreed to purchase more agricultural goods in a U.S.-China deal signed on January 15, 2020, it is unlikely the new trade deal will make up for losses farmers already have incurred. It is also unclear if the sales envisioned in the agreement will be realized or constitute a good economic policy.

“If the commitments actually happen, they’d signify a strange turn of events,” writes Washington Post columnist Catherine Rampell. “For years, a core U.S. objective was to get the Chinese economy to become more market-oriented and less centrally planned. Now, Trump has demanded that China commit to huge new centrally planned purchases of soybeans, pork and other American goods, regardless of what market demand requires.”

Todd Hultman, lead analyst at DTN, a news and analysis company that tracks agriculture, questions the math behind the U.S.-China deal. The agreement calls for “additional U.S. exports [of agricultural products] to China on top of 2017 baseline” of $12.5 billion in 2020 and $19.5 billion in 2021. (The 2017 baseline is $24 billion.) Hultman points out that in 2017 soybeans made up 51% of China’s purchases of U.S. agricultural products and doesn’t believe U.S. farmers can supply enough soybeans to make the math on the deal work based on recent prices. “As you may have guessed, the number is outrageous,” he writes.

The agreement allows China to purchase agricultural goods, including from other countries, “at market prices based on commercial considerations.” What does that mean? “On one hand, we have a trade agreement that appears to be so bullish it could severely distort the markets,” notes Hultman. “On the other hand, China may have agreed to nothing more than a decision to act in their own self-interest.”

In an interview, Hultman added, “I can’t say what China is feeling, but knowing that they were extremely reluctant to commit to a fixed number in negotiations – especially numbers as high as these that they have to suspect are market-distorting – I would say they must have gotten some confidence from negotiators and this wording that they won’t be forced to buy [for example] $20 soybeans, while Brazil sits on a big surplus.”

Companies in other sectors, such as manufacturers and retailers, received no bailouts. Moreover, despite the U.S.-China deal, many tariffs were not removed and will continue to harm U.S. businesses and consumers. A National Foundation for American Policy analysis found the tariffs were on pace to eliminate potentially all of the economic benefits the Trump administration has claimed from its deregulation efforts.

We should also not forget the additional government (and deficit) spending represented by the $28 billion spent on farmers. “Since the two trade aid packages were undertaken using CCC’s [Commodity Credit Corporation’s] discretionary authority, no congressional budget offset was required, and administrative PAYGO [the pay as you go budget rule] was not raised,” according to the Congressional Research Service. “The corporation’s permanent, indefinite funding authority means that trade aid expenditures are reimbursed annually as a net realized loss, thus increasing total federal spending.”

In sum, to cover for its own trade policy mistake of raising tariffs the Trump administration paid farmers more than America spends each year to maintain its nuclear forces and many government agencies. Observers note this has not proven to be a good deal for farmers, manufacturers or U.S. taxpayers.

Is ‘Call Of Duty’ Down? Gamers Are Reporting Connection And Server Issues

What’s In A Name? The Politics Behind America’s Newest Aircraft Carrier

Is Progress In Autonomous Technology Gated By Research...

Reinstating The Crude Export Ban Would Be A...

The Minnesota Timberwolves Have All The Leverage In...

The Celtics’ Bench Is Officially A Problem

Why A Cardiologist Became A ‘Food-As-Medicine’ Entrepreneur