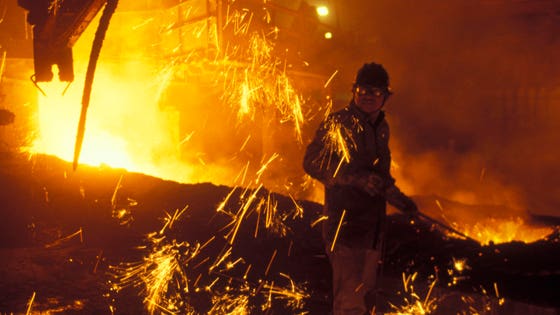 President Trump celebrated Cyber Monday by going online to renege on a trade deal. In the spring of 2018, the Trump administration had reached agreements with Argentina and Brazil to suspend U.S. national security tariffs if those countries would impose quotas on their own exports. The South Americans dutifully limited their shipments; President Trump just tweeted the reimposition of 25% tariffs.

The President did not claim that the two countries had exceeded their quotas. Instead, he wrote: “Brazil and Argentina have been presiding over a massive devaluation of their currencies. which is not good for our farmers.” This leaves plenty to unpack, so here are some interesting aspects of the Monday morning move:

1.  Economic Impact is the Least of It.  While Brazil is a significant supplier of steel to the United States, accounting for roughly 12% of U.S imports,  it had already limited its exports under the previous deal. Argentina accounts for roughly 0.5% of U.S. imports. There can be a rough equivalence between restricting supply via tariffs and restricting the same supply via quotas, at least when one looks at the impact on prices in the U.S. market. The two approaches are not equivalent from the perspective of the Brazilians, who would do better under a self-imposed export restraint. The most likely economic impact would therefore come through any retaliation.

2. Trade War Taking a Toll. So, if this won’t do much to U.S. steel prices and Argentina is not a significant steel exporter, what’s the point? The President clarified with his reference to farmers. When U.S. agricultural exports became a casualty of the President’s trade war with China, the Chinese increased imports from South America. Lest the resulting economic pain for American farmers turn into political pain for the President, he was looking to take action.

3.  Doubling Down, Blame the Fed. One possible strategy for the President, heading into the election of 2020, would have been to pull back from his attacks on trade. The economic costs are mounting and the President’s economic record is at the center of his campaign. The push for a “Phase One” China deal seemed to be a part of this pivot. But today’s move on South America suggests a different strategy: double down on protection and blame the Federal Reserve for any economic troubles. Currency issues tie directly to monetary policy – the domain of the Fed. To remove any doubt about the linkage, the President concluded his pair of tweets with: “Lower Rates & Loosen – Fed!”

4. The Coming Apart of the Deal. President Trump has long shown disdain for trade deals that were struck by his predecessors, such as NAFTA or the WTO. This is the second major instance this year in which President Trump has blatantly disregarded a trade deal struck on his watch. Back in April, after the President’s team had concluded and signed the USMCA to replace NAFTA, the President threatened Mexico with 25% tariffs in response to its immigration policies. He said those tariffs would “supersede” USMCA limitations. Now, there is the reversal of the South American steel deal, also because a new issue has aggravated the President. The lesson to any country trying to strike a deal with the Trump administration (China, Japan, the European Union) is that deals will last only as long as they are convenient for President Trump. That will necessarily limit the types of deals other countries will be willing to make.

5. Currency Policy is Tricky. As if U.S. international economic policy were not tangled enough, we now introduce the question of appropriate and inappropriate currency policy. The difficulty is that, while currency moves have important effects on trade flows, they are heavily determined by monetary policy and economic growth. When a central bank lowers interest rates, currencies tend to depreciate. Slow-growing economies tend to have lower interest rates and weaker currencies. Unlike with tariffs, there are rarely bright lines showing currency misbehavior. There is little to suggest malfeasance on the part of Brazil and Argentina; in fact, Brazil just intervened in currency markets to prop up its currency.

6. Hard to Justify. President Trump’s steel tariffs were imposed last year under a provision of trade law allowing for measures to bolster national security. The link between those tariffs and national security was always tenuous, but in the most recent instance, the President seemed to abandon the link altogether – he declared this to be about currency irritation. Until recently, some analysts were dismissive of such legal technicalities. After all, was a court really going to constrain the President when he claimed to be pursuing national security interests? Actually, in mid-November, the U.S. Court of International Trade did say there were important limits on presidential powers in this area. That precedent led one prominent legal analyst to declare that the President’s move against Brazil and Argentina is illegal.

The President’s cyber sally south of the border is a slap for those seeking a trade war cessation. The effect is more symbolic than economic. It portends new fronts on the trade war, both geographically and topically, while undermining the U.S. credibility necessary to make lasting deals to achieve trade peace.

Building a Fanocracy Around Your Business

Five Strange Things You Need To Know About...

Golf Sticks To Social Media Though COVID-19 May...

A Public Company CEO In The Making