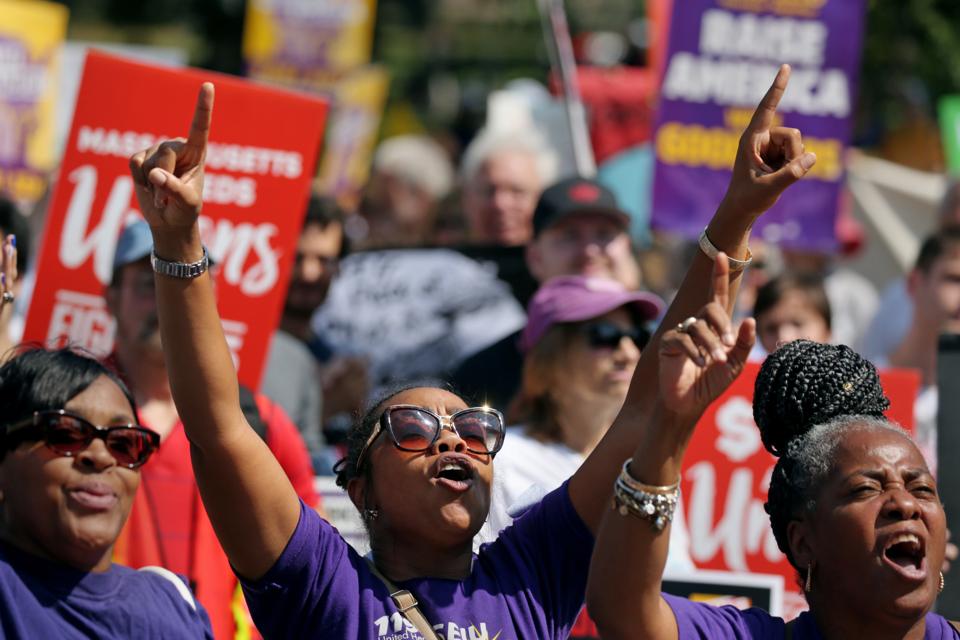 With record-setting stock prices and continuing low unemployment (3.6% in January), President Trump is boasting that the economy is doing great, and many commentators are repeating his claim. After the January employment report, New York Times columnist Neil Irwin wrote that “the data on the economy are giving him something genuinely worth boasting about.”

But even Trump’s own Treasury Secretary Steven Mnuchin says that Trump’s target of 3% GDP growth is too optimistic. Investors, analysts, business planners, workers and voters need to take a closer look to see signs of economic weaknesses. Nicholas Kristof in the New York Times recognizes these weaknesses, citing a “hidden depression” representing “symptoms of a larger economic malaise.”

Let’s take employment. The Labor Department reported businesses created 225,000 new jobs in January. The number of jobs has risen each year under Trump, but less than they did under President Obama. Forbes commentator Chuck Jones points out that 1.5 million more jobs were created during Obama’s last three years in office than in Trump’s three years.

What kind of jobs are being created? The President touts a “blue-collar boom,” but the January report saw a slight drop in manufacturing jobs, especially in motor vehicles and parts. Janitorial and security guard jobs are up. Employment gains are more pink- than blue-collar, taking place in service sectors where more women work: education, health and home care, social services and food services. Those jobs are lower-paying than manufacturing or other male-dominated professions.

But aren’t wages going up, especially for the lowest-paid workers? Yes, but low wages are not going up entirely because of the market. With historically low unemployment, average hourly earnings rose last year by only 3.1%, and the total employment cost index (which includes both wages and benefits) rose by 2.7%, less than 2018’s increase. And measuring income by hourly wage growth makes things look better than they are. Hours worked per week are falling, so weekly earnings have not increased as much. The gains for the lowest wage workers, whose wages are going up faster, are driven in part by state and local increases in the minimum wage, not market effects.

The problems of low-wage workers cast another cloud on the economy’s performance. A Brookings Institution report found that low-wage earners—those who earn two-thirds median wage in the region—make up over 53 million workers or 44% of all workers ages 18 to 64. More than 40% are raising children, and over half are in their prime working years.

And low-wage workers are unsettled and insecure. Another Brookings report, based on extensive interviews, found that “despite the rosy headlines, workers described feeling uncertain and uneasy about their future.” They live paycheck to paycheck, have inadequate or no health insurance, can’t see how their children could afford college, lack access to retirement plans and in many regions have trouble finding affordable housing.

Even with low unemployment, low-wage workers are suffering what journalist Annie Lowery calls the Great Affordability Crisis: “Fully one in three households is classified as financially fragile,” lacking even $400 in emergency savings, so that a surprise furnace-repair bill, parking ticket, court fee or medical expense remains ruinous for so many American families, despite all the wealth this country has generated.

So yes, we have a booming stock market. But the stock market barely touches the lives of most Americans. For workers nearing retirement, median retirement wealth is only $15,000—most of their wealth is in their Social Security benefits and their homes. Unemployment hovers around a 50-year low, but many Americans don’t feel economically secure, and they shouldn’t. A low-wage economy continues creating more “lousy jobs”—as my colleague David Howell has documented—is not any sort of boom, nor a triumph for economically insecure Americans.

Deep Learning Has Limits. But Its Commercial Impact Has Just Begun.

Economic Forecasting In The Age Of Coronavirus —...