Breaking
Expanding Your Business Into Spain: What You Need...
Essentials For Your Office Coming Out Of COVID-19
What Can Marketers Learn From Digital Cults?
Why NASA’s James Webb Space Telescope Will Never...
Increasing HR Effectivity and Efficiency through Software Solutions
The Difference Between Building A Startup In Bull...
Fluor Corp Ranked Among Today’s Top Shorts
Common Pitfalls to Look Out for When Buying...
Will the Olympics go ahead this year?
Pack Up the Big Top: Insights from MozCon...
Best WordPress Themes for Blogs
Get Ready To Rip And Tear, As The...
As Economy Recovers, Loan Approval Rates Increase For...
Lessons Learned—Avoiding The Fundraising Errors That Can Sink...
Top Tips to Help You Effectively Manage Your...
Malaysia’s Carsome, Tycoon Patrick Grove’s Catcha Group To...
Home Technology Twitter’s Stock May Plunge By 9% Following Quarterly Results
Technology

Twitter Inc.’s (TWTR)  stock has rebounded by around 12% since the middle of November, but that may be about to end after the social media company reports quarterly results. Options traders appear to be betting that the stock price declines by as much as 9% following those quarterly results. Meanwhile, the technical chart is flashing some ominous signs.

Earnings are forecast to be very weak when the company reports results on February 6, declining by almost 12%. Meanwhile, revenue is estimated to have increased by nearly 10%. The company saw operating expenses soar in the third quarter as it ramped up its headcount and R&D

Betting On A Sharp Drop

Traders have been betting that Twitter’s stock falls following its quarterly results. The open interest for February 7, 2020, $30.5 puts rose by almost 6,100 contracts on January 27. According to data from Trade Alert, these puts traded on the ASK for about $0.67 per contract on January 24. It would indicate that a trader is betting that Twitter’s stock falls below $29.80 by the expiration date. It would be equal to a decline of roughly 9% from its current price of $32.75 on January 27. 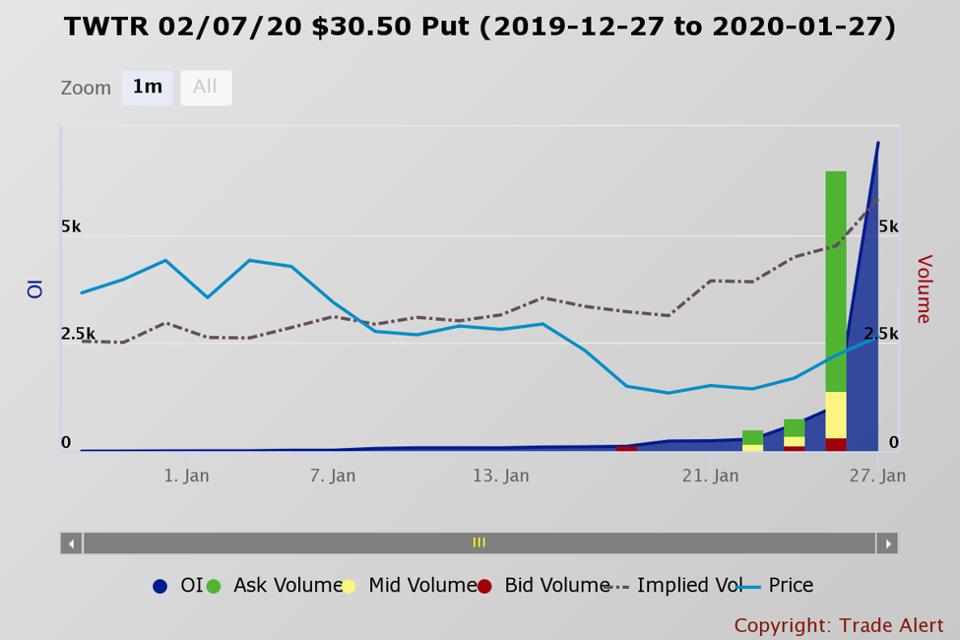 Momentum May Be Shifting

The chart shows that the stock is currently resting on a technical uptrend, and should it fall below that trend line, it is likely to trigger a sharp move lower. The next significant level of support for the stock would not come until $29.70. Additionally, the relative strength index, a momentum indicator, has broken an uptrend too. It would suggest that momentum in the equity is beginning to shift, from bullish to bearish. 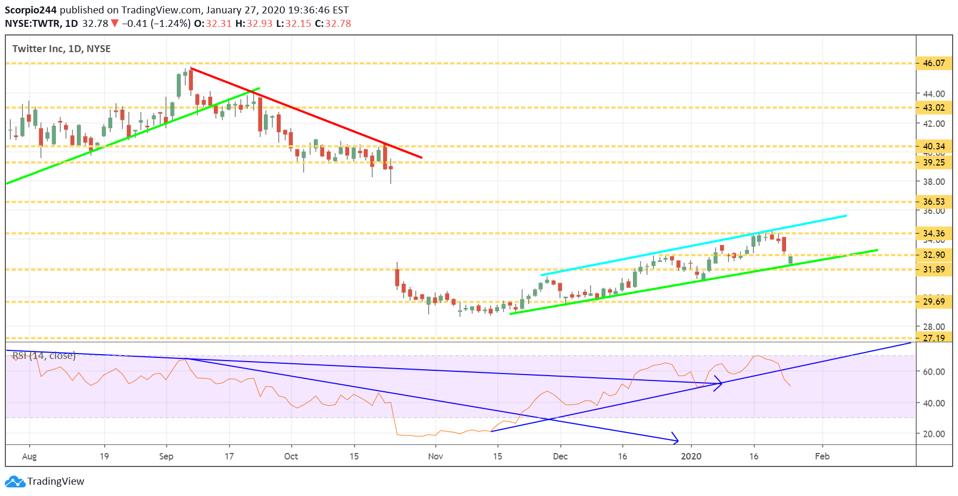 The company will try to turn things around when it reports its fourth quarter results. The third quarter was a major disappointment for investors after missing revenue estimates by almost 6% at $823.7 million, versus estimates of $875.2 million.  The company blamed the revenue miss on product issues and greater-than-expected advertising seasonality in July and August. The disappointing revenue came as a shock to investors, as it was the first time the company missed estimates in seven quarters. As a result, the stock plunged by almost 21%. 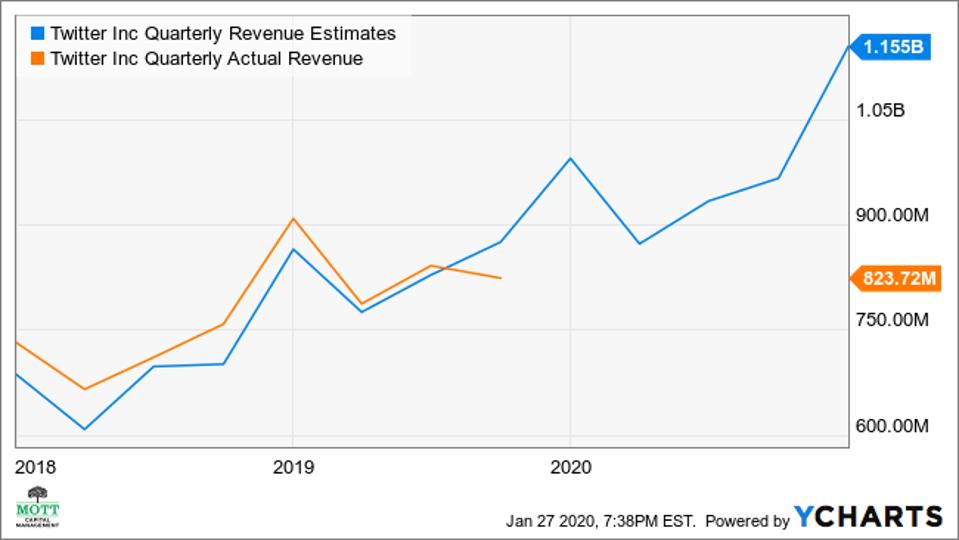 Meanwhile, fourth quarter earnings are estimated at $0.27 per share and have been trending lower since July. Except for the last quarter, the company has either met or beaten analysts’ earnings estimates seven quarters in a row.

The company did drive strong monetizable Daily Active Usage (mDAU) growth of 17% in the third quarter to 145 million versus 124 million in the same period a year ago, and up from 139 million sequentially. Over the last few quarters, Twitter has driven strong growth in this segment, mostly from international subscribers, which increased by 18% in the third quarter to 115 million from 98 million a year earlier. Growth in the US has been slower but is showing some signs of acceleration, with subscriber growth rising by 8%, 10%, and 13% in each of the last three quarters on a year-over-year basis, respectively.

Twitter will have a lot to prove this quarter to get investors excited about the stock again after last quarters’ big disappointment. Anything less could result in the shares moving sharply lower, yet again.

Mott Capital Management, LLC is a registered investment adviser. Information presented is for educational purposes only and does not intend to make an offer or solicitation for the sale or purchase of any specific securities, investments, or investment strategies. Investments involve risk and unless otherwise stated, are not guaranteed. Be sure to first consult with a qualified financial adviser and/or tax professional before implementing any strategy discussed herein. Past performance is not indicative of future results.