Breaking
Everything You Need to Know About Corporate Social...
Is Adaptive Leadership the Key to Motivating Employees?
Why business events are set to return with...
Business events set to return with a bang!
Expanding Internationally: 5 Things to Consider for eCommerce...
How the Machine Shop Is Going Digital in...
Sustainable Food Packaging Is Helping the Hospitality Sector...
Top 5 Investment Practices To Make More Money...
Managing IT Requirements for SMEs: 5 Aspects that...
How To Build a Successful Luxury Brand In...
Finding The Best Google AdWords Consultant for Your...
8 Top Tips To Help Your Agricultural Business...
Three Reasons Why Office Décor and Design Are...
Looking To Improve Efficiency In Your Business? Here’s...
AI and machine learning for business
How Social Media Changed the World
Home Business Two Monsters: Flooding And COVID-19 In North Dakota
Business 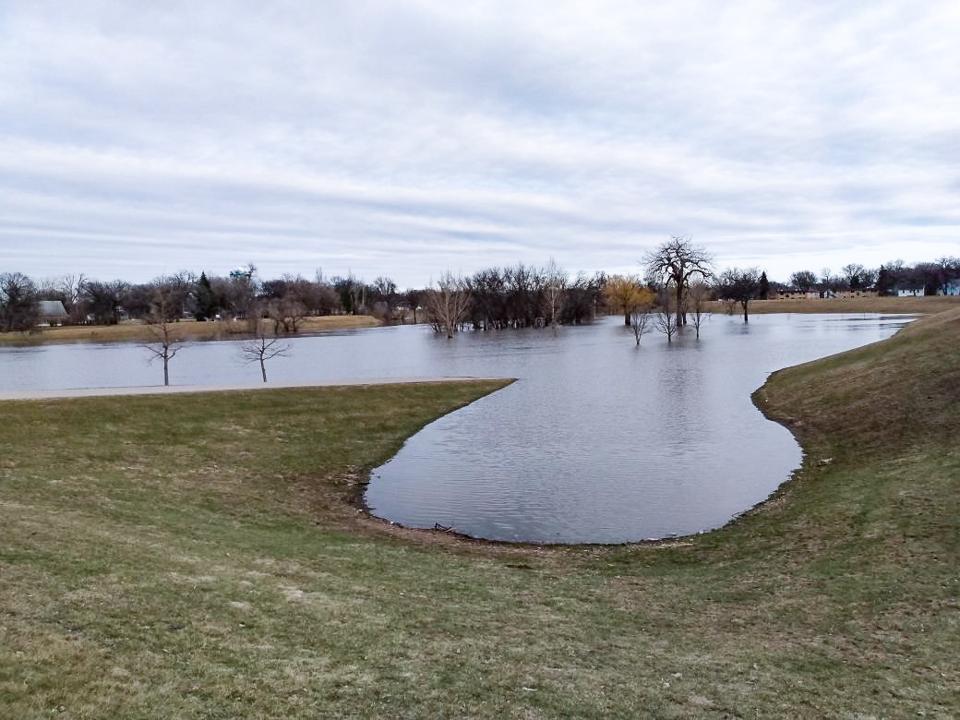 Pictured on April 10, the Red River in downtown Fargo, North Dakota, surged beyond its banks.

As I write this on the Saturday afternoon before Easter, in a time of a coronavirus pandemic, water flows over dirt roads and an interstate snaking to the Canadian border; it laps around the properties of some North Dakotans; it seeps into the basements of others.

In North Dakota, one of the Midwest’s flyover states, where fewer than a million people live, spring means flooding.

The Missouri River, which meanders by the capital of Bismarck, floods. So does the Red River, which separates North Dakota and its eastern neighbor, Minnesota. The Red passes through some of North Dakota’s most populous regions, including the cities of Fargo and Grand Forks, as it charts its way north through rich farmland, past the Canadian border and into Lake Winnipeg.

For the last three years, my husband and I have lived about five minutes away from the Red, which hurries through a bucolic greenway park in downtown Fargo. When we first settled here, locals warned us of two things – the frigid winters that blanket the ground with snow and the spring thaw that pushes the Red beyond its banks.

The Red spills because its shallow, a mere scratch on a pancake-flat landscape designed by an ancient glacial lake. After half a year of winter, once the snow melts and the frozen soil breaks, the river – and its tributaries – swells as it often jams against still iced patches on its north-bound voyage.

But no other spring flood really compares to the one in 1997, when the Red left its bed with such viciousness that it permanently upended the livelihoods of scores of North Dakotans and Minnesotans. That winter, more than 20 years ago, dumped record levels of snow – nearly 10 feet in Fargo – and rumbled into spring with an April blizzard, which added further precipitation to an already soaked land. 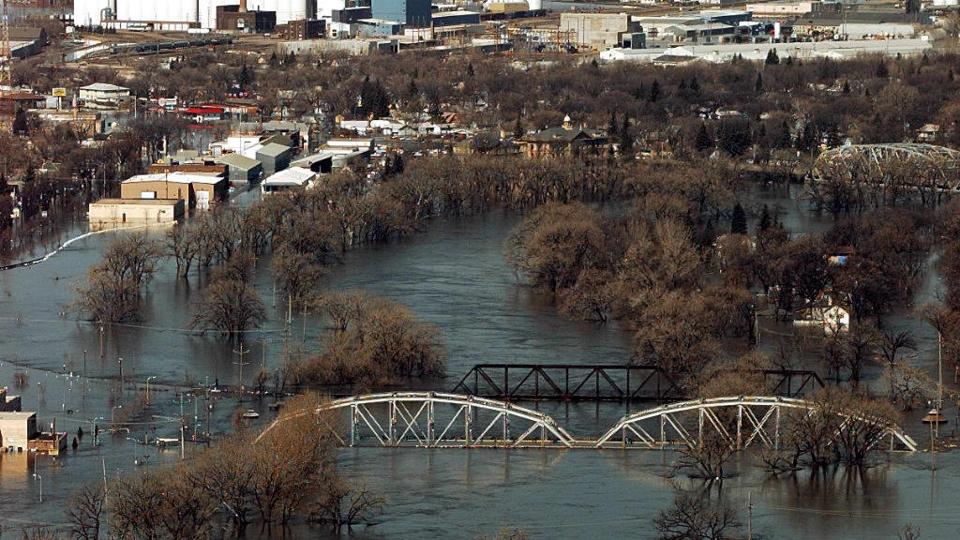 GRAND FORKS, UNITED STATES: Flooding from the Red River in Grand Forks, ND, can be seen in this 22 … [+] April overview. After viewing the flooded town by helicopter, Clinton addressed area residents staying at a nearby air base. Most of the 50,000 residents of Grand Forks have been evacuated from their homes because of the worst flooding this area has ever seen. (ELECTRONIC IMAGE) Stephen JAFFE/lf (Photo credit should read STEPHEN JAFFE/AFP via Getty Images)

Grand Forks and its across-the-border neighbor, East Grand Forks, were inundated, bearing most of the swollen river’s fury along with several smaller towns nearby. Businesses and schools closed; residents fled. At the end, the flood of 1997 displaced over 50,000 citizens and wreaked $5 billion of damages, the Weather Channel reported. Almost 10 years later, in 2009, another big flood swept – this time severely impacting Fargo.

In 2020, another monster roars, perhaps even more thunderous than flooding. It’s the coronavirus, which has resulted in 308 positive cases, 39 hospitalizations and eight deaths in North Dakota as of Easter Saturday. The state, experts predict, is still to reach its peak of infections before it begins to curb the trend. Cass County, where Fargo lies, is the virus’ epicenter in North Dakota.

Only a couple of months ago, though, we were reading for a substantial spring flooding, almost oblivious to COVID-19, which was yet to grip the country.

Early forecasts pinned the flood of 2020 as possibly among the worst five on record. But then, the weather cooperated. Fargo and Cass County reduced in half their joint number of needed sandbags – from 400,000 to 225,000, which volunteers produced by March 13.

The same day President Donald Trump announced a state of emergency due to the spreading coronavirus, which would have made filling sandbags improbable amid social distancing rules.

“Fortunately, we had all of our sandbags built and we were well prepared,” says Cass County Engineer Jason Benson. “Had we not, we would be in a much different situation. So we’re very fortunate.”

And, a possibility existed for an even direr situation. City and county officials considered postponing the sandbag operation until the second half of March – but ultimately decided against it. “It was just good luck that we made that decision ahead of time because when we made the decision, there were some cases of COVID-19 out in Washington State, and there were a handful of cases that had just popped up in New York City,” Benson says.

Still, across North Dakota, crews had to shutter roads at risk of flooding and close gaps in diversion levees, while trying to maintain social distancing. For employees of Grand Forks, where a complete diversion system negates sandbags, that meant completing some tasks more slowly than usual.

“We’ve all had to adjust how we do things,” amid COVID-19, says Bernstrom. “When it may be more efficient to, let’s say, have two crews or three putting [up a closure], we might have one crew of three doing it. It may take them longer but there’s less person-to-person interaction there.”

In Fargo, Division Engineer Nathan Boerboom says single crews have split into smaller groups with different shifts. “That way if one member is exposed [to the coronavirus], they don’t lose all their staff,” says Boerboom.

On April 1, snow fell, clouding earlier predictions. Several inches piled along the Red River. Then, they melted rather rapidly, faster than expected. The Red crested in the first week of April – and again in the past couple of days.

On Saturday, in Fargo, the Red stood at 27.6 feet, a moderate flood. Up north, in Grand Forks, it was at 47.57 feet or a foot above major flood level, which is likely to be the eight worst on record, according to the Grand Forks Herald.

Rural areas seem to have it worst. Yesterday, a Red’s tributary near Fargo, the Sheyenne River surged to 90.5 feet in the town of Harwood, a foot below its highest level last year and another foot below the 1997 record of 92.02 feet. Earlier in the week, Benson said that up to 25,000 sandbags had already arrived at the properties of rural Harwood citizens.

Cass County sheriff Jesse Jahner took to Facebook on Thursday saying, “I want to thank all of my staff for their hard work, adjustment of schedules over the past week and giving up Easter with their families to assist our citizens during this time. I want to thank our citizens for their partnerships. Finally, I want to thank North Dakota Highway Patrol, NDSU PD and Valley Water and Rescue for volunteering to help supplement our staff.”

An hour or so north of Harwood, along I-29, the water cut off the town of Oslo, Minn, where about 300 people live some three miles east of the interstate. Last week, 20 soldiers from the Minnesota National Guard arrived in Oslo, which often floods in springtime, to monitor levees and support post-flood operations, including rescues. This year, the soldiers also brought COVID-19 protective equipment.

Meanwhile Oslo Mayor Erika Martens said on local television, “With the Guard in here everybody breathes a little sigh of relief. It’s hard to get people out especially with the COVID. Everybody is trying to stay in, we’re not getting the volunteer response that we usually do.”

The damages, physical and otherwise, are still to be assessed. Yet, this year, many North Dakotans (and some of their Minnesota neighbors) lucked out, avoiding at least one monster, the monster they know better. But some are currently still battling two – flooding and COVID-19.

GOOD NEWS: This 17-Year Old’s Nonprofit Is Delivering Food To Boomers In 12 Cities (And He Started 3 Weeks Ago)