Shark scientists rejoice, science has revealed have two new shark species! Meet Kaja’s sixgill sawshark (Pliotrema kajae) and Anna’s sixgill sawshark (P. annae), found off the coasts of Madagascar and Tanzania respectively. The study was led by Dr. Simon Weigmann and involved a collaboration between several research institutions. In the Pristiophoridae family, these new additions published in PLOS One have increased the total number of sawshark species known to 10; previously, only eight species were known. 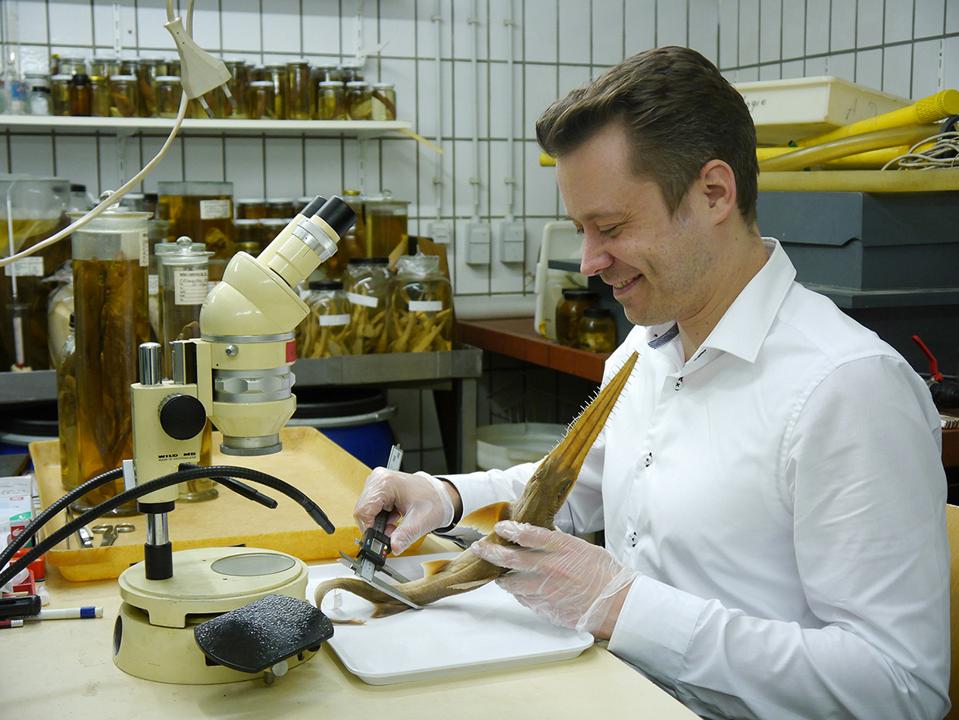 Dr Simon Weigmann holds a holotype of the newly described Kaja’s sixgill sawshark from the MNHN … [+] collection in Paris.

Like many new species identifications, this discovery was uncovered in a museum. The Natural History Museum in London, to be exact! Dr. Ruth Leeney was a Save Our Seas Foundation (SOSF) project leader from 2015 to 2017 and it was during this time period that Leeney came across the first specimens of Kaja’s sixgill sawshark (known in Madagascar as vae vae). She wasn’t actually even looking for sawsharks, but sawfish instead. “I got a report that a fisherman had caught a sawfish, but when the photograph appeared in my e-mail the next day, I could see that it wasn’t a sawfish, but a pair of sawsharks,” remembers Dr Leeney.

Sawsharks are not to be confused with sawfish, since they are distantly related and sawfish are actually a type of ray. But due to their appearance- flattened bottom dwellers with long snouts that resemble chainsaws- they are sometimes confused for one another! A quick way to tell the difference between the two is that sawsharks tend to have a “moustaches,” or barbels on either side of their rostrum that may feel around the sand for their prey. Sawfish also tend to be much bigger than sawsharks; sawfish can reach over 20 feet (6 meters) in length while sawsharks average around 3 ft (1 m). The rostrum is edged with pointy teeth that are believed to be used for both hunting and defense.

“Although it wasn’t the species I was searching for in Madagascar, it wasn’t every day that I had the chance to study these rarely seen sharks,” she continued. The second new species, Anna’s sixgill sawshark, was discovered by scientists who were documenting fish landings on the coast of Zanzibar in Tanzania. At this time, scientists only knew of two sawshark species in East African waters, Warren’s sixgill sawshark and the African dwarf sawshark. Warren’s sixgill sawshark (Pliotrema warreni) was discovered by English zoologist Dr. Ernest Warren who sent the specimen to the Natural History Museum, London (BMNH) in 1906. Meanwhile the African dwarf sawshark (Pristiophorus nancyae) was discovered more recently, in 2011, when one was accidentally caught off the coast of Mozambique at around 1,600 ft (490 m) deep. The scientific name was chosen by researchers at the Pacific Shark Research Center at Moss Landing Marine Laboratories. It was named after one Nancy Packard, who donated generously to organizations keen to study the ocean.

Side view of a juvenile Kaja’s sixgill sawshark, 56 cm in length. The scale bar (black marker on the … [+] image) is 5 cm in length.

The researchers compared the new specimens with those in London’s Natural History Museum as well as several other museums. By comparing detailed measurements of the body and taking high-resolution photographs using a scanning electron microscope, the team was able to confirm that they had indeed discovered two new species! But sawsharks are still a mystery in the shark science world.

While some of these species are used for food (e.g. fish and chips) around the world, not much is known about their overall population health. Of the now 10 species, not even half – in fact, only three – are listed by the International Union for Conservation of Nature (IUCN) as having a stable population trend; scientists simply do not have enough information about the others to determine their conservation status. But some regions of the world, like Australia, allow for these animals to be caught using gillnets, longlines and trawls as they are managed by quotas. Sawsharks reach reproductive maturity at about two years of age and bear live young, giving birth in shallow coastal waters after a 12-month gestation period. Some species segregate according to age, with adults being found in deeper water than juveniles.

Over the past 15 years, the Save the Seas Foundation has supported some 300 projects worldwide, upholding the founder’s pledge to protect the populations of sharks, rays and skates whose presence is essential to the health and biological diversity of our seas. “The work of project leaders like Ruth and her colleagues is critical for achieving this goal. It is remarkable that we are still discovering new species of shark, but the fact that we are doing so through fisheries highlights how quickly we will need to learn if we want to protect these vulnerable animals,” said SOSF CEO Dr James Lea.

Given the global threats facing marine wildlife like sawsharks, it is currently impossible to know how sawsharks will fare. Which is scary, since there is no understanding of how important of a role they play in deep-sea ecosystems. While these new discoveries are exciting, they serve as a reminder that now more than ever conservationists, policy makers, and stakeholders need to work together to protect these vulnerable animals.