Breaking
Zynga Stock Looks Attractive At $9
How Russian Thieves Use Dark Web To Get...
France Off Travel Corridors And FCO Exempt List
Ask Ethan: Why Are The Moon And Sun...
When To See The Moon And The Planets...
IRS-CI Involved In Largest-Ever Seizure Of Terrorist Organizations’...
The Check Really Is In The Mail. After...
Epic Games Vs Apple: Why You Won’t Be...
Senator Kamala Harris Proposed A Bold Tax Credit...
Deal Terms To Reduce The Risk When Buying...
Multiple Sclerosis Drug Shows Promise For HIV Prevention...
The Neglected Piece Of Retirement Planning
It’s No Longer A Viable Option For Capitalism...
Virtual Credit Cards: An Extra Layer Of Protection...
Lessons From The Rainforest: Human Health Leads To...
Four Easy Ways To Bolster Your Company’s Reputation
Home Technology Tylenol Could Have A Cancer Warning In California, Here Are The Issues
Technology

Tylenol Could Have A Cancer Warning In California, Here Are The Issues 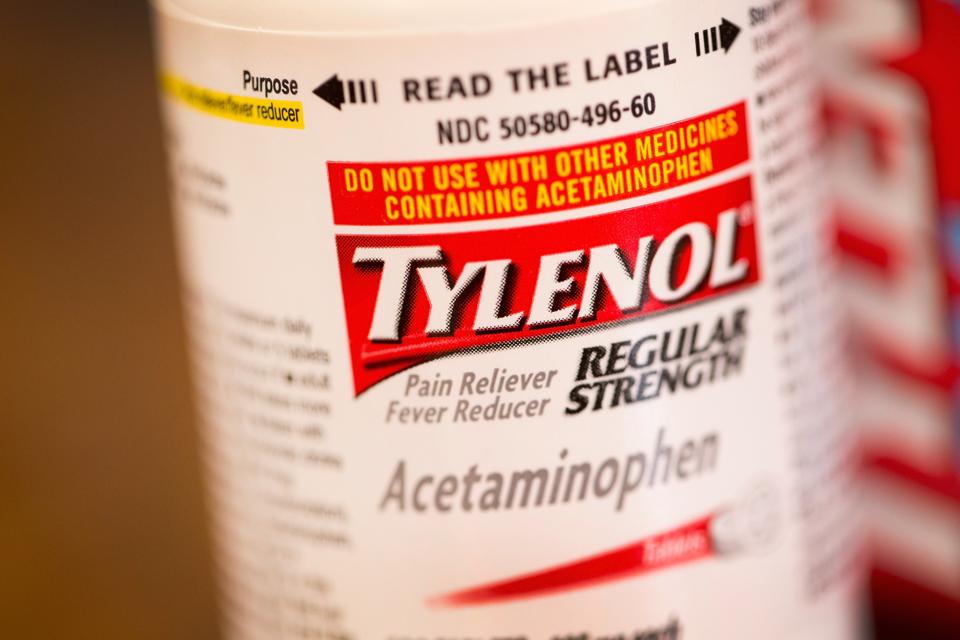 Tylenol is one of many products that contain acetaminophen. (Photo Illustration by Scott Olson/Getty … [+] Images)

Oh, this could cause a headache. This spring, there will be a public hearing to discuss whether acetaminophen should be added to California’s list of chemicals that are “known to the state to cause cancer or reproductive toxicity.” Proposition 65, officially known as the “Safe Drinking Water and Toxic Enforcement Act of 1986”, requires the state to maintain such a list and “businesses to inform Californians about exposures to such chemicals.” So, for example, arsenic, asbestos, cocaine, coke oven emissions, and wood dust are already on this list of 900 some chemicals. Therefore, if you’re trying to sell hamburgers that may have some cocaine and wood dust in them, you had better tell everyone.

Adding acetaminophen to this list may not seem like a big deal if you don’t see-what-a-fin acetaminophen is. There’s a decent chance that you have taken acetaminophen at some point in your life. It’s the key active ingredient in Tylenol and supposed to relieve your pain or reduce your fever. It is otherwise known as paracetamol, acetyl-para-aminophenol, or APAP, if you want multiple different ways to ask for the same thing.

Tylenol ain’t the only thing with APAP. Acetaminophen can be like Waldo in a range of different over-the-counter medications that claim to provide pain relief or make you feel better. This includes Actifed, Alka-Seltzer Plus Liquid Gels, Cepacol, Contac, Dayquil, Dimetapp, Dristan, Excedrin, Midol, Nyquil, Panadol, Robitussin Singlet, Sinutab, Sudafed, Theraflu, Triaminic, Vanquish, Vicks, and Zicam. As you may have noticed, “may cause cancer” isn’t a typical warning on such medications. 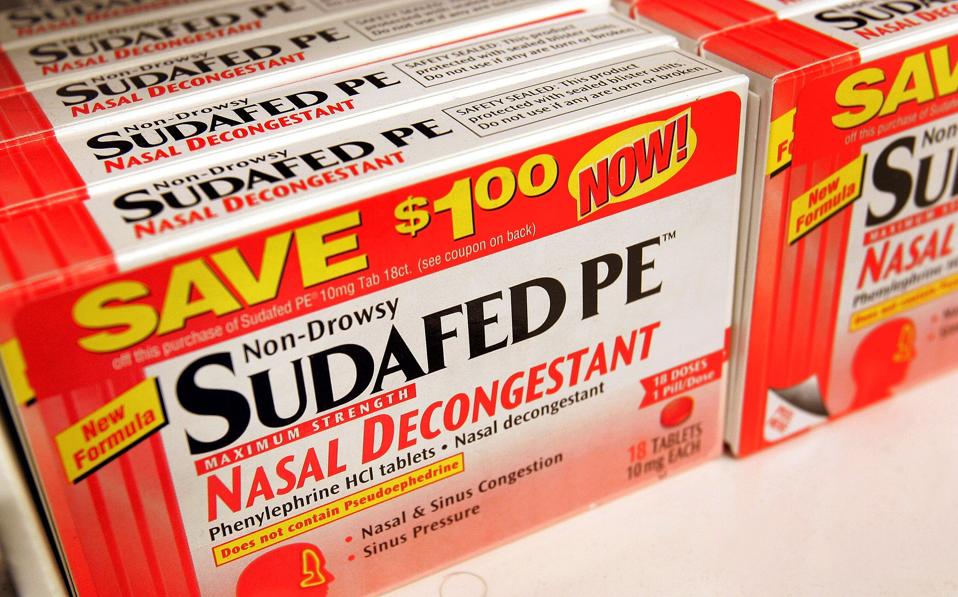 Acetaminophen can also been found in medications such as Sudafed PE. (Photo by Tim Boyle/Getty … [+] Images)

So does taking acetaminophen really increase your risk of cancer? The answer is a definite, absolute ummmmm.

Acetaminophen does have some known risks. Certainly, if you are allergic to acetaminophen, don’t take it. That can be like running into a Star Trek convention wearing a “I Hate Mr. Spock” shirt. It’s asking for trouble. Hives, swelling, or difficulty breathing can be signs that you are having a bad allergic reaction, which could be life-threatening.

Acetaminophen can also cause a rare trio of bad skin reactions, as the U.S. Food and Drug Administration (FDA) had warned in 2015. The first of this three, Stevens-Johnson Syndrome, may sound like a law firm, but is actually a medical emergency, starting with flu-like symptoms and then progressing to a a painful red or purplish rash and maybe eventually to sepsis and even death. The second, toxic epidermal necrolysis, would be a terrible name for a law firm but is essentially like Stevens-Johnson Syndrome but more severe. The third, acute generalized exanthematous pustulosis, unlike the first two, is typically not life threatening, but can be very unpleasant. After all, having a fever and dozens to hundreds of small blisters filled with white or yellow fluid over red patches of skin is not necessarily the best of times.

The other concern with acetaminophen is liver damage. This can be life threatening, because you kind of need your liver to live. Your risk of liver damage goes up if you take more than the recommended dose of acetaminophen, take it with alcohol, or already have some type of liver disease, as the FDA warns.

As this ABC News segment shows, the risk of liver failure prompted Johnson & Johnson, to add a warning on the cap of Tylenol bottles that says, “contains acetaminophen, always read the label”:

This warning will help in case you tend to put random things in your mouth without knowing what they are.

But the risk of cancer is a different story. To borrow the name of a Meryl Streep and Alec Baldwin movie, it’s complicated. As a review article by Noel Weiss, a Professor of Epidemiology at the University of Washington published in journal Cancer Causes and Control indicated, some case-control studies have shown an increased incidence of renal cell carcinoma (which is a cancer of the kidney), lymphoma, leukemia, and plasma cell disorders among acetaminophen compared to non-users. Increased risk of liver cancer is a possibility too.

However, such studies have offered only indirect evidence because it was not clear what else may be different about acetaminophen users. For example, maybe those using acetaminophen happened to have other habits, exposures, or underlying problems that left them already at increased risk for those cancers. As a report from the California Environmental Protection Agency summarized, laboratory studies have shown that acetaminophen can cause mutations in hamster, mouse, and rat cells. But what happens in rats and other rodents may not happen in humans, even if you are a bit of a scoundrel.

So far, the International Agency for Research on Cancer and the FDA haven’t been convinced to issue warnings that acetaminophen can raise your risk of different cancers. The Consumer Healthcare Products Association (CHPA), a trade association that represents over-the-counter (OTC) medicines and dietary supplements manufacturers and marketers, issued the following statement: “In order to be listed under Prop 65 in California, acetaminophen must be ‘clearly shown through scientifically valid testing according to generally accepted principles’ to cause cancer. An up-to-date review of the scientific evidence based on input from leading experts in the fields of epidemiology, genotoxicity, and animal carcinogenicity found that the weight of the scientific evidence clearly demonstrates there is no causal association between acetaminophen use and cancer.”

I’ve also reached out to Johnson & Johnson, the makers of Tylenol, for comment.

Can you rule out the possibility that taking acetaminophen could raise your risk of cancer. Certainly not. The studies to date deserve more follow up and further investigation. In the meantime, remember that Tylenol and other medications with acetaminophen are still medications that should be used sparingly. Medications will not make that dirt bag in your office that’s giving you headaches go away or keep you from getting infections when you aren’t washing your filthy stool-covered hands. If you find yourself having to regularly take Tylenol, maybe it’s time to talk to your doctor to figure out how to better deal with your pain or other symptoms. If you’ve done that already and have an ongoing condition that requires something for pain relief, continue to discuss with your doctor possible alternatives that may decrease your reliance on pain medications.

But putting more and more chemicals on the Proposition 65 list does run the risk of diluting and decreasing the value of the list. Not all of the chemicals on the list are equal. Some are worse than others. Yes, there are continuing questions about acetaminophen that call for further research. However, no one will say that taking acetaminophen by mouth is as bad as inhaling cocaine, for example. So the question is where to draw the line, so to speak?

American Cannabis Stocks Are Working Their Way To Wall Street