Breaking
Best Incentive To Get Vaccinated: Money, Messaging, Or...
Page Level Query Analysis at Scale with Google...
How A CIO Can Align IT With Business...
Blogger of the Month: Jo, Girl Eats World
6 Things Women In Business Know That Men...
How to Use First-Party Data for Ad Personalization
Pressing Reset—Putting A Fallen Unicorn Back On Its...
How We Went Viral: Promoting Content with Influencers,...
Blame Olympic Record Price Tag For Return To...
Apple iOS 14.5 Release: Should You Upgrade?
Why Gaming Gear Company Razer Launched A $50...
Technical SEO Implementations to Increase the Impact of...
30 Brilliant Ways to Market Your Eco-Friendly Shopify...
15 Tech Industry Leaders Share Overused (And Misused)...
How to Use Amazon Posts to Promote Your...
U.S. House Passes Bill To Create First Crypto...
Home Business Tyler Herro Keeps Coming Up Big For Miami Heat
Business 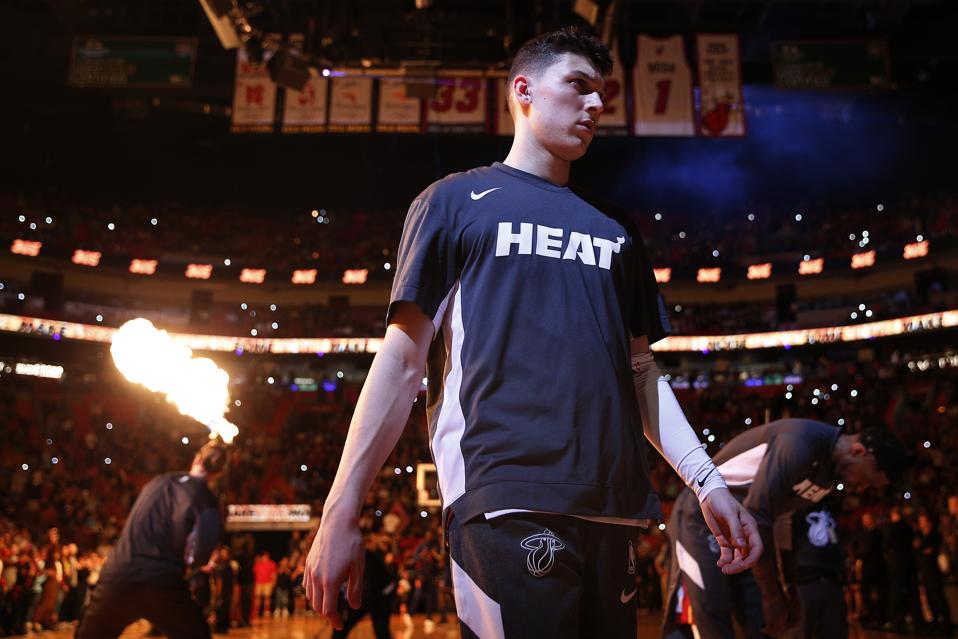 MIAMI, FLORIDA – DECEMBER 20: Tyler Herro #14 of the Miami Heat looks on prior to the game against … [+] the New York Knicks at American Airlines Arena on December 20, 2019 in Miami, Florida. NOTE TO USER: User expressly acknowledges and agrees that, by downloading and/or using this photograph, user is consenting to the terms and conditions of the Getty Images License Agreement. (Photo by Michael Reaves/Getty Images)

It’s the thin wisp of hair that clings precariously to Tyler Herro’s upper lip. Unlike the rest of him, the “mustache” might be unsure of whether it should be there at all. But Herro himself, just 30 games into his NBA career is proving that he is more than capable of making an impact.

In a December 23 win over the Utah Jazz, it was Herro – not veteran All-Stars like Jimmy Butler or Goran Dragic – who helped seal the victory for Miami. And head coach Erik Spoelstra had no issue going to his 19-year-old rookie in a close game against a strong Western Conference opponent.

“He has that [knack for big moments],” said a relieved Spoelstra after the win. “You’ve seen that over and over here. He had that in college. These are qualities that you can’t really define. You just know it when you see it. He steps up and has bigger moments when the game is on the line. Those plays that he was making, what’s important about those plays, is that Goran and Jimmy were on the court on the same time. We were running our offense through him and they felt fully confident [in him] because he was attacking that coverage more efficiently than anybody else. That speaks a lot when you have those experienced all-star veterans wanting you to make the play. “

With Rudy Gobert controlling the paint and making his usual impact in Utah’s defensive schemes, it was up to Miami to find those infrequent openings and take advantage. Those openings came courtesy of Herro and at Donovan Mitchell’s expense.

Herro has quickly become a favorite among Heat fans for his long-range shooting and ankle-breaking dribbling. When he started off the game missing his first three shots, the crowd noise built to an anticipatory roar after each attempt, only to end in a deflated moan. By the time he finished the game connecting on seven of his next 10 shots, attendees were as raucous as ever, watching a future star in the making.

“I’ve always been poised,” said Herro calmly after the win, “but I’ve definitely gotten better. The game’s really slowing down for me.”

Miami is viewed in a tier below other title contenders in Los Angeles, Milwaukee and Philadelphia. They are deep, perhaps even deeper than most other NBA teams. Bam Adebayo’s growth gives them a versatile player that can defend at a high level and be a playmaker on offense. Dragic, when healthy, is still a capable player that can produce off the bench.

Herro, along with Kendrick Nunn and Duncan Robinson – both of whom have been starters for most of the season – have formed a trio of young players that have regularly been relied upon to contribute to the team’s 22-8 record. Against Utah, they combined for 32 points, 17 of those coming from the rookie out of Kentucky.

But if there’s a concern about Miami’s hot start, it’s just how much this relatively unproven core can be counted on during the playoffs. As a result, the Heat have been perennially linked in trade rumors for another established star to pair with Butler this season.

Herro is far from a perfect player. His numbers are solid (averages of 14.0 points, 4.1 rebounds and 2.1 assists per game) and he’s still susceptible, as one might expect, to games where his impact is minimized, especially when his shots aren’t falling.

It speaks volumes that Dragic, who had seen the growth of fellow Slovenian Luka Doncic, wasn’t at all fazed by Herro’s performance against the Jazz. “I see him every day in every practice,” Dragic told me after the game. “He has a great confidence and he trusts and believes in himself.”

If there’s a need for Miami to acquire another star, it’s for someone who can carry the load offensively, who is willing to take – and make – the big shots down the stretch. And it will also require Butler, and to a lesser extent, Dragic, to relinquish some offensive control. Against the Jazz, that person was Herro, and neither of the established stars had any issue with that.

“We want him to play like that,” added Dragic. “He’s a big part of this team and you could see it tonight when he was making great plays for us to bring the game home.” If Dragic had any concern about turning to a wiry teenager during a close game against a quality opponent, he shot that idea down by shrugging his shoulders and nodding succinctly.