“China has, over the objections of the U.S. government, impaired the operating rights of U.S. carriers,” Department of Transportation Assistant Secretary Joel Szabat wrote to Chinese airlines in a public letter. 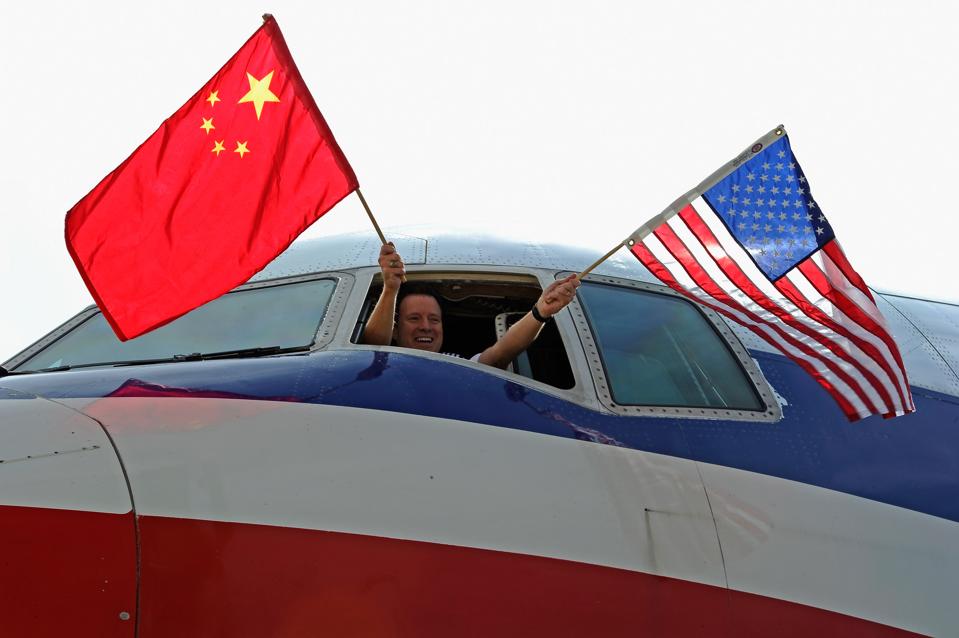 Szabat ordered seven Chinese airlines to submit their U.S. flight schedules by May 27. It is a banal procedure of publicly available information – take off time, aircraft type, codeshare – but Szabat said the U.S. would assess if those Chinese flights “may be contrary to applicable law or adversely affect the public interest.”

This dispute dates to March when China restricted airlines to having one passenger flight into the country, a limitation that gave China time to develop health protocols for screening international flights.

The policy was universal; Chinese airlines were also capped at one weekly passenger flight.

China’s local coronavirus infections were rapidly decreasing but imported cases were growing. Chinese airlines and airports implemented biosecurity policies faster and more extensively than U.S. peers, even though all three major U.S. airlines partner with Chinese carriers they can call on to share experiences and best practices. 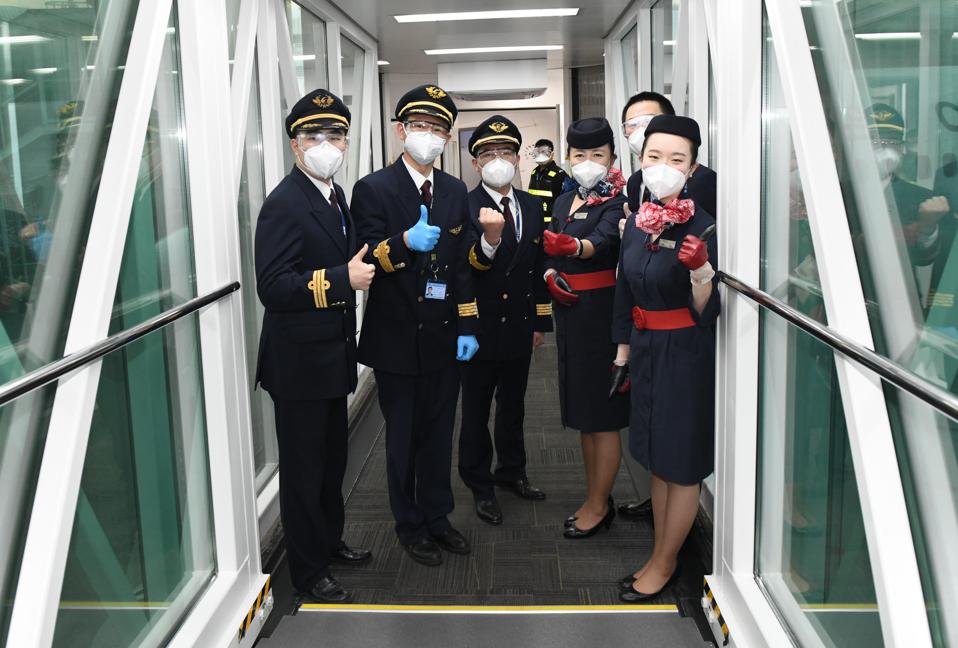 The U.S. argues China’s flight restriction “imposes capacity limitations” that are “inconsistent” with their historical aviation treaty. However, the four page U.S. letter makes no reference to coronavirus or COVID-19, the extenuating circumstances behind the restrictions.

Chinese airlines are understood to want the policy lifted as well, believing they can safely transport passengers across more than one weekly flight.

Szabat said U.S. airlines should be able to “exercise their full bilateral rights.” The U.S. however has effectively limited airlines elsewhere, such as by prohibiting the entry of Europeans. 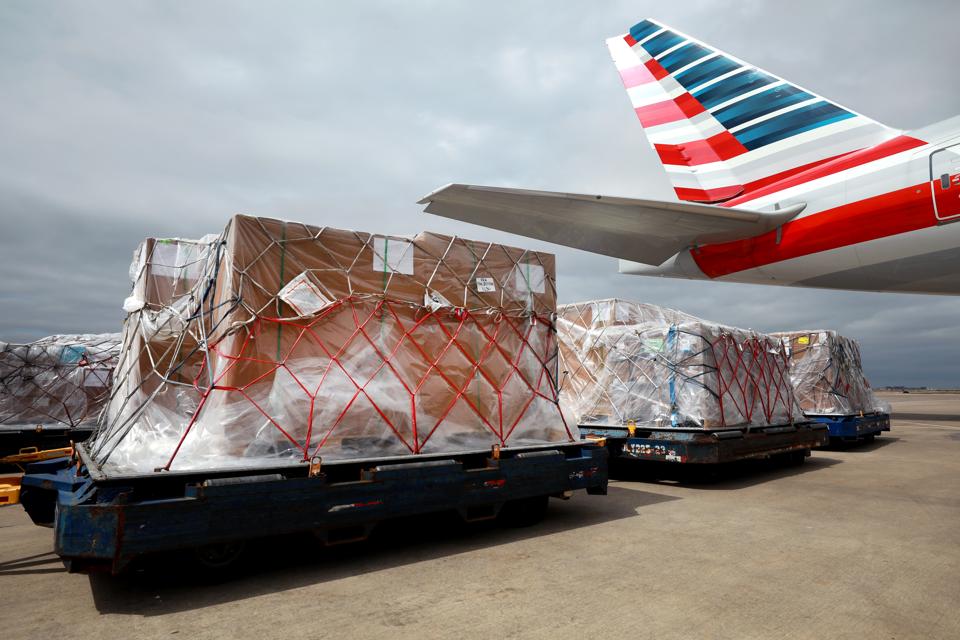 DALLAS, TEXAS – MARCH 20: American Airlines fleet services employees prepare to load cargo pallets … [+] on a 777-300 at Dallas/Fort Worth International Airport (DFW) bound for Frankfurt Airport in Germany during the cornoavirus (COVID-19) pandemic on March 20, 2020 in Dallas, Texas. The first cargo-only flight departs from Dallas Fort Worth International Airport (DFW) tomorrow, March 20, landing at Frankfurt Airport (FRA) March 21. The Boeing 777-300 will operate two round trips between DFW and FRA over the course of four days, carrying only cargo and necessary flight personnel. This is the first scheduled cargo-only fight since 1984 when American retired the last of its Boeing 747 freighters. (Photo by Tom Pennington/Getty Images)

In its complaint about passenger flights, the U.S. did not acknowledge China helped all three major U.S. airlines start and increase cargo flights.

Cargo airlines and ad hoc providers – including a 767 from the owner of the New England Patriots – have also received assistance for China-U.S. cargo flights, carrying medical supplies and general freight. 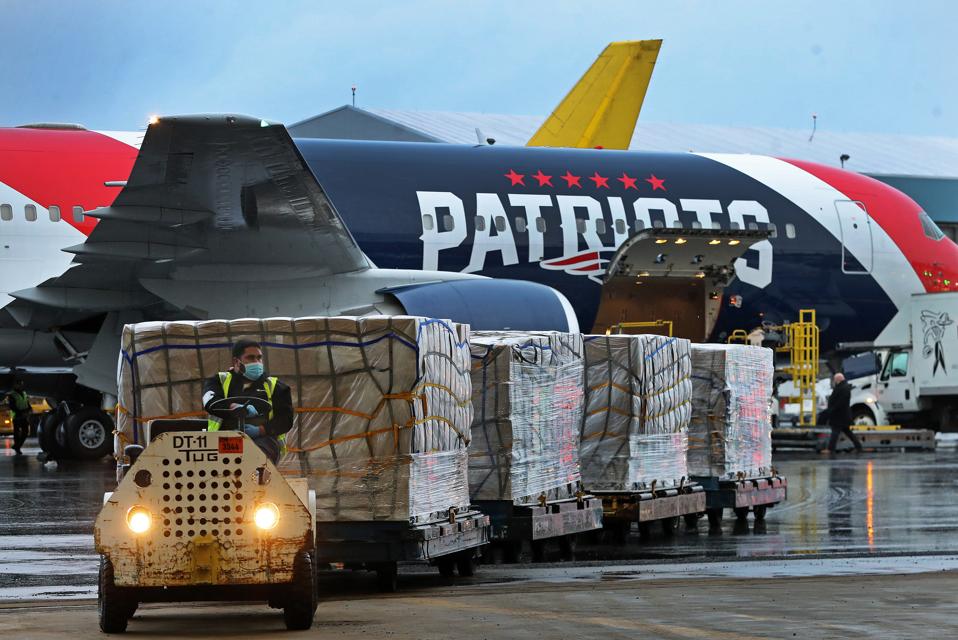 BOSTON, MA – APRIL 2: A New England Patriots jet arrives at Logan Airport in East Boston on Apr. 1, … [+] 2020 after flying from China with a massive shipment of over one million N95 masks which will be used in Boston and New York to help fight the spread of the coronavirus. Part of the shipment is driven into a hanger after being off loaded from the plane. (Photo by Jim Davis/The Boston Globe via Getty Images)

China’s one weekly flight policy, announced March 26, had a further clause that future flights could not exceed the levels of March 12. U.S. airlines started pulling down their China flights in late January and had no services by March 12, making them ineligible for even one weekly flight.

“However, the restriction to once-weekly service on one route to China would remain in place,” Szabat wrote. That would preclude Delta and United from operating the multiple flights they want across numerous routes.

Delta and United submitted passenger flight applications to China but have not received a response, Szabat said.

All flights would be daily. Delta’s proposed 14 weekly passengers flights and United’s proposed 28 weekly flights exceed the current limit of one for each airline. 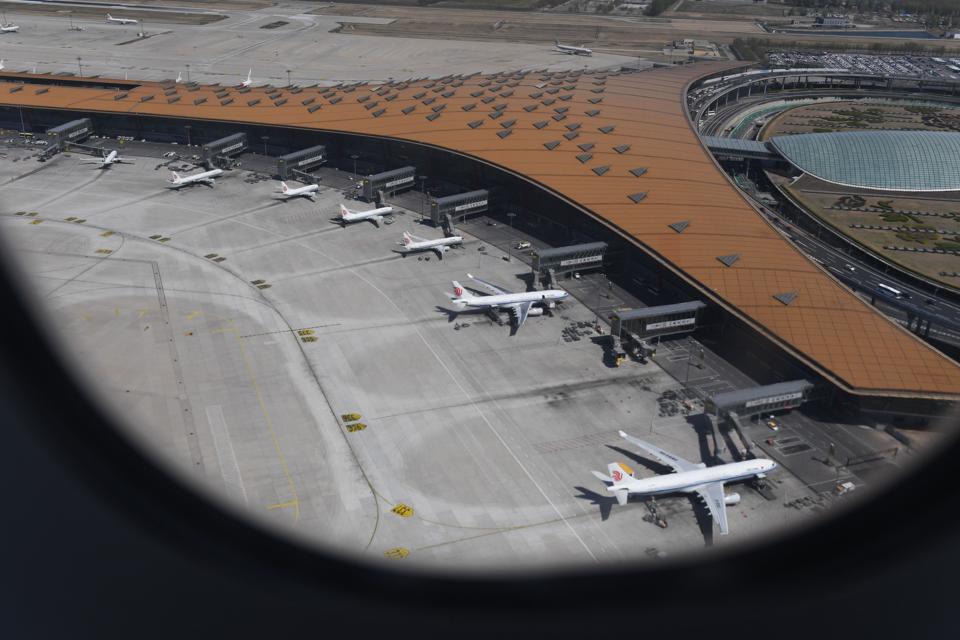 This aerial view taken through the window of a plane, shows various Airbus A330 and Boeing 737 … [+] planes of Air China parked at the gates of terminal 3 at Beijing’s capital airport on April 11, 2018. (Photo by GREG BAKER / AFP) / The erroneous mention[s] appearing in the metadata of this photo by GREG BAKER has been modified in AFP systems in the following manner: [Terminal 3] instead of [Terminal 1]. Please immediately remove the erroneous mention[s] from all your online services and delete it (them) from your servers. If you have been authorized by AFP to distribute it (them) to third parties, please ensure that the same actions are carried out by them. Failure to promptly comply with these instructions will entail liability on your part for any continued or post notification usage. Therefore we thank you very much for all your attention and prompt action. We are sorry for the inconvenience this notification may cause and remain at your disposal for any further information you may require. (Photo credit should read GREG BAKER/AFP via Getty Images)

Airlines from Qatar, South Korea and Turkey also plan to serve multiple Chinese destinations from June, which would require a lifting of the restriction, known as the “Five Ones.” That limits one airline to having one flight a week on one route from one Chinese city to one foreign city.

The timing of the U.S. is questionable, applying pressure right after China started the so-called “Two Sessions,” its most important political event. Public policy proclamations decrease in the lead up to the Two Sessions, where the government reviews past work and sets out broad objectives.

The gathering is so high profile that Zhenglin Feng, the administrator of aviation body CAAC, visited Beijing’s Capital and Daxing airports to ensure preparations and see their latest coronavirus prevention initiatives, such as increased terminal ventilation – which airports globally have shunned in favor of centralized air conditioning and heating.

Qantas Picks The A350: Was It Rolls-Royce Versus...

5 Reasons Why The Coronavirus Quarantine Is The...