U.S. Trade Representative Robert Lighthizer gestures toward assembled journalists in the Oval Office … [+] on Friday in discussing an initial deal with China that put the brakes on the trade war, for the time being. President Trump and Treasury Secretary Steve Mnuchin look on.

U.S. export losses to China thus far in the trade war have totaled about $30 billion, with exporters of seven product categories seeing losses in excess of $1 billion each and another 41 topping $100 million.

A second column focuses on U.S. imports from China, which dropped more than $54 billion in a similar time period, including losses exceeding $1 billion for 10 import categories and more than $100 million for another 77.

The percentage loss for U.S. exports, while less than half in value, is about double for that of U.S. imports during the trade war. Why? Because China imports so much more into the United States than it exports from the United States.

Why write this column now?

On Friday, facing the gun of an impending deadline that had been set by President Trump, the United States and China announced that the two sides had reached a modest, first-stage agreement.

The chief impact was that it stopped the United States from adding tariffs on the remaining $150 billion of Chinese imports, which had been scheduled for yesterday — and stopped China from looking for a way to retaliate, including against U.S. multinationals operating there.

So, the pause in the trade war provided me an opportunity to look at the $84 billion in export and import losses incurred to date. I compared each month to the same month in the previous year — October 2019 to October 2018, for example — for more than 2,400 specific exports and imports.

The time period is slightly different because in the case of both exports and imports, I wanted to start with the month in which the impact of the trade war began to show up, when trade took a downturn. For U.S. exports, that was August of 2018. For imports into the United States, it was three months later, in November.

The biggest monthly loss on the U.S. export side was last December, when exports fell $4.49 billion, including a $1.48 billion decline in soybeans and a $559.13 million decline in motor vehicles.

What must have been disconcerting to the Chinese was that the biggest loss on the import side was in October, the latest data, at $12.06 billion. That included declines of $1.17 billion in cell phones and related equipment as well as losses exceeding $400 million for computers, furniture and video game consoles.

Relatively speaking, how much is that $84 billion total loss in two-way trade between China and United States during the trade war?

Here’s a closer look at exports.

From August 2018 to October of this year, those seven exports that topped $1 billion in losses accounted for almost 72% of the $29.86 billion decrease.

Ranked by the value of the decrease in export value over the period from August 2018 through October … [+] 2019.

Many are important markets for the United States. In close to half of these 48 categories, China accounted for at least 10% of the world market. 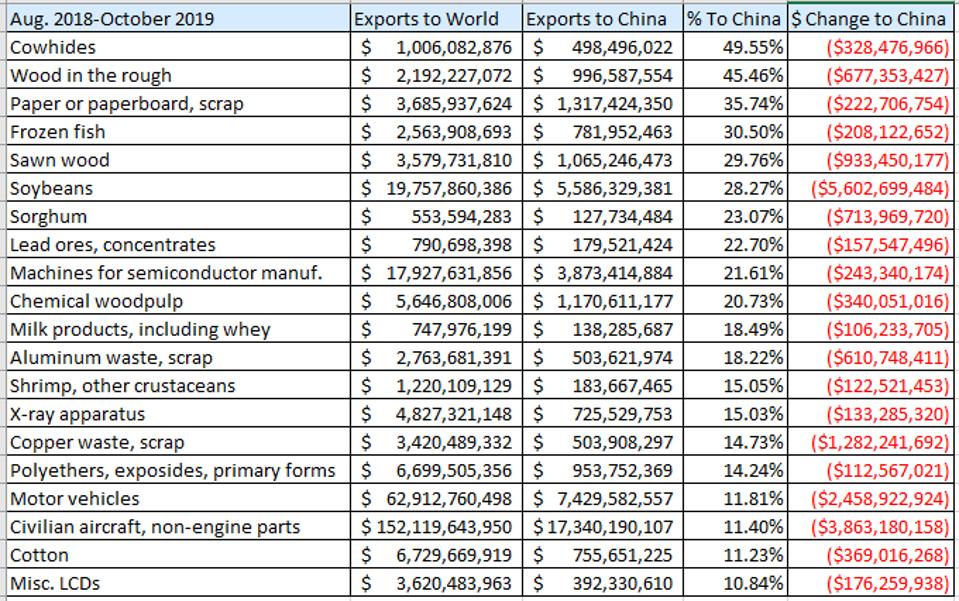 This chart ranks exports falling at least $100 million by the percentage of the world market that is … [+] China.

After A Gallant Sortie, Navy Shipbuilders Are Ready...

Dos And Don’ts For Restaurant Orders During The...

The Race To Reinvent Grocery: How Amazon, Walmart...

Why Now Is The Right Time To Start...