U.S. Restrictions On Travel From Europe Will Intensify Pain For Airlines Amid Coronavirus Pandemic

President Trump announced broad limits Wednesday night on travel to the United States from Europe. For 30 days starting Friday at midnight, non-U.S. citizens who have been in the European Union will be barred from entering the U.S. That’s going to hurt both U.S. and European carriers – a lot.

U.S.-European routes have historically been highly profitable for airlines. In 2019, United generated roughly 17% of passenger revenue from trans-Atlantic flights; Delta, 15%; and American, 11%. At its recent investor day, Delta said its trans-Atlantic profit margins were second only to domestic.

But it could be worse. Though spring is a popular time for Americans to visit Europe, mid-March through mid-April doesn’t come close to rivaling the peak summer travel period for Europeans visiting the U.S., or for that matter, Americans visiting the British Isles and the Continent. 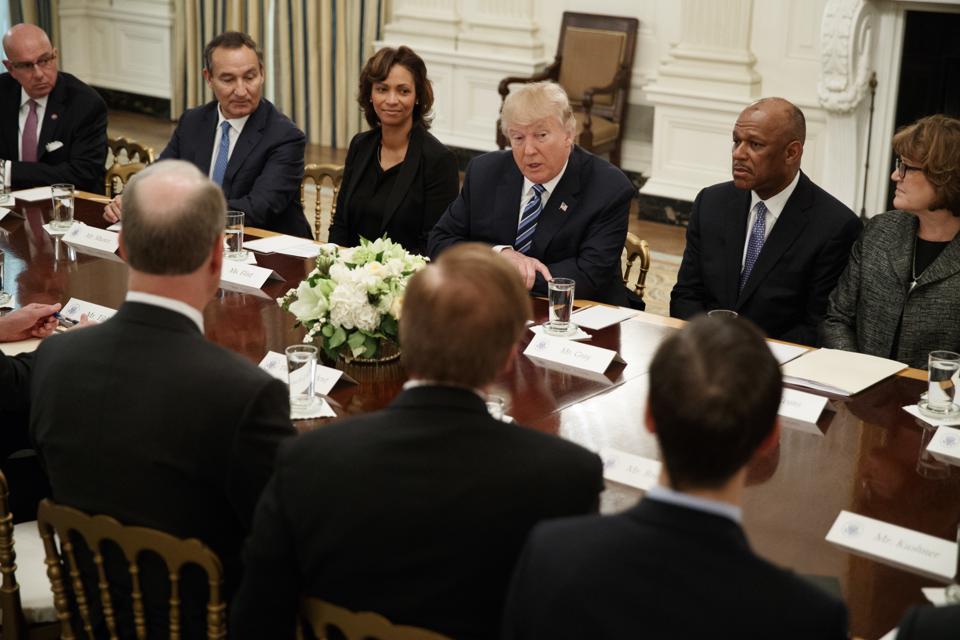 President Donald Trump met with top U.S. airline executives at the White House on Feb. 9, as the … [+] coronavirus was beginning to spread beyond China despite his actions banning travel between China and the U.S. (Evan Vucci/Associated Press)

Air travel already had entered a a steep decline as a result of the global spread of the coronavirus that causes COVID-19. The President’s emergency order is guaranteed to cause airlines serving the trans-Atlantic market to ground a large number of planes – planes that they likely will need to continue making loan or lease payments while they sit idle. For that and related reason, some carriers are likely to begin retiring older planes earlier than previously planned, especially since several already had said they were considering such actions prior to Trump’s announcement Wednesday night.

In response to the spread of coronavirus around the globe most U.S. airlines this week already had withdrawn the financial guidance they’d previously given to Wall Street analysts. That unusual step was a strong indication that most likely will report previously unexpected first quarter losses and left the door open to possible full-year losses, depending on how long the contagion – and its related scare – remains active in global and regional markets.

Trump’s announcement, delivered in a nationally televised speech from the Oval Office, now mean’s American Airlines CEO Doug Parker’s assurances two years ago that his carrier and its principle rivals had become so financially healthy they should never again report full-year losses will be put to a severe test.

For most of the past 25 to 30 years trans-Atlantic flights have been a primary source of profits for both U.S. and European carriers. British Airways famously raked in $1 billion a year throughout the 2010s on just one mega-route: New York-London, on which it offered as many as 15 flights each day every day.

But in recent years average fare prices have fallen or remained relatively static in the face of growing competition from discount airlines – mostly based in Europe – on those formerly lucrative routes. Only in the last 18 to 24 months has some of that competitive pressure on big conventional airlines eased a bit as several European discounters reduced service on or withdrew from the trans-Atlantic market.

WOW, a discounter based in Iceland, led the dramatic disruption of the trans-Atlantic air market with $99 fares each way – until it failed last year. Primera Air, another trans-Atlantic discounter, shut down in late 2018.

Norwegian Air, yet another discounter, is continuing its fight to gain market share and build profits in the trans-Atlantic market, but earlier this week said it would lay off at least 3,000 workers and ground a big chunk of its fleet temporarily in response to the COVID-19 pandemic (a term that the World Health Organization began applying to the coronavirus outbreak just Wednesday afternoon).

The restrictions will last at least 30 days but could be extended based on U.S. officials’ reading of the pandemic’s advance or pullback on both sides of the Atlantic.

According to the Massachusetts Institute of Technology’s Airline Data Project, the U.S. Big Three offered 139.6 billion seat miles between the U.S. and Europe in 2018, the last full year for which there is data. While that was up from 134.9 billion available seat miles in 2017, it’s still well below the 142.5 billion available seat miles that those three plus US Airways, Continental and Northwest airlines offered in 2008. Those three additional carriers disappeared between 2010 and 2014 as they merged, respectively, with American, United and Delta. Those mergers helped turn the trans-Atlantic market into a very profitable one for several years until the European discounters saw the results of that consolidation as an opportunity to enter the trans-Atlantic market and undercut the big conventional airlines.

Delta is the trans-Atlantic market leader currently in terms of both capacity and ridership, according to the MIT data. In 2018 it flew 50.7 billion available seat miles between Europe and the U.S., slightly ahead of United’s 49.7 billion seat miles and well ahead of American’s 39.2 billion. Delta had about 21.3% of its global capacity in the trans-Atlantic market in 2018, vs. 20.3% for United and 15.8% for American.

However, though American has a smaller position in the trans-Atlantic market, it will be less impacted by the 30-day ban on Europe-U.S. air travel than either of its rivals because more than half of its service over the Atlantic is between the U.S. and the U.K., where it has a hub at London’s Heathrow Airport. American also will benefit from domestic U.K. passengers funneling through Heathrow on flights operated by British Airways, with which American has trans-Atlantic joint venture revenue-sharing agreement that includes anti-trust immunity. Delta and United have similar agreements with their European partners – principally AirFrance-KLM for Delta and Lufthansa for United. But their joint ventures are centered on hubs in Paris, Amsterdam and Frankfurt, where the 30-day ban will be in effect.

Did Pension Actuaries Miss Their Chance To Make A Difference?

Missing James Bond No Time To Die? These...

K-Pop Tragedies Are The Face of Korean Economic...

‘The Mandalorian’ Ending Reveals A Core Problem With...