Breaking
How To Get Your Startup Business Off The...
How To Create A COVID Safe Construction Site
How to Make a Good First Impression at...
Best Legal Practices For Reopening Sports Venues During...
Why Now Is A Good Time To Start...
Here’s Why Texas Instruments’ Stock Growing Almost 2x...
LinkedIn’s 50 Best Startups To Work For In...
3 Marketing Mistakes Holding You Back From Hitting...
Is The Matter In Our Universe Fundamentally Stable...
Majority Support Covid-19 Price Controls Says New Brookings...
Reimagined Pan-Mass Challenge Approaches $41M 2020 Fundraising Goal
Is Bitcoin Poised To Bounce Back After Its...
These ‘Temporary’ COVID-19 Changes Will Become Permanent
How Will Our Mental Health Be Affected By...
Selling A Business During A Pandemic: When Talented...
Top 10 Digital Transformation Trends For 2021
Two Veteran Entrepreneurs Aspire To Clean Up America’s...
PPP Forgiveness Applications Are Opening Up. Should You...
Best Domain Registrar
Home Business U.S. Sanctions Hong Kong’s Leader Carrie Lam For ‘Policies Of Suppression’
Business

The Department of  Treasury on Friday imposed sanctions on 11 individuals including chief executive Carrie Lam for undermining Hong Kong’s autonomy and restricting freedom of expression amid rising tension between Washington and Beijing. 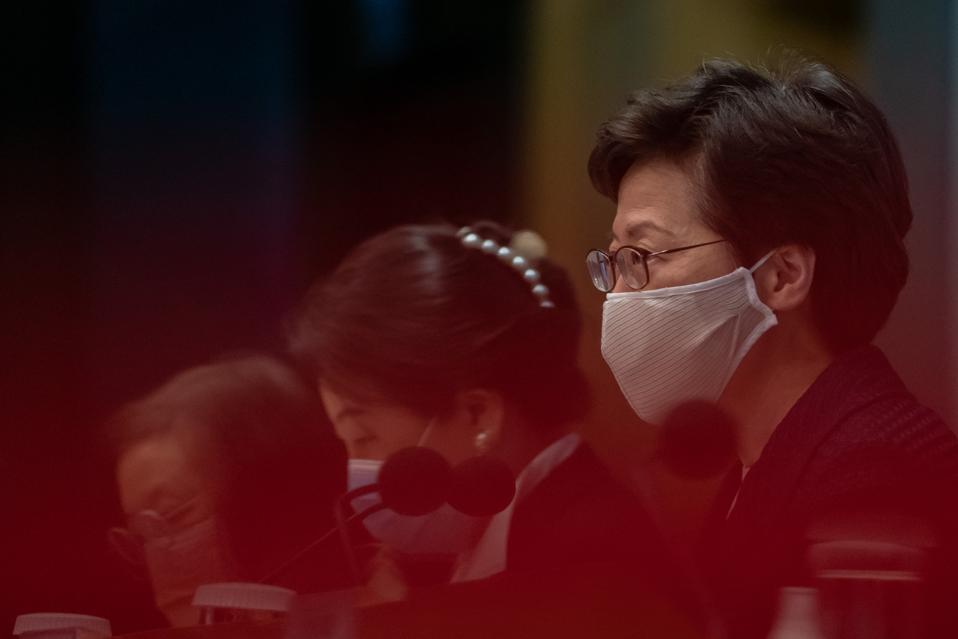 HONG KONG, CHINA – JULY 31: Hong Kong Chief Executive Carrie Lam speaks during a press conference at … [+] the Central Government Complex on July 31, 2020 in Hong Kong, China. Hong Kong announced that the Legislative Council elections will be postpooned for a year due to the surge of Covid-19 cases. (Photo by Anthony Kwan/Getty Images)

These 11 people will have their property and assets in the U.S. frozen, according to Bloomberg.

The sanctions are being carried out under President Trump’s July 14 executive order meant to punish China for its moves against dissent in Hong Kong.

Lam, who works closely with Chinese authorities, has scoffed at the prospect of being targeted by U.S. sanctions, telling reporters on July 31 that “I do not have any assets in the United States nor do I long for moving to the United States,” adding she would “just laugh it off” if the Trump administration sanctioned her.

President Trump signed a pair of executive orders Thursday prohibiting Americans from doing business with Beijing-based ByteDance, the company that owns TikTok, as well as transactions related to the app WeChat with its owner, the Chinese tech giant Tencent, beginning September 20.

“The United States stands with the people of Hong Kong and we will use our tools and authorities to target those undermining their autonomy,” said Secretary of the Treasury Steven T. Mnuchin.

Why Successful Entrepreneurs Need To Be Calculated Risk Takers

Call Of Duty: Warzone: How To Get The Code For The Stadium Keypad And The Enigma Blueprint