Breaking
‘Game & Watch: The Legend Of Zelda’ Will...
How to Get Results from Broken Link Building
Florida Supreme Court Tells The American Bar Association...
How to Write Perfect Paid Social Media Marketing...
How Restaurants Can Design a More Sustainable Food...
Expenses That Small Business Owners Need to Be...
How You Can Make Saying Goodbye To The...
Biden To Meet Royal Family At Cornwall’s Eden...
It’s Going To Be Emotional — Going International...
Peer Mentoring For Students: STEM & Buds
7 PR Trends in 2021: The Story So...
Google Plans Radical New Google Pixel Smartphone Upgrade
Where Did COVID Come From?
Ride To Growth With A Business Vehicle
C3.ai’s Tom Siebel: How To Scale AI
Moz Acquired by iContact Marketing Corp
Home Business UFC 245 Preview And Picks: Can Ketlen Vieira Earn A Title Fight?
Business 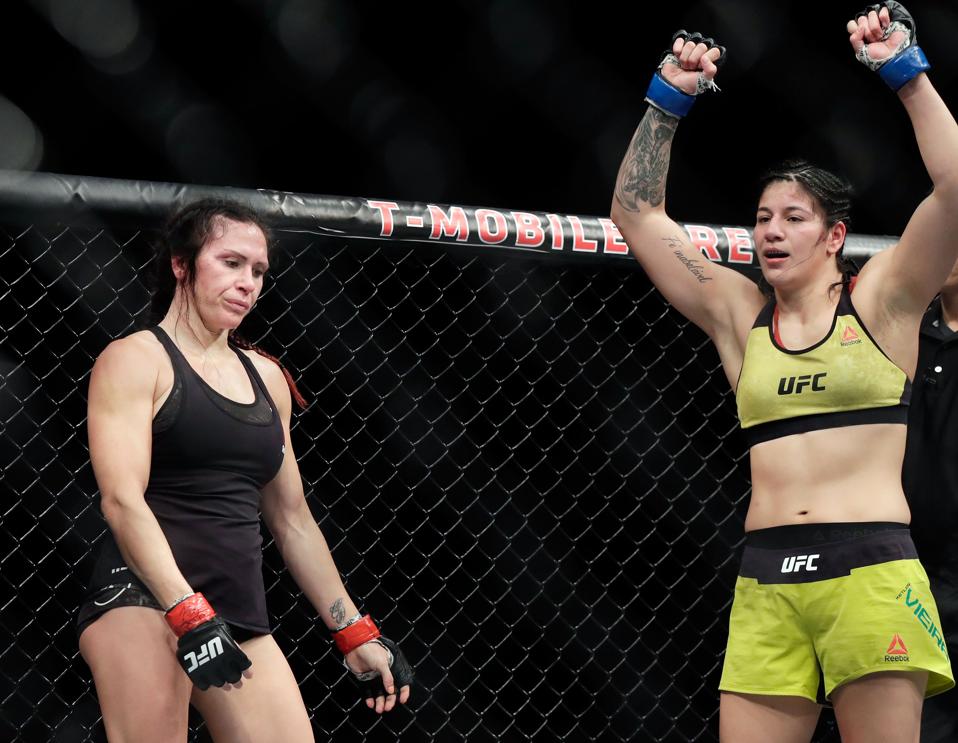 Ketlen Vieira has experienced a quick rise in the UFC women’s bantamweight division, between October 2016 and March 2018, the 28-year-old has gone 4-0 with the promotion including wins over two former UFC title challengers in her past two outings. Vieira, who is currently the No. 2 ranked fighter in the official UFC women’s bantamweight rankings, faces the No. 10 ranked Irene Aldana on Saturday’s UFC 245 pay-per-view card.

Vieira has not fought since she earned a split decision over Cat Zingano in early March 2018. She was set to face ex-Invicta bantamweight titleholder Tonya Evinger in September 2018, but Vieira suffered a knee injury that forced her from that contest. Aldana, a member of the UFC roster since September 2016, has fought four times since Vieira’s last outing. The 31-year-old is 3-1 in those bouts with her only loss coming to ex-women’s bantamweight title challenger Raquel Pennington in July.

This prelim bout is an under the radar fight on this stacked card. Vieira, a black belt in Brazilian jiu-jitsu, has been a revelation in the 135-pound division. She is a strong and physical fighter who has developed an immense amount of confidence since she first joined the promotion.

After her win over Zingano, Vieira, through an interpreter, that she wanted to fight for the UFC title in her next outing, that did not happen. However, with a win over Aldana, Vieira could punch her ticket for the next shot at the women’s bantamweight title. Current women’s bantamweight champion Amanda Nunes puts her title on the line against ex-UFC women’s featherweight titleholder Germaine de Randamie on the PPV portion of UFC 245.

Vieira spoke about that potential matchup ahead of Saturday’s fight card.

“I’m the No. 2 in the rankings and Amanda will fight the No. 1 on the same night,” Vieira told MMA Fighting. “I don’t see anyone else after I win this fight. I’ll automatically become the No. 1. Of course, every fighter wants to become champion, it’s my dream, but I’m focused on Irene Aldana now. To me, Irene Aldana is the one who has the belt right now.”

Are Batteries The New Oil?