Breaking
Bitcoin And Blockchain Are The ‘Future’ Of Twitter,...
COVID-19 Pandemic Has Birds Changing Their Tune
Beat Zoom Fatigue With These 6 Tips
How, When And Where You Can See A...
New $2.2 Trillion Stimulus Bill Proposed—$1,200 Stimulus Checks,...
Why Do We Do What We Do? Manipulating...
California Brand Goes All-American As Amazon Bans Foreign...
The 3 Best Analytics Companies of 2020
Senator Cory Booker: Supporting Small, Minority-Owned Businesses Will...
Trump’s Taxes Are Finally Leaked—What’s Next?
Washington Heats Up Ahead Of First Presidential Debate:...
Systemic Racism Leads To Disparities In Nursing Home...
The New Regular: Prepare For Conflicts Of Customer...
Web VR.0 – Have VR Websites (Finally) Arrived?...
This Next Evolution Of E-Commerce Did $18 Billion...
This Next Evolution Of Ecommerce Did $18 Billion...
Home Business UFC 245 Video: Watch Amanda Nunes Vs. Germaine De Randamie Countdown
Business 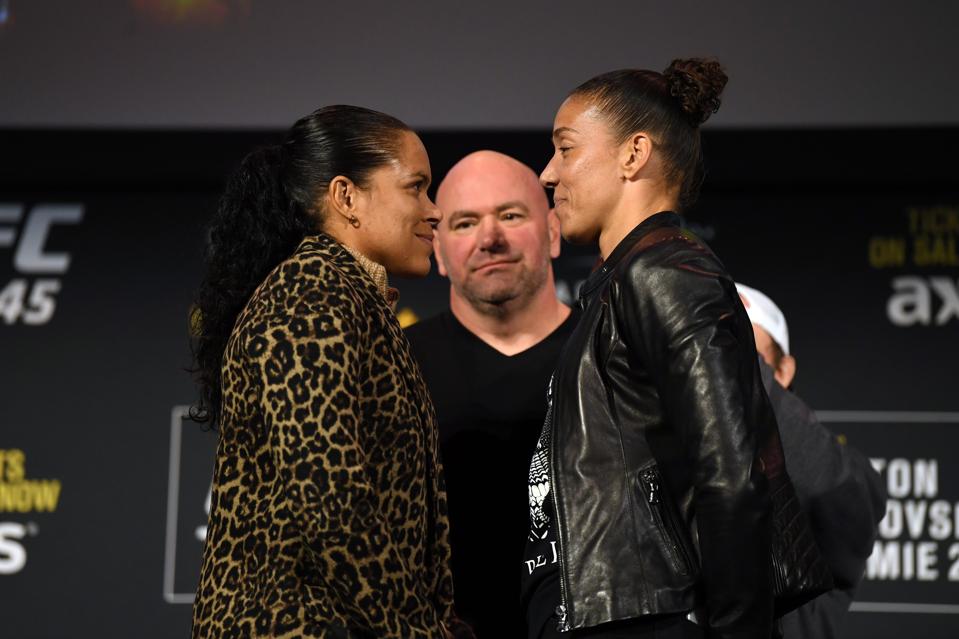 The UFC is in Las Vegas for Saturday’s UFC 245 pay-per-view card. The five-fight main card, which streams on ESPN+, features a total of three title fights. In the headliner, welterweight champion Kamaru Usman puts his title on the line for the first time when he faces former-interim champion Colby Covington. Featherweight kingpin Max Holloway meets the 20-1 Alexander Volkanovski in the co-headliner. Before those two contests, two-division women’s champion Amanda Nunes faces off against ex-women’s featherweight champ Germaine de Randamie in a bantamweight matchup.

Nunes and De Randamie have met before. The two scrapped on the prelims of the “UFC: Fight for the Troops 3” fight card in November 2013. Nunes won that fight via first-round TKO.

Since then, Nunes has put together a 9-1 record. During that stretch she has claimed both the women’s bantamweight and featherweight titles. Some of her noteworthy victories during that run include knockout wins over former-champions Ronda Rousey and Holly Holm.

Nunes claimed the women’s bantamweight crown in 2016 with a submission victory over Miesha Tate. Nunes took possession of her second UFC title in December 2018 with a first-round knockout win over Cris Cyborg. Nunes has successfully defended the 135-pound belt four times with three of those victories coming by stoppage.

De Randamie is 5-0 since she fell to Nunes. She won the women’s featherweight crown in 2017 with a victory over Holm. However, De Randamie was stripped of that belt soon after that win when she refused to fight Cyborg. De Randamie, who is the No. 1 ranked fighter in the official UFC women’s bantamweight rankings, is coming off a 16-second TKO win over Aspen Ladd in July. Nunes is currently a -300 favorite over De Randamie, who is a +230 underdog.

How To Watch Or Stream UFC 245: Moraes Vs. Aldo

UFC 245 Preview and Predictions: Will Geoff Neal Vs. Mike Perry Claim Fight Of The Night?

UFC 245 Preview And Picks: Can 40-Year-Old Urijah Faber Be The Comeback Kid?