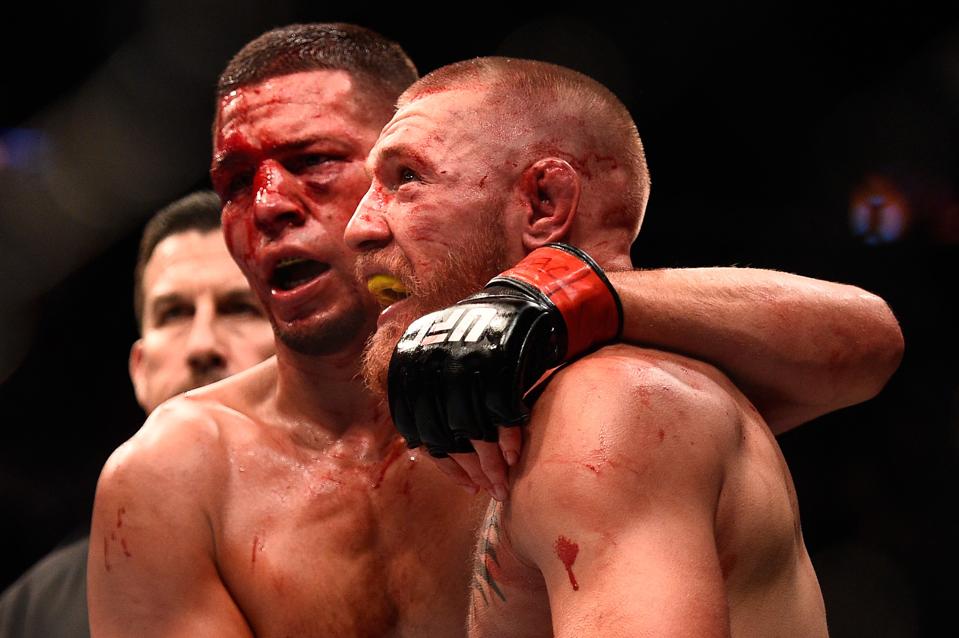 The first time Conor McGregor faced Nate Diaz, Diaz accepted the fight on short notice. McGregor was on a 15-fight winning streak at the time of the March 2016 bout. Before facing Diaz, he had stopped Jose Aldo in 13 seconds to become the undisputed featherweight champion. Despite moving up to 170 pounds for this fight, McGregor was a -400 favorite over Diaz, who was a +300 underdog. Diaz was coming off a unanimous decision win over Michael Johnson in a lightweight contest.

That fight ended in the second round when Diaz, bloodied by the punches of McGregor, launched an offensive onslaught that left McGregor shooting for a desperation takedown. McGregor, with his strength sapped, gave up his back and quickly tapped to a rear-naked choke at the 4:12 mark of the second stanza.

When the two met in August 2016 for their rematch, McGregor was once again the favorite, but he had dropped to -130, while Diaz came in as the +100 underdog.

The second battle was much closer than the first matchup.

After 25 minutes of action, blood covered both fighters. The crowd rewarded the two scrappers with a standing ovation. After getting cleaned up and catching their breath, McGregor and Diaz briefly embraced and shook hands as they waited for the scores to be revealed. Those scores were 48-47 for McGregor, 47-47, and 48-47 for McGregor, giving the majority decision to McGregor.

McGregor has not fought at welterweight since he faced Diaz in their rematch, which was the headlining bout of the UFC 202 pay-per-view card. He returns to the octagon on Saturday, January 18 to face Donald Cerrone in a 170-pound competition in the main event of UFC 246, which takes place at T-Mobile Arena in Las Vegas. The pay-per-view card streams on ESPN+, following prelims on ESPN and early prelims on UFC Fight Pass and ESPN+.

Before that contest takes place, which the full fight of McGregor vs. Diaz II.

Is Your Company Ready For CCPA Compliance?

T-Mobile for Business BrandVoice: Rising To The Coronavirus...

Supermarkets Draw Up ‘Feed The Nation’ Plans As...

Should We Be Worried By The Delay Of...