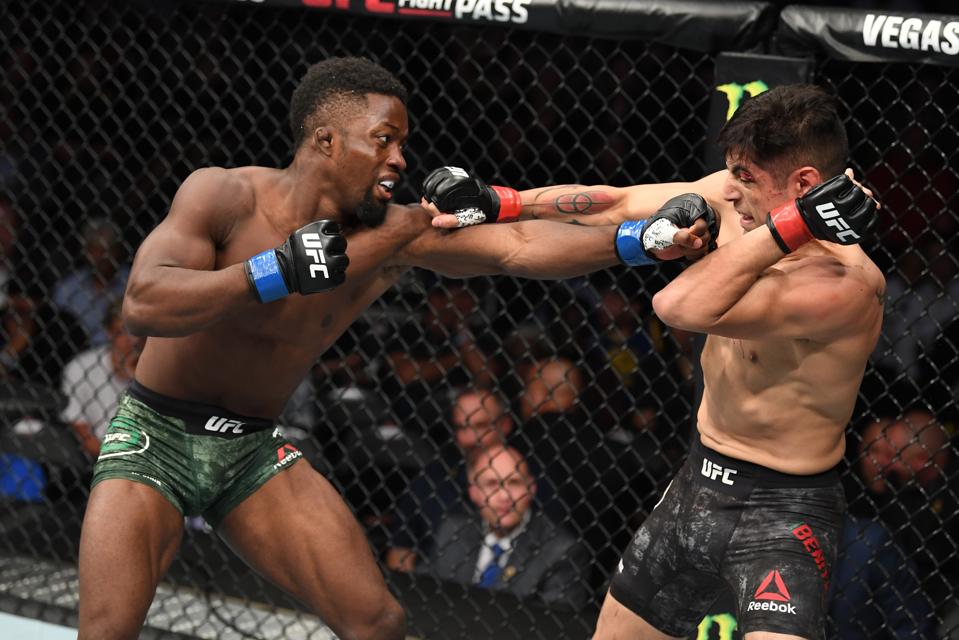 ANAHEIM, CALIFORNIA – AUGUST 17: (L-R) Sodiq Yusuff of Nigeria punches Gabriel Benitez of Mexico in … [+] their featherweight bout during the UFC 241 event at the Honda Center on August 17, 2019 in Anaheim, California. (Photo by Josh Hedges/Zuffa LLC/Zuffa LLC via Getty Images)

Sodiq Yusuff is unbeaten in the UFC. Since earning a deal with the promotion in 2018, Yusuff is 3-0 with two first-round TKO wins and one decision victory. The only loss o the record of the 26-year-old is a 2017 knockout setback on a Titan FC fight card. At UFC 246, Yusuff meets, Andre Fili.

When Fili signed with the UFC in 2013, he was in a situation that is similar to the one Yusuff found himself in. He was the new hot thing with the promotion, a young fighter with a potentially high upside.

Fili was 12-1 and on an eight-fight winning streak when he signed with the UFC. Fili has struggled to get his footing in the featherweight division. He is 8-5 with the promotion and has never won more than two fights in a row, and he’s only done that twice.

The 29-year-old defeated Artem Lobov and Dennis Bermudez before losing a split decision to Michael Johnson. In 2019, Fili defeated Myles Jury by decision and then scored a knockout against Sheymon Moraes. That knockout victory earned Fili his first “Performance of the Night” bonus since he scored a knockout win over Gabriel Benitez in 2015.

After his win over Gabriel Benitez in August, Yusuff requested a fight close to his home. Yusuff was denied placement on the December card in Washington, D.C, which is not far from where he lives in Maryland. Instead, Yusuff fights in Las Vegas, which is much closer to Fili’s home base of California.

A win in this fight could earn the victor a matchup against a top-15 ranked opponent. With the high stakes in this featherweight contest, this could be a sleeper pick for a fight-night bonus award.

WeWork Offloads Managed By Q For A Fraction...

Will Kevin Durant Play For Brooklyn This Season?...