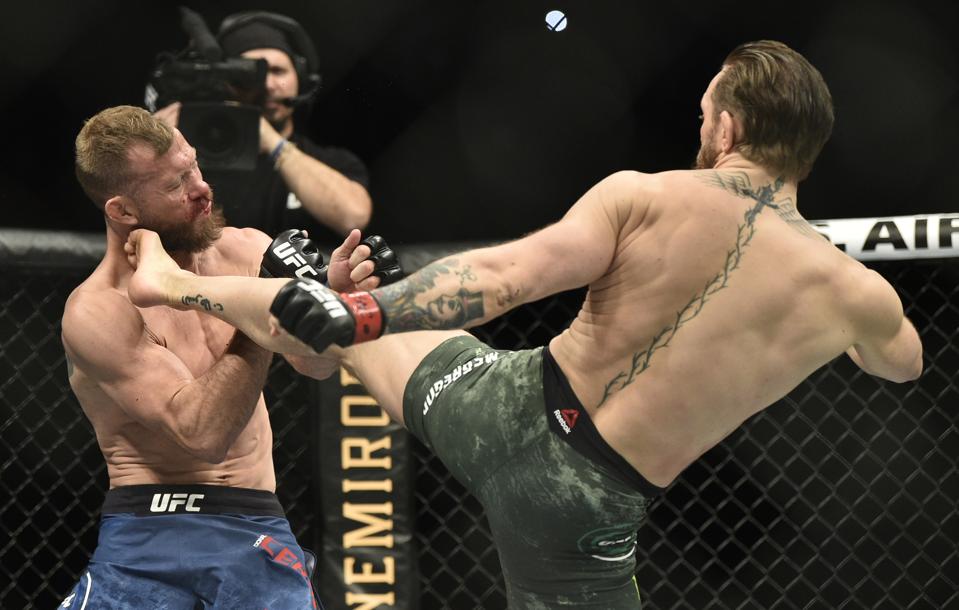 Conor McGregor returned to the Octagon with a bang.

In 40 seconds, McGregor destroyed Donald “Cowboy” Cerrone to score a definitive first-round TKO victory in his return to the UFC after a 15-month hiatus. To put it plainly, there isn’t much to analyze.

McGregor came out and launched a lead left hand. Cerrone ducked it and initiated the clinch. McGregor used some handy and unorthodox shoulder thrusts to disorient Cerrone. Moments later, McGregor landed a nasty left head kick that led to the stoppage.

Referee Herb Dean tried to give Cerrone a chance to recover, but he could never regain his wherewithal. The sellout crowd in attendance erupted as the fight came to an end. Here is a look at the 40-second scrap:

McGregor has a plethora of options after his speedy victory. He could be in play for a quick turnaround in March, or he could wait until April and perhaps face Jorge Masvidal in another huge-money bout.

Ultimately, McGregor has designs of winning another UFC world championship, and that could be at welterweight or lightweight. UFC Welterweight Champion Kamaru Usman was in attendance in Las Vegas, but he didn’t look impressed. A camera caught him feigning a yawn during McGregor’s post-fight interview.

We’ll likely find out what is in store for McGregor in the coming weeks. As for Cerrone, it seemed a retirement speech might be on the way. However, Cerrone quickly said he wanted to continue fighting. He has now lost three fights in a row, and all of the defeats have been by stoppage. Perhaps we’ll find out what is next for Cerrone. He turns 37 in March.

Here is a look at all of the results from Las Vegas.

Here is a closer look at the most notable results from Saturday night’s event.

It was a night of upsets.

Underdogs Brian Kelleher, Aleksei Oleinik, Roxanne Modafferi and Drew Dober all pulled off surprising wins. Modafferi’s win over the previously undefeated Maycee Barber was the most shocking. She came in as the biggest underdog on the card, but the Happy Warrior imposed her will on the ground and showed off some surprising boxing skills. 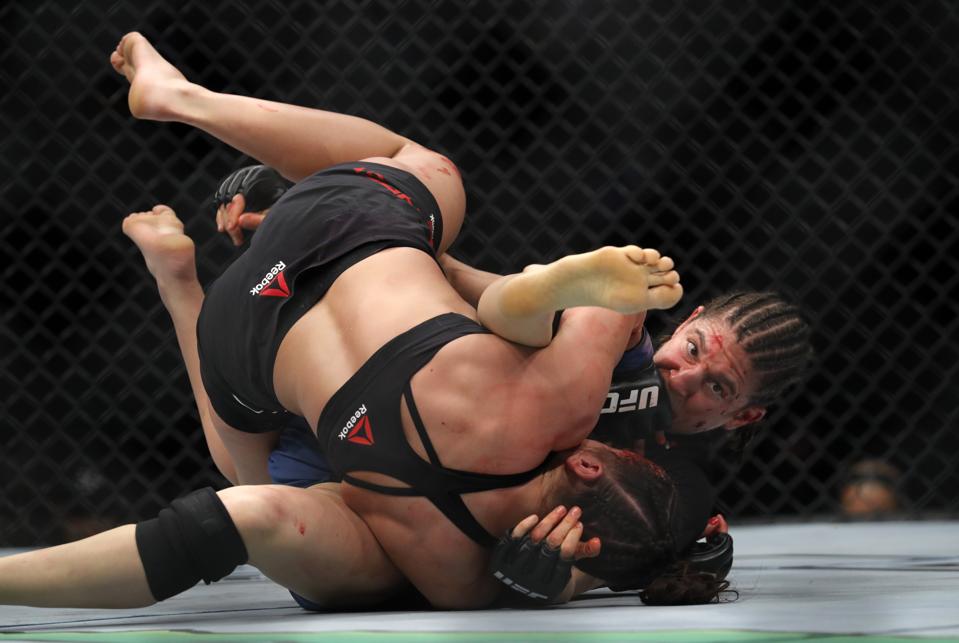 After Modafferi dominated the first round with her grappling, a hard straight punch put Barber down and she appeared to injure her knee as she fell. That injury left her compromised the rest of the way.

Barber gutted her way through to the final buzzer, but Modafferi took the lopsided unanimous decision to slow the youngster’s rise. 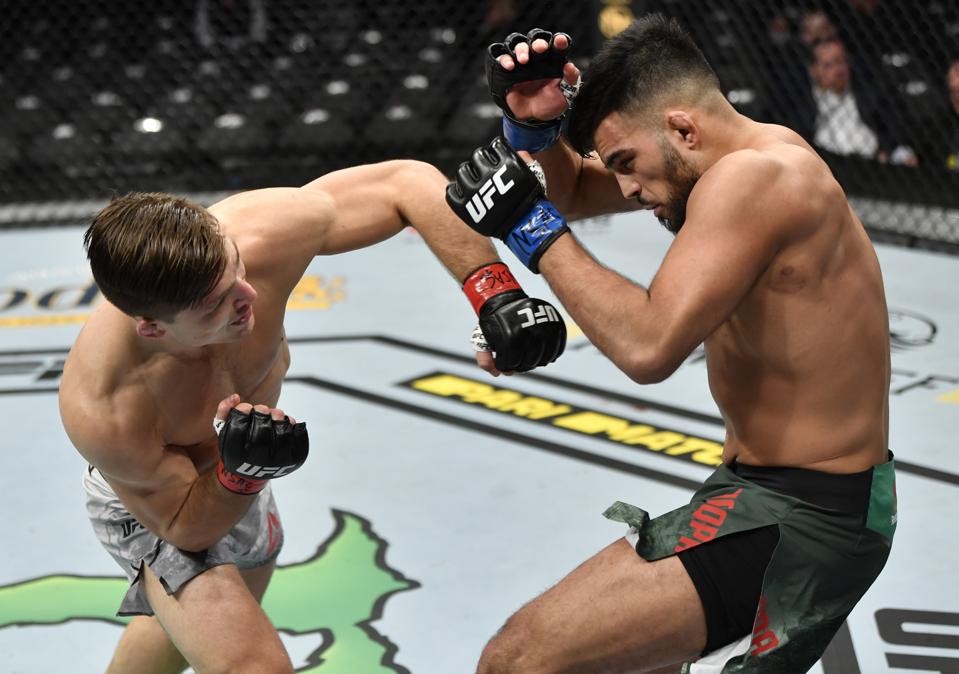 Dober shocked the Las Vegas crowd when he starched Nasrat Haqparast with a vicious left hook to the jaw.

Dober looked poised and fundamentally sound throughout the short fight. He appeared to be looking to punch in-between Haqparast’s mad rushes. Dober took advantage of the opportunity and got the bonus-winning stoppage. 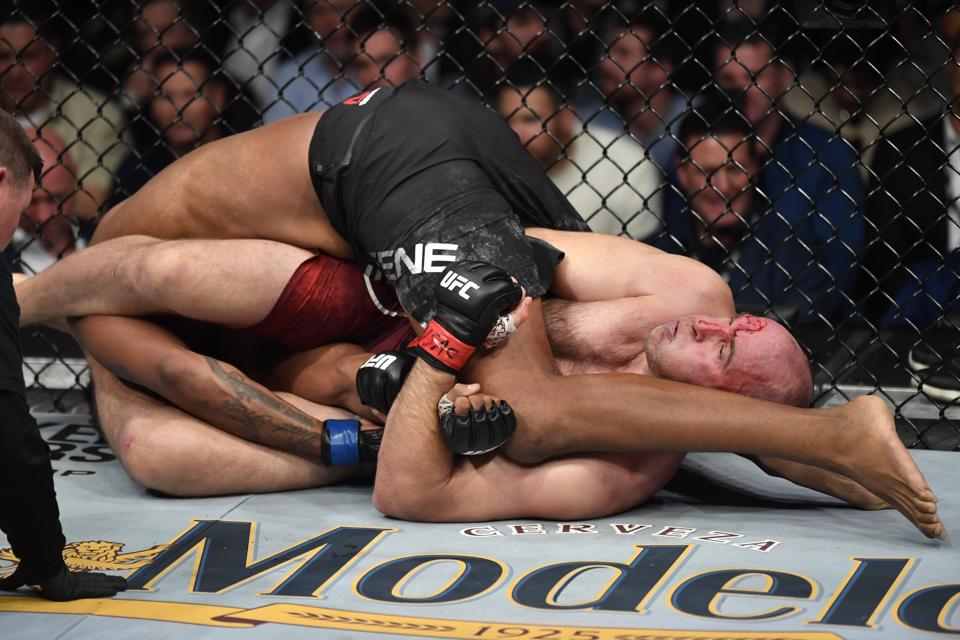 Oleinik had a tough time with the 6’7” Maurice Greene, but ultimately the Russian’s smothering ground game and expert submission game pulled him through. Oleinik caught Green in a compromising position in the first round. Greene was locked into a scarf-hold choke attempt, but he fought through and survived the round.

In the second, Greene had some success on his feet, but couldn’t fend off Oleinik’s takedown. After awhile on the ground, Oleinik maneuvered Greene into an armbar that forced the submission. At 42 years old, Oleinik continues to prove himself to be a formidable opponent in the heavyweight division. 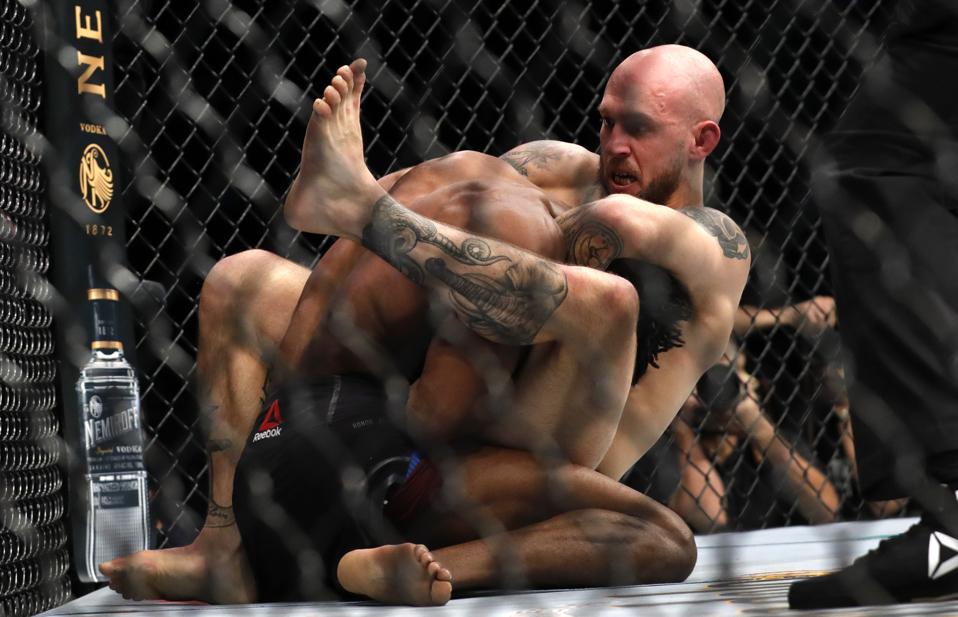 LAS VEGAS, NEVADA – JANUARY 18: Brian Kelleher (top) grapples with Ode’ Osbourne in a bantamweight … [+] bout during UFC 246 at T-Mobile Arena on January 18, 2020 in Las Vegas, Nevada. Kelleher won by submission in the first round. (Photo by Steve Marcus/Getty Images)

After avoiding some athletic strike attempts early in the round, Kelleher secured an arm-in guillotine that looked extraordinarily uncomfortable. Osbourne had no other choice but to tap out with his right foot with his arms tied up.

Why Agile Methodologies Miss The Mark For AI & ML Projects