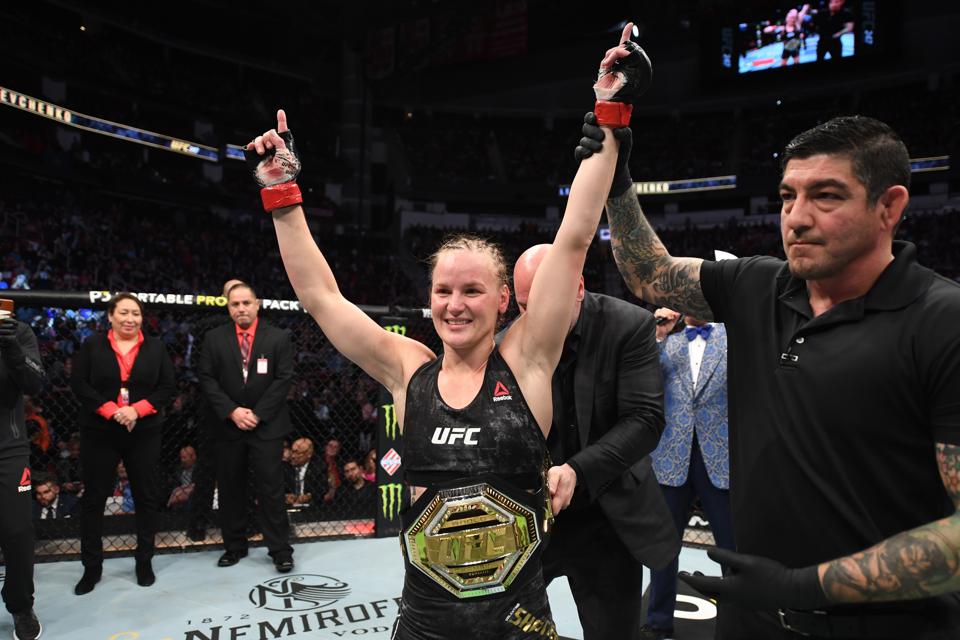 HOUSTON, TEXAS – FEBRUARY 08: Valentina Shevchenko of Kyrgyzstan celebrates her TKO victory over … [+] Katlyn Chookagian in their women’s flyweight championship bout during the UFC 247 event at Toyota Center on February 08, 2020 in Houston, Texas. (Photo by Josh Hedges/Zuffa LLC via Getty Images)

Valentina Shevchenko successfully defended her UFC women’s flyweight title on Saturday when she scored a third-round knockout win over Katlyn Chookagian in the co-main event of UFC 247. The stoppage victory could be a costly one for the champ, as she was handed a six-month medical suspension by the Texas Department of Licensing and Regulation after the event. UFC 247 took place at Toyota Center in Houston.

The competitors in the headlining bout, Jon Jones and Dominick Reyes fared much better. Jones won his record 14th UFC title fight with a unanimous decision win over Reyes. With the victory, Jones retained the UFC light heavyweight title. Despite battling for 25 minutes, Jones and Reyes received medical suspensions of 31 days each.

Trevin Giles and James Krause, who tested each other in the “Fight of the Night” were handed relatively short medical suspensions. Giles, who won the contest by split decision, will be out for 10 days. Krause who usually competes at welterweight, accepted the middleweight bout on weigh-in day. He was given a 31-day medical time out.

Smith-Clementi, The Architects Behind Some Of The Most Famous Music Venues In The U.S., Are Launching Their Own Firm

Five Reasons Why We Should Pray For John...

Here’s Why Your Apple App Store Purchases May...