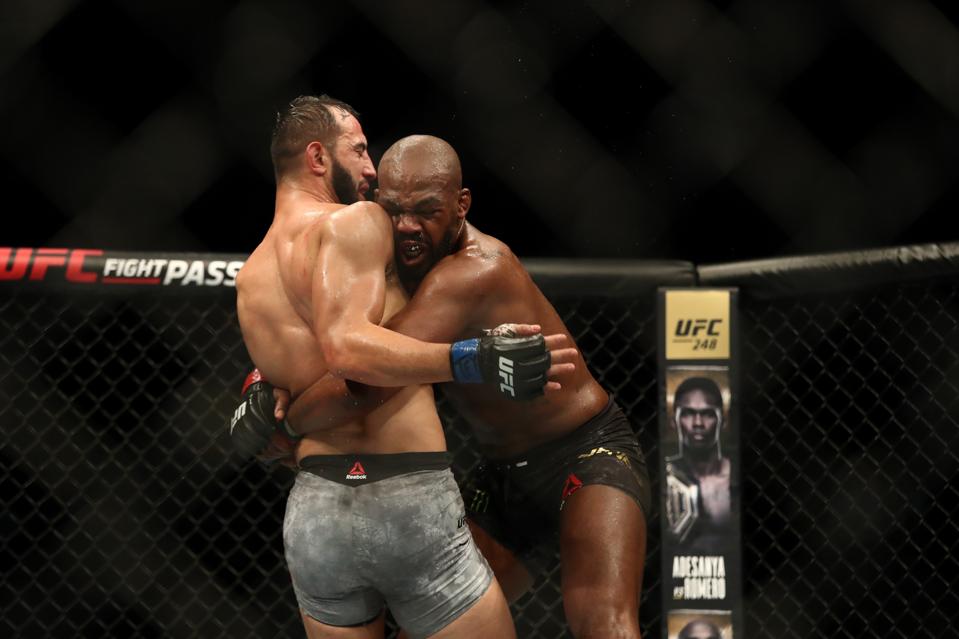 On Saturday night in the main event of UFC 247, Jones won a unanimous decision over Dominick Reyes to retain his title. However, the scorecards were questionable.

Two judges scored the fight 48-47 for Jones, and a third, scored it 49-46 for the champion. The one-point advantage is permissible, but the three-point edge seems criminal.

Jones took over the fight in the fourth and fifth rounds with his constant pressure and superior gas tank. He dominated the championship rounds, secured two takedowns and outlanded the challenger 46-34.

Clearly, that was enough to eek out the victory. If there was one of the three rounds that could be argued in Jones’ favor, it was the second.

While Reyes landed 11 more significant strikes, Jones landed some telling blows to the body and head that could have pushed a judge in his favor. Remember, judges don’t have fight stats during the fight.

Despite Reyes’ strong effort, he came up short. If nothing else, he earned Jones’ respect:

Here’s how MMA media and fighters saw the fight:

Jones is fortunate to escape with his title, and that makes two fights in a row that he’s edged an opponent who arguably got the best of him. In his last fight, Thiago Santos became the first opponent Jones has faced to earn a judges’ decision. Unfortunately for him, two others scored it for the champion.

We’ll see how long it’ll be before Jones is back in the Octagon, but he is suddenly looking a lot less invincible.

Shevchenko is Still the Flyweight Queen 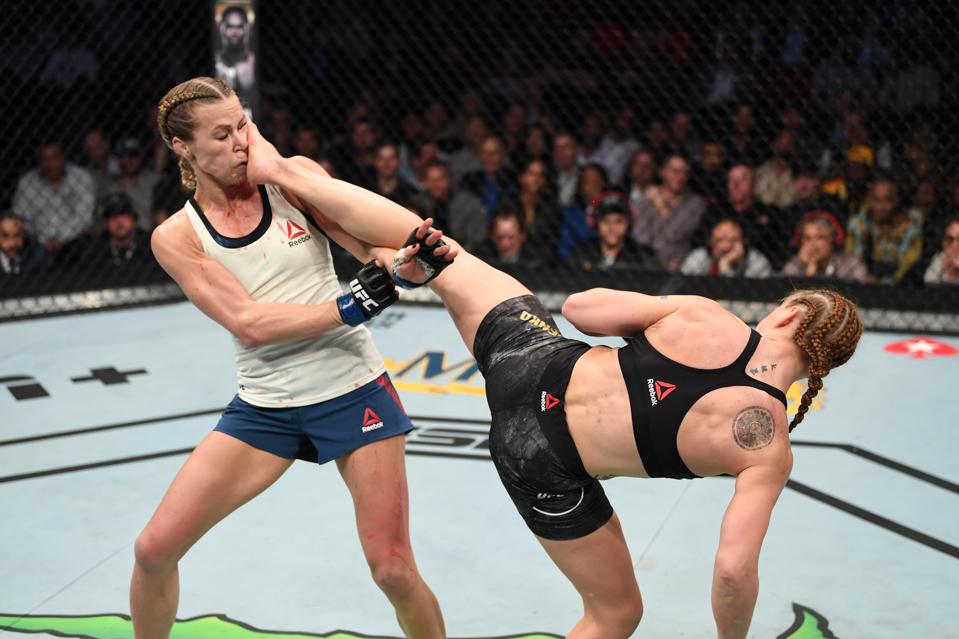 There aren’t four martial artists in the world that are better than Valentina Shevchenko–regardless of gender. The UFC Women’s Flyweight Champion proved that again on Saturday night.

Katlyn Chookagian came in as a massive underdog, and the champion made her look every bit as overmatched as oddsmakers suggested should would be in the Octagon.

If you want to see a microcosm of the way this fight transpired, just look at this kick:

You name it: speed, power, technique, confidence, Shevchenko was superior. In the third round, Shevchenko secured a takedown, took the crucifix position and pounded Chookagian until the referee stopped the onslaught.

ESPN’s Brett Okamoto was poignant with his take on Shevchenko:

The question is: who is next for Shevchenko?

It appears she has already cleaned out the division, but during her post-fight interview, the champion insisted there are still challenges on the horizon.

I appreciate her standing up for her division, but it doesn’t appear there is anyone close to her level currently on the scene.

The judges in Houston weren’t very good on Saturday night. Including the main event, there were a number of questionable scorecards throughout the evening. Joe Solis was the judge with the most egregious cards.

It began early and continued throughout the card. Several members of MMA media commented on Solis’ scores:

Here is a look at all of the results and the bonus winners from Saturday night.

Here is a closer breakdown of all the finishes from Saturday’s card. 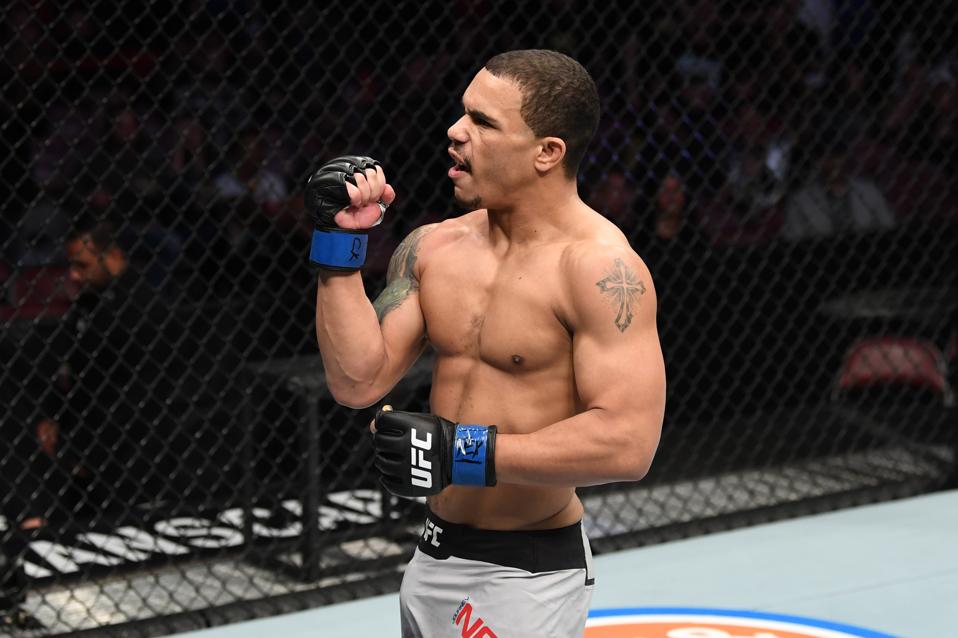 HOUSTON, TEXAS – FEBRUARY 08: Journey Newson celebrates his KO victory over Domingo Pilarte in … [+] their bantamweight bout during the UFC 247 event at Toyota Center on February 08, 2020 in Houston, Texas. (Photo by Josh Hedges/Zuffa LLC via Getty Images)

After getting buzzed in the opening seconds of the first round, Journey Newson responded with a hard overhand right that flattened Domingo Pilarte.

The force of Pilarte’s tumble caused a whiplash effect, and Newson’s follow-up shots were enough to force the referee to step in and stop the bout.

Newson was giving up a massive seven inches in height to Pilarte, but all it took was one huge shot to end the fight. Judging by the response from UFC announcers Joe Rogan and Jon Anik, I’d say Newson is in a position to take home one of the Performance of the Night bonuses. 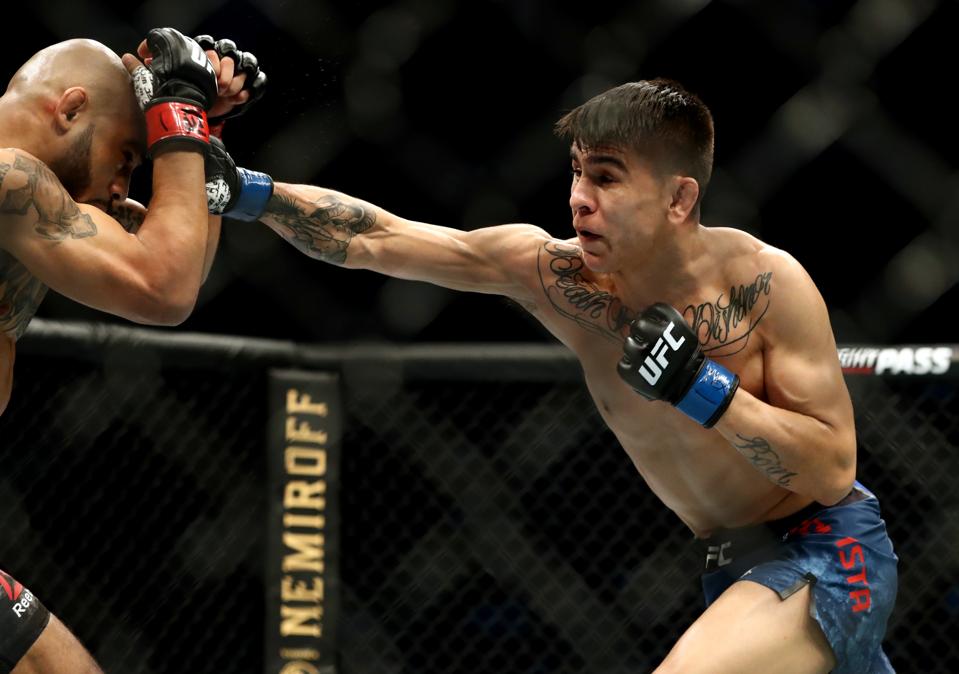 The last time we saw Mario Bautista in the UFC’s Octagon, he was in a brawl, and it would have been easy to think that was the only way he knows how to fight. We found out on Saturday night that there are layers to Bautista’s game.

With precision striking and well-placed knees, Bautista hurt and stopped the highly touted Miles Johns with a second-round TKO.

Johns came into the bout with the look of a potential championship contender down the road in the UFC’s bantamweight division. That may still happen, but Bautista represented a significant speed bump. 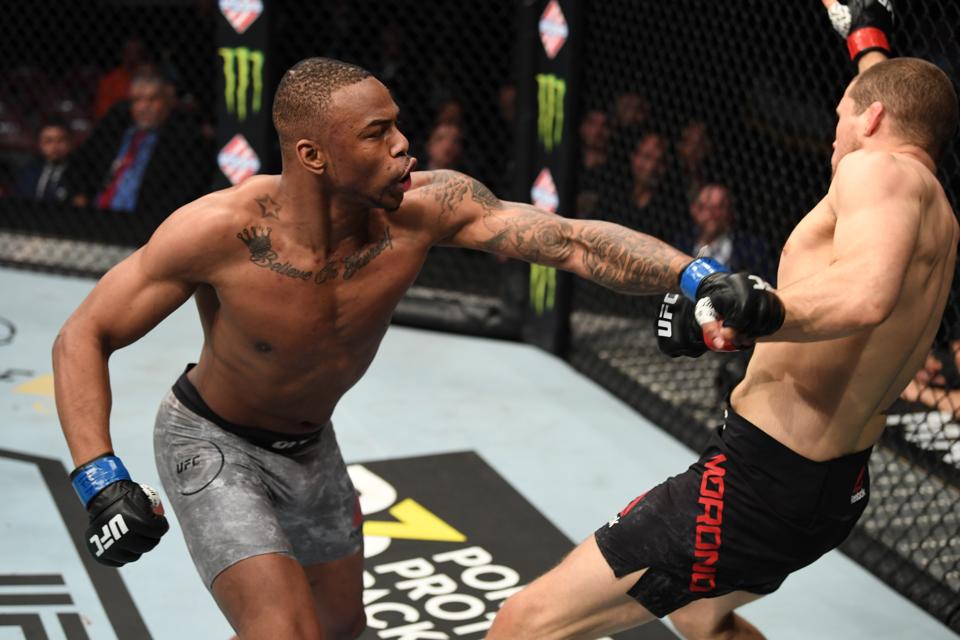 Khallin “Khaos” Williams took his fight with Alex Morono on just two-weeks notice, and it only took the UFC rookie 27 seconds to finish the veteran. The two men met in the middle of the ring like colliding bumper cars, only Khaos brought a bit more power to the collision.

With a moniker that screams charisma, and a fighting style that matches the nickname, Khaos has a chance to rack up some nice paydays. Saturday night’s UFC debut might be the first of a few Performance of the Night bonuses.

In an interview with TSN’s Aaron Bronsteter, Williams talked about some of the things he’s endured en route to the UFC. It’s a fascinating story:

Hopefully, he’s around for a long time to continue to deliver exciting performances.

This is the way most people expect heavyweight bouts to go.

Tafa and Juan Adams came out looking to bang, but it was Tafa whose shots found the mark in the first round, and the connections led to the quick TKO victory.

Both men were coming off a stoppage loss in their last fight, but Tafa clearly seems to have learned the most from his setback. Neither man is long on experience. Tafa’s win pushes his record to 4-1 overall and 1-1 in the UFC.

Adams is now on the dreaded three-fight losing streak. He’s 5-3 and 1-3 in the UFC. He may not be on the cut line just yet, but if he loses his next fight, he could be in some serious danger of being released.

There were some interesting fights on this card for sure, but unfortunately, the judges’ scorecards became a bigger story than they should have been.

Gas Glut Blows Up A Political And Economic Storm In Asia