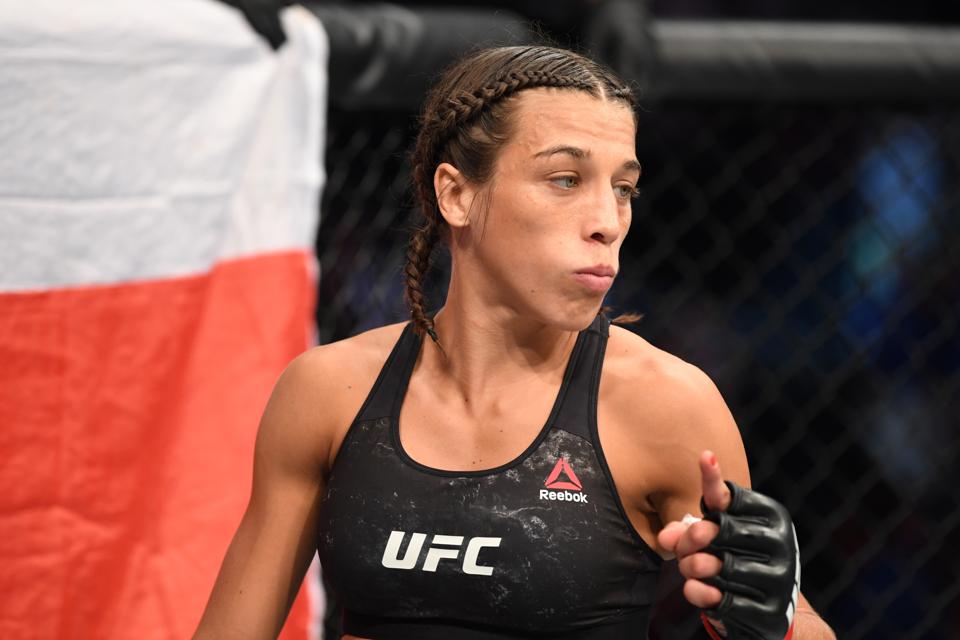 TAMPA, FLORIDA – OCTOBER 12: Joanna Jedrzejczyk of Poland stands in her corner prior to her women’s … [+] strawweight bout against Michelle Waterson during the UFC Fight Night event at Amalie Arena on October 12, 2019 in Tampa, Florida. (Photo by Josh Hedges/Zuffa LLC via Getty Images)

Two title fights sit atop Saturday’s UFC 248 pay-per-view event. In the headliner, UFC middleweight champion Israel Adesanya puts his 185-pound title on the line for the first time when he matches up against No. 3 ranked contender Yoel Romero. In the evening’s co-main event contest, women’s strawweight titleholder, Weili Zhang, makes her first defense of the 115-pound title when she faces the No. 4 ranked contender, Joanna Jedrzejczyk. Jedrzejczyk, who is a former UFC 115-pound champion, defended that title five times.

“Since I lost the belt, I became even more obsessed than when I was champion,” Jedrzejczyk told MMA Fighting ahead of Saturday. “With the belt, physically having the belt or not, you can act like the champ. You can be the champ. I made it to the elite. Not once but six times. I miss it.”

“I’m going to say it again, I’ve been in this business 17 years,” Jedrzejczyk added. “Multiple time Muay Thai and European champion, six time UFC world champion and this one victory on March 7 is going to be bigger than my whole fighting career, all the titles, everything, all the accomplishments. It’s going to be bigger. I’m looking forward to stepping into the Octagon in the best shape ever and taking it.”

Below are the historical closing odds for Jedrzejczyk’s UFC bouts.

The King Of Ancillary Revenue—How Chaos, Confusion And Low Prices Created One Of The Most Profitable Airlines In The World

How Does an Owner Of A Limited Liability...

Regulation Crowdfunding, Gen Z And The Future Of...