Breaking
How To Get Your Startup Business Off The...
How To Create A COVID Safe Construction Site
How to Make a Good First Impression at...
Biden Was Right. The Hispanic Market Is Incredibly...
Plan To Buy An Electric Car? Is A...
Covid-19 Death Toll In U.S. Passes 200,000
Apple iOS 14 Has 25 Great Secret Features
5 Decisions That Will Increase Your Chances Of...
Coronavirus Is Shaping Up To Be Very Bad...
TikTok: Why Is Everyone In A Tizzy?
Is It Time For A Bank For Women?
As Israel Locks Down, Its Health Tech Sector...
California Increases Homestead Exemption In New Legislation
Buying The Bulge Is Dangerous
5 Strange Things Happening Right Now In The...
The Best Blogging Platforms (In-Depth Review)
How Will The Coronavirus Impact Your Finances?
How Xbox Series X Will Attempt To Avoid...
Virgin Orbit Seeking Over $100 Million As ‘Jaw...
Home Business UFC 251 Stats And Video Highlights: Kamaru Usman Vs. Jorge Masvidal
Business 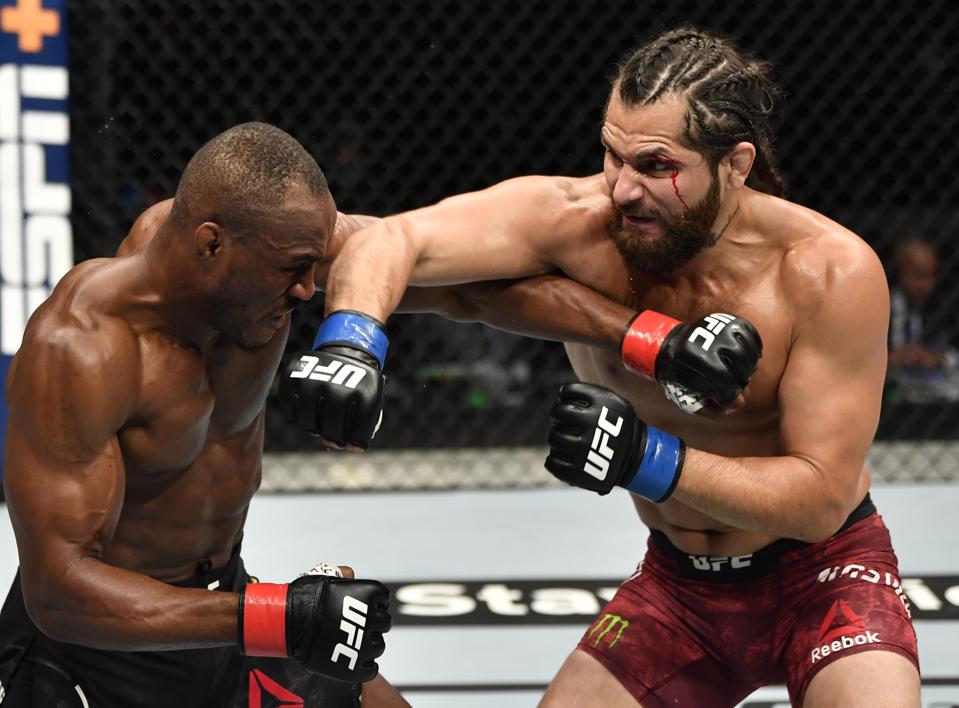 The odds were against Jorge Masvidal continuing his run of knockout wins when he stepped in on short notice to face UFC welterweight champion Kamaru Usman. Masvidal went 3-0 with three knockouts in 2019, reinvigorating a career that began back in 2003. Usman ended that run with a unanimous decision win in the main event of last night’s UFC 251 pay-per-view card.

Masvidal was aggressive early in the bout, but Usman slowed the pace of the fight when he caught one of Masvidal’s kicks and took the challenger to the mat. For those expecting Usman to engage Masvidal on the feet, that early takedown was a sign of things to come.

Usman, who expected a matchup against Gilbert Burns at UFC 251, did not take many chances against Masvidal, who stepped in last week after Burns tested positive for COVID-19. The defending champ did a great deal of work against the cage, where he used foot stomps and body blows while making Masvidal carry his weight.

Usman’s approach was not especially popular with fight fans, but it was safe and effective and in the end, the style earned him a unanimous decision victory.

With the win, Usman tied Georges St-Pierre’s UFC record 12-fight welterweight winning streak. Usman know has two successful title defenses. The odds are high that his next fight will come against Burns.

After the bout, Masvidal was very disappointed in how the fight played out.

“I just feel like I let a lot of people down. It was a (expletive) performance,” Masvidal said at the post-fight press conference.