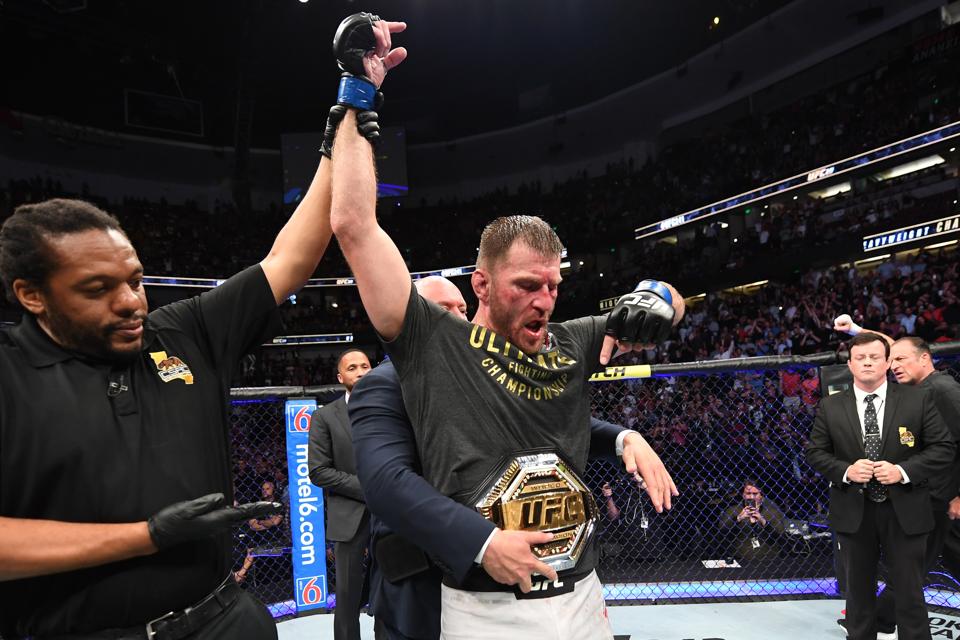 ANAHEIM, CALIFORNIA – AUGUST 17: Stipe Miocic celebrates his TKO victory over Daniel Cormier in … [+] their heavyweight championship bout during the UFC 241 event at the Honda Center on August 17, 2019 in Anaheim, California. (Photo by Josh Hedges/Zuffa LLC/Zuffa LLC via Getty Images)

Stipe Miocic and Daniel Cormier face off for the third and likely final time when they meet in the main event of UFC 252. The pay-per-view card takes place on Saturday. The heavyweight matchup headlines the ESPN+ streaming PPV event from UFC Apex in Las Vegas.

Miocic had set a UFC record with three consecutive title defenses when the two met in July 2018 in the main event of UFC 226. At the time, Cormier was the UFC light heavyweight kingpin. Cormier became a dual champ when he knocked out Miocic at the 4:33 mark of the the first round of that contest.

The two faced off a second time in August 2019. Miocic evened the score in that contest with a fourth-round knockout win over Cormier. The win was his UFC heavyweight record-tying fifth title fight victory.

Miocic made his UFC debut in 2011. He was 6-0 with six stoppage victories. Miocic won his first three UFC bouts. His first career defeat came in 2012 when Stefan Strive knocked him out. Miocic went on another three-fight winning streak before he lost a decision to former champion Junior Dos Santos.

Miocic’s next run of victories included his three-fight stretch as the UFC heavyweight champion. HIs streak of victories ended at six when Cormier knocked him out at UFC 226.

Below is a look at Miocic’s closing odds for his UFC career.